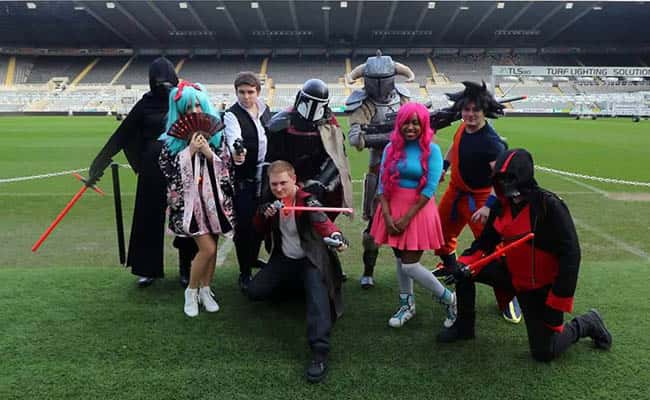 In just under a month’s time, SunnyCon will celebrate its fifth birthday in a new venue. The convention was first held in Crowtree Leisure Centre in spring 2012. Over 900 attendees turned out – a far cry from the 300 expected. Since then they’ve had quite a journey, moving from Crowtree to Seaburn Leisure Centre, to the Pullman, and now finally St James’ Park in Newcastle. Chairwoman Donna Yeoman and Ambassador Michael Tuckwell shared some of their highs, lows and plans for the future.

So what made Michael and Donna want to start SunnyCon?

“We were running a stall selling anime merchandise and we went to other conventions and the excitement from that made us want to run our own.” Michael explained: “We love to make money like the others do, but we focus more on the fandom; it’s a bit a selfish of us but it’s more of a convention for ourselves than anyone else.”

And although SunnyCon is now going strong, with over 2500 expected attendees, the convention has travelled a long and rocky road to get where it is today.

“After SunnyCon 2, we found that a large amount of money had been stolen. The thing was we had the ticket desk right at the front of the Seaburn Centre and we had a CCTV camera on it, and when it came to the final count we were about £5000 or £6000 short of what we’d expected. So we thought, oh ok we’ve got the camera footage there, but then it turns out that the camera didn’t work. So we thought that we’d have to make it from the next year’s ticket sales and the Seaburn centre were fine with that as we only owed them about £4000,” Michael said.

“They basically said pay whenever you have it because they understood, “Donna added.

But things only got more complicated from there.

“It got to Christmas and we’d paid around £3000 of it off, we were just about to hit the biggest period of ticket sales and I had an email two days before Christmas saying somebody else has booked the venue… We thought thank god we’ve got a Plan B, so for SunnyCon 3 we moved everything next door to the Pullman. We took it from there and moved everyone over, and then when it came to the weekend of SunnyCon, we had a look [at the Seaburn centre] just out of curiosity and nobody had hired [it] out.

“We were abandoned, so that’s part of the reason we moved to Newcastle, that and you actually feel like you’re wanted there. For the first two years [Sunderland] council was happy to be involved as long as they got some kind of reflected glory off it, but as soon as Seaburn left us, we pleaded for help at one point because the convention was on the brink and we got nothing back. It’s through hard work and perseverance that we’re still going.”

Not only does SunnyCon 5 have the distinction of being the first SunnyCon to be held in Newcastle, there is also something else. (Something that avid Sunderland fan Michael, is still coming to terms with), but it’s one of the first conventions in the country to have a Japanese voice actor as a guest, Fumiko Orikasa (Rukia Kuchki in Bleach).

That said, Orikasa may be one of the more unusual voice actors to grace the stage at SunnyCon, but she’s hardly the first:

“We noticed that in conventions around the country no one was really asking voice actors and we just sat down and made a list of all the voice actors we’d like to meet in real life and Chris Sabat (One Piece, Dragonball Z, Fullmetal Alchemist) and Veronica Taylor (Ash in Pokémon) were the top two. It was a case of just asking and they came along,” Michael said.

While they were hard pressed to choose, Chris Sabat remains Donna’s favourite guest, while Michael on the hand chose Quinton Flynn (Metal Gear Solid). Donna also revealed that they are looking to get Chris Sabat back next year.

“It’s weird because we expect voice actors to come over, do their bit for fans and then disappear. But we’ve kept in touch with most of them and we know them more as friends than people we pay to come over.”

Unfortunately, not every guest is such a pleasure to host. Both Michael and Donna have their fair of horror stories – but none that they were willing to share…

“There’s absolutely loads, but none that I could say out loud without getting sued,” Michael laughed.

But despite awkward guests, financial difficulties and lost venues, SunnyCon is still going strong, with big plans for the future, as Michael elaborated.

He said: “It’s been weird and refreshing at the same time because I’m a huge Sunderland fan and going into St James’ Park it’s like, no, I shouldn’t be here, it doesn’t feel natural still, but that’s just the football side of me, the business side knows it makes sense.

“The staff are excellent at St James Park, they’ve got a huge 5-10 year plan for us, to the point where we’ll actually take over the whole stadium by the end of it and take over the surrounding areas and make the whole city into one big weekend festival.”