The World Famous Superhero Plumber, Mario “Super Mario” Mario (yes that is his last name) returns to the race track, with a few friends on the shiny new nintendo switch. 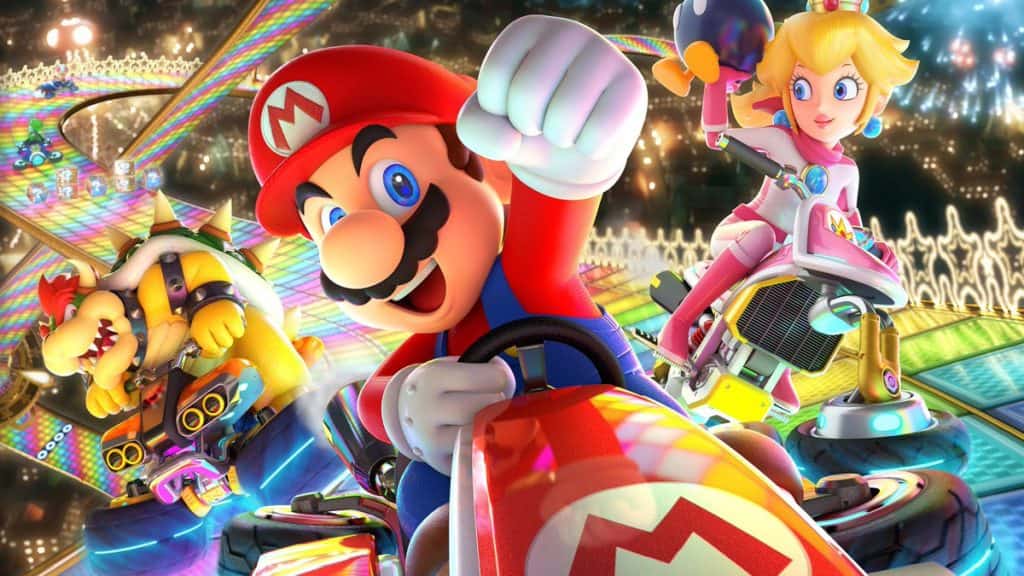 Now that the switch is out, it is proving to be a fairly big hit, and in april its only gonna get bigger with the grand return of Mario Kart.

Mario Kart 8 Deluxe is a re-release of Mario Kart 8, with all dlc, and some new features.

First new addition are new racers, including fellow nintendo champion, Link of the kingdom of Hyrule, Isabel from Animal Crossing, and new nintendo champions the Inklings of Splatoon, although it seems that Professor Gadd’s security needs a little work as King Boo is back and he’s brought a few of his Boo Buddies, and back from the grave is Dry Bones, Dry Bowser probably invited him, and finally the Koopa Prince himself is back, Bowser Jr.

Another new feature is the fact that now you can hold two items at once, this is due to the return of a classic item, Boo, the Boo will loan you his spectral powers, turning you invisible, all the while going off to steal a rival’s item, The Feather makes a return giving you an upward attack, perfect for getting more air off a jump though it’s exclusive to battle mode, in addition the new items introduced in Mario Kart 8 are also going to be returning, including the Piranha Plant which chomps everything in front of you, including shells, other players and even blooper, the boomerang flower, which will make a comeback both in the game and in the series as a whole, and finally the ultimate defence mechanism, the Super Horn, it can spin out other players and destroy all incoming items, Including the dreaded Blue terror itself the Blue Shell.

Battle mode returns with a tonne of arenas and game modes, including balloon battle where you have to steal the other player’s ballons to win and that may just burst their bubble, speaking of which, a similar game mode is Bob-omb Battle, similar to ballon battle but Bob-ombs only, try this game mode out it’s a blast, Coin Runners is where players have to collect coins to win, try it out and catch the Coin-tagion, In Shine Thief hold on to the shine to gain points just try not to lose it or it’ll be lights out, Are you a renegade for life or are you the law, find out in Renegade Roundup, its a game you wont Dredd to play because the Mass Effect of this game mode is fun.

For challenge seekers, there is the new 200cc class for insane speed and ruthless A.I. breaking is crucial for this difficulty, in addition 200cc is also compatible with time attack, so if you want to test your mastery of the courses, go for it, but in a 200 cc grand prix prepare for 200 course clashes.

Battle Arenas make a grand return including the new Urchin Underpass track from Splatoon, others include Battle Stadium featuring anti gravity and a large anti gravity circle in the centre, this is one track where going round in circles is a good thing, Sweet Sweet kingdom is based around the Dessert Desert featured in super Mario odyssey, if you can out smart and out last the other racers, you’ll earn yourself a sweet victory and leave opponents with a sour defeat, Dragon Palace is another arena based on odyssey, with two huge dragon statues in the centre, on this map, be sure to find out who is the crouching tiger and who is the not-so-hidden dragon, Head to space with Lunar Colony, based around Mario Galaxy I believe, leave your opponents in the moon dust and reach for the stars on this map, other wise you’ll be blasting off again, return to Wuhu Island town to battle it out for the right to say Woo Hoo on the winners podium, Luigi’s Mansion is now open for all racers looking to test their metal on this spooky track, play it wise and play it safe and your enemies wont stand a ghost of a chance, Battle Course 1 is a little bare bones but be sure to block out your opponents and claim victory.

Overall, there is a lot to look forward to in this new chapter in the Mario Kart series, Mario Kart 8 Deluxe arrives April 28th this year, so suit up get your licence renewed and I’ll see you on the race track