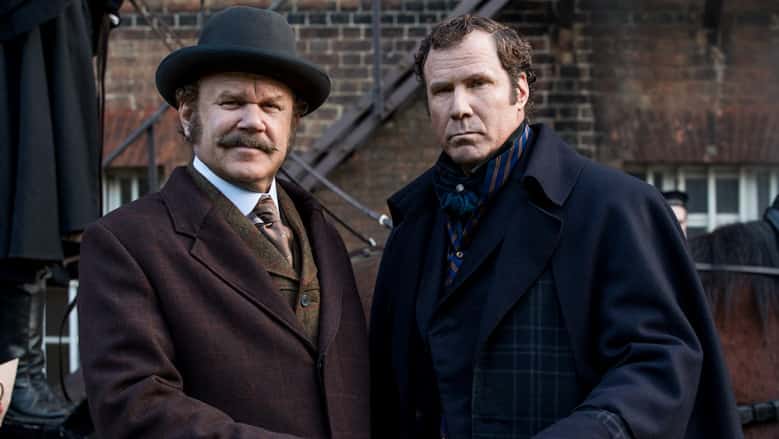 Can we please take Will Ferrell out back and put him out of his misery? The man’s not made a good film since The Lego Movie, and before that it’s a sea of films ranging from ‘meh’ to ‘how did this get made?’.

And Holmes and Watson, I’m sad to say, falls on the ‘How did this get made?’ end of the spectrum.

Holmes and Watson is about Sherlock Holmes and John Watson (Or some farcical pejoration of them) trying to save The Queen’s life before she’s killed by a mystery killer (I’ll save you the trouble of watching the film and tell you that the killer is the pair’s housekeeper, Mrs Hudson, in a shocking, completely non-sensical plot development, which is revealed after a random abysmal musical number. Yeah, you read that right).

It’s an abysmal plot, completely non-sensical and, worse still, boring. The ‘comedy’ has to be seen to be believed. It’s a bastardisation of what Ferrell and Reilly were like in their heyday, something that will make you think “Maybe we’ve broke them”.

The cast is in a word, awful. In another word, Dismal. Will Ferrell and John C Reilly haven’t been funny in years, and it really shows here. None of them garnered a single laugh for me, nor did any of the so-called emotional notes work in any capacity. Sherlock Holmes and John Watson are incredible characters in literature, but here they’re utter garbage.

They also managed to drag Rob Brydon into this mess, which makes me extremely sad to see. Usually, he’s one of my favourite comedians, but here he’s given awful lines that even he can clearly tell are utter trash.  There are love interests involved in the film but the characterisation is so bad, their acting so dreadful, that I refuse on principle to give the actresses playing them the satisfaction of somebody searching their name.

Oh and Mrs Hudson is quite possibly one of the most dreadful villains of any media involving the character since Holmes’s inception.

And boy, as a comedy film, this thing falls apart fast. It relies on puerile child-like humour, something that would work with any material other than Sherlock Holmes (need I remind you he’s the greatest detective?) and John Watson; they occasionally attempt meta and highbrow jokes but these are also awful. It’s clear that writer/director Etan Coeh (Clearly NOT Ethan Cohen in disguise, sadly) had absolutely no idea what he was doing with these characters, nor what he wanted the tone of his film to be.

As a film, Holmes and Watson has no redeeming qualities and could quite possibly cause lasting brain damage to any poor soul who is unfortunate enough to watch it. It could easily be used as an implement of torture, forcing people into telling you what you want to know: they’ll probably cave, because anything is better than this disaster.