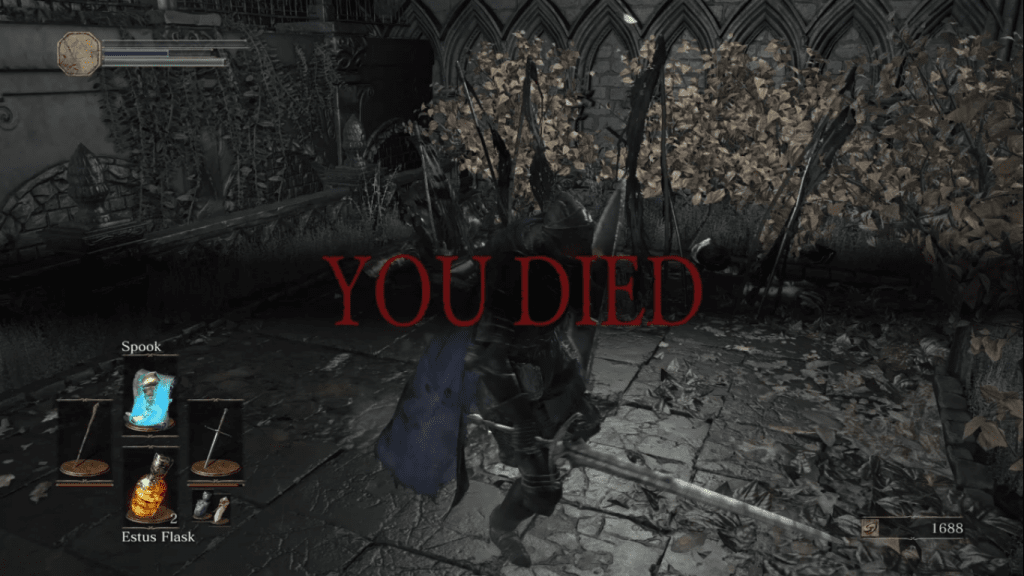 First thing to address: is Dark Souls 3 a tough game? Yes. Is Dark Souls 3, and every other Souls game of that matter, so ridiculously difficult and punishing that only a finite few can ever hope to complete it without the death count reaching six figures? No.

Don’t be taken in by the obnoxious marketing. The Souls series goes beyond its professed difficulty, providing players with intricately designed connecting maps, satisfying yet tactical sword-play, its immersive implementation of multiplayer and rich tapestry of world lore and mystery – waiting to be discovered.

So, understandably, the hype for the third game has been pretty big.

This game’s setting is Lothric; a grand fortress-strewn land of hollowed enemies, dragons, gorgeous vistas of disparity and just general hostility all-around from pretty much everything.

Many times during the journey you’ll be sure to happen across gorgeous skylines of the places you’ve yet to visit, making you feel insignificant and sucking you into the grim-dark fantasy. You aren’t so much experiencing a story, but rather experiencing a lovingly crafted world, where your adventure is one of many.

The ingenious design of each area and how each one ties into each other is ever-present in the third instalment – creating pseudo checkpoints in the form of shortcuts as not to ruin the immersion.

Secrets are well-hidden, but not so much that they’re inaccessible, retaining the feeling of discovery and wonder that every RPG on this scale should have. 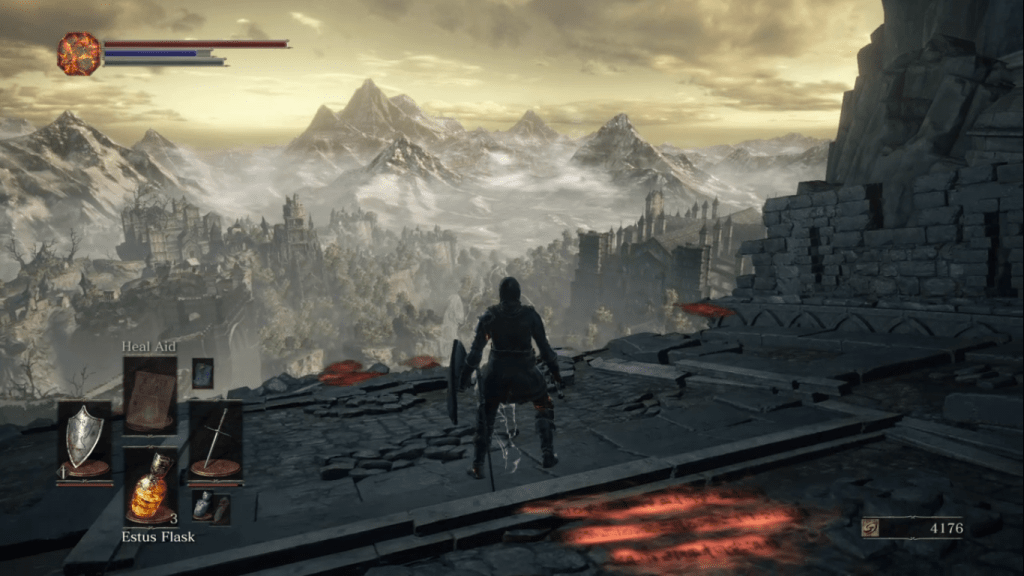 Your goal throughout the game is to link the fire of a dying world by collecting the remains of the Lords of Cinder and returning them to their thrones. The Souls series has always been one that allows players to choose their own involvement in the story. Weapon and item descriptions spin tales of different factions and characters in the game, creating this huge lore that players can find themselves getting lost in.

But rarely will you ever HAVE to read item descriptions if you don’t want to. Those who aren’t too fussed about the mythos can boil Dark Souls down to: fight bosses, get things, explore areas and pillage – and it still makes for an immersive experience.

Along the way you’ll bump into some genuinely likeable NPCs, like Greirat the Thief and the bumbling Siegward of Catarina that will aid you on your journey, be it through free items or merchant services.

There’s also a fair share of invading NPCs who will want your guts for garters and some less-than-helpful allies, depending on what path you decide to go down.

Your choices have consequences in Dark Souls – giving certain characters items can make them change their attitude towards you, or potentially put you or them in mortal danger. Characters move about, so quest lines reward back-tracking and thorough exploration in order to continue their stories.

The cryptic nature of the game makes this somewhat irritating at times when something you did renders an characters services or quest lines inaccessible for the rest of the play-through. This shouldn’t be a problem if you take your time and look thoroughly for characters and players notes for clues if you’re stuck, because without them you could be deprived of certain spells and items. There’s too much to be able to see everything Lothric has to offer in your first play-through – you’ll be clambering for new game plus when the time comes around.

The enemies you encounter along the way will disgust you, fill you with dread, and cut you down if you move a hair out of line. They make up a diverse roster of weirdness, such as the poison slugs, giant enemy crabs and swamp sorcerers that look like something out of Fraggle Rock. Some of the most challenging moments in Dark Souls 3 is the initial struggle through an area of baddies, and continue to annoy every time you have to run past them to have another go at fighting certain bosses.

Some enemies can drain your health simply by looking at you, which is pretty cheap – but is good because it forces you to use more than just all-out aggression when battling through monsters.

Boss fights are adrenaline pumping and memorable; from the unrelenting Undead Legion, to the grotesque, curse-riddled tree abomination that kept crushing me. They present a tough challenge, they can be trumped by those willing to learn when to dodge, capitalize on weak points, and persevere in the face of seemingly impossible odds. And even if you’re struggling with one boss in particular, you can always summon NPC phantoms and other players into your game, to take part in jolly co-operation. 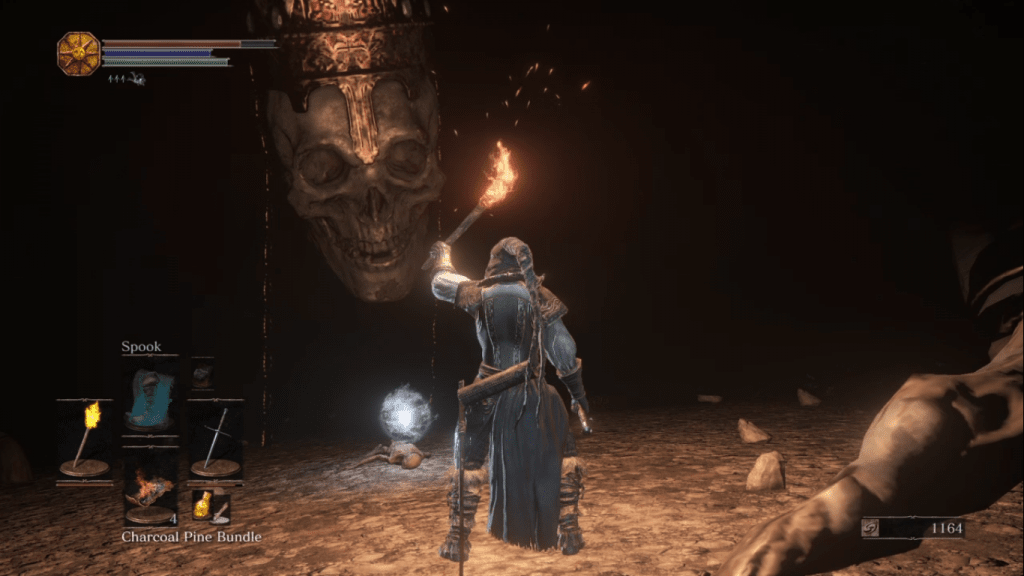 The tactical shield and swordplay of Dark Souls 1 and 2 has been fine-tuned and built upon in 3. You get the same smooth combat that the franchise is known for – where you feel the weight of the damage you’re inflicting and can dodge on a dime (providing you’re not too heavy).

Nothing feels ham-fisted to wield if you give it enough time. Yes, you be killed several times, and it may seem overbearing at times, but learning what you did wrong, exercising caution and tactical thinking, will ensure that you can kill everything with anything.

The variety in swords, spears, halberds, sorceries, miracles and a whole host of other unique trinkets, will have you spoilt for choice. Each one has a story behind it, and a personality of its own, like the wild flailing of the claws, or the thunderous slam of the Zweihander.

Even with countless instruments of death to choose from, you’ll undoubtedly latch on to a favourite. If you haven’t already guessed, my favourite was the ridiculously versatile Estoc sword.

On top of regular and heavy strikes, one-handed attacks and two-handed attacks, Dark Souls 3 also includes a stance or ability for each weapon that uses a bit of your magic bar (a.k.a FP). This can be used to pierce armour, parry others attacks, perform a “spin” move, pretend you’re going to do something but actually don’t etc.

There’s too many to get into right now, but these weapon skills create bigger move-sets that add a whole new dimension to the games combat – and give players a lot to experiment with. 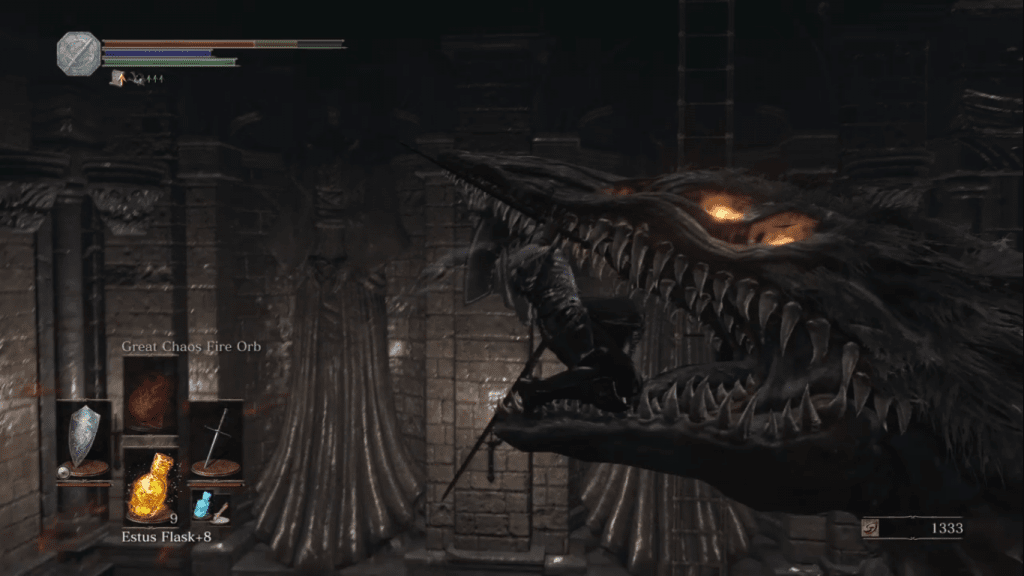 You’ll be teleporting to the Firelink Shrine frequently (with the much better fast-travel system than Dark Souls 1s) to fine tune your character by levelling up, reinforcing your weapons with titanite and gems you’ve found along the way, and buying from the merchants you meet on your travels.

The game does a good job of opening itself up in terms of character building. Sure, you start off picking a class with a name like “Pyromancer” or “Cleric” or “Knight”, but you aren’t married to any of those job titles.

If you want to go from being an axe-wielding, muscle bound warrior, to some sort of wizard-priest hybrid, you can take steps to make that happen.

The simpler weapon upgrade system means that you can change a weapons advantages to coincide with what you’re character build is like. For example, if you’ve piled a lot of souls into your strength stat, and a weapon doesn’t scale very well with the strength stat, you can infuse it with a gem that makes it scale with strength.

The sheer variety in loadout, gem infusion, stat management and play-style makes Dark Souls 3 all the more re-playable. You’ll want to make as many varying characters as you can to prepare yourself for the PvP.

Cryptic as it is, Dark Souls fully encourages co-operation, even in an indirect manner. The multitude of messages that are scattered around the world will mean that you won’t miss the missable, like illusory walls or potential traps. This gives a great feel of community – making you feel like you have people out there looking out for you. Until one of those notes leads you off a cliff.

The PvP fights also come with this duality. Dark Souls’ unique online matchmaking imposes sort of a do-it-yourself vibe – you get summoned into someone’s world, and it’s down to the other combatants if they want to start with a bow and fight honourably, or just bum-rush the poor sap who tried to invade.

Most times I got summoned to fight it was in aid of a makeshift gladiatorial championship – where people politely queued up to have their face-to-face bout, and then winner stayed on. There’s an unspoken etiquette to these fights, which makes them tough but fair when the rules are followed, and hilarious when they’re not.

Gate-crashing these fight clubs happened, resulting in a flurry of reds, yellows and pinks all gunning for each other, making for an absurdly chaotic experience. 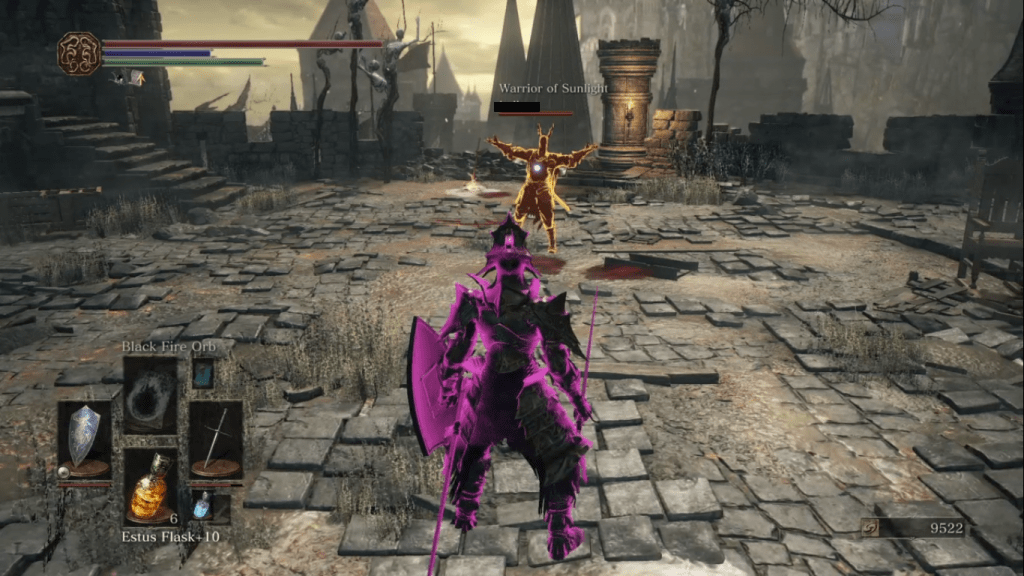 You can even adopt disguises in-game, pretending to be a co-op partner to infiltrate a squad, or even an inanimate object to hide from your would-be competitors – prop-hunt style.

There’s added incentive to duke it out only with the covenants you can join, but a few of these were a bit harder to get working than others. Summonings were easy enough with the Mound Maker and Warriors of Sunlight covenants, but the covenants that summon you to other worlds automatically yielded poor results. Aldritch Faithful summoned me about three times after hours of trying and Watchdogs of Farron didn’t summon me once

The game puts you with people close to your level, but after a while I was sick of waiting around for summons and progressed in the game. New game plus still fail to summon me for Watchdogs of Farron at all, despite my best efforts, although this could be subject to change in the future.

Veterans will notice the repetition of certain set-pieces and the return of old items and weapons. The game seems to be acting as a redux of the first Dark Souls – playing off of nostalgia and fan service to ensure a positive response.

Just like in DS1, there are still four main lords you have to harvest the souls/ashes of, Farron Keep is Blighttown with a playable framerate, there’s another catacomb full of irritating skeletons – just to name a few similarities.

This doesn’t tarnish the finished product in any way, but all praise aside, if you’re a Souls fan looking for a brand new experience, you may not find it within Dark Souls 3.

On the other hand, if you’re looking for Dark Souls 1 again, but with a load of bells and whistles attached, then this latest instalment will definitely be for you.

Overall, Dark Souls 3 is a huge game that arms you with a fine-toothed comb and shouts, “Get to work”. The game accommodates newcomers as well – easing them into the abyss and keeping them well and truly lost in it for hours on end. This bleak universe is one you can be proud to be a part of.