There is no adventure or exploration in Uncharted 4. Nathan Drake has settled down and got himself a day job with a salvage company. He’s happily married and lives a quiet life in New Orleans. That’s it, no more adventures for our hero. The end.

Well, would you look at that? Naughty Dog drop a naughty twist and Drake is summoned back into his extraordinary life. This time it’s more of a fray from the get-go as the stakes of not getting the pirate booty are more serious than just disappointment.

Specifically the pirate booty is that of the real Henry Avery. Uncharted yet again takes from actual history and delves into pseudo-history so well that it will make you doubt what you know and just make historians mad. This allows Naughty Dog to deliver a believably grand treasure hunt as snippets of real history tie together far-fetched revelations. This side of the story entwines with established and new characters and their agendas – even if said agendas are cliché – of course, it’s good versus bad but Uncharted is more about the journey.

A Thief’s End looks incredible. The truly beautiful locations, scenery and architecture are impressive and justifies the photo mode. It could be considered a bit sad taking pictures of a place you visit in a game but not in this one. It is easy to get carried away with the photo mode which might kill your momentum, however, it’s entirely up to you when to use it. 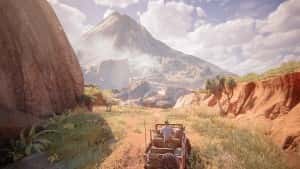 In-keeping with the Uncharted series and Indiana Jones style films, you slowly make your way through ruined labyrinths solving often dangerous puzzles and doing impossible parkour to get to a chamber which reveals some important information – only for the bad guys to somehow turn up to steal your thunder. This certainly makes you hate them more. Uncharted has always and still does dabble in this kind of ‘game logic’.

Another example of this is when I came across an arrow on a beach and assumed that was the correct way to go. It was, but only after backtracking and climbing right to the top of a tower, so I could look down on the first arrow! This can be excused as trigger points need to be cleared so the game knows where you are, and seeing as the environment is open this situation is likely to happen.

Some things are just too convenient to let slide though, like the copy and pasted boxes on casters throughout the entire world that you need to climb specific places. Your partner, who you are with though most of the game, also conveniently saves you from plummeting to your death countless times. Uncharted and similar aforementioned movies have taught you to expect a betrayal from anyone so seeing, as you have omnipresent partners you’re always suspicious to the point you’re even expecting a double cross from the lemurs you come across in Madagascar.

Thankfully your partner, or non-player character (NPC), doesn’t have death wish! They actually hold their own in a gunfight and even slot a few baddies. Not like most games where you have to babysit a suicidal Faberge egg of an NPC through a war zone.

3D platforming is without a doubt a major part of Uncharted. Thankfully (again) the NPC is not a massive liability in this area. You and the NPC climb almost everywhere, especially, now you have a grappling hook which gets Spiderman levels of ridiculous.

You need to get from point A to point B, which is about 100m away, but not before the game has you clamber through the rest of the alphabet first. This seems like a tool to show off more of the scenery which isn’t necessarily a bad thing. Or perhaps Nathan Drakes idol is Alain Robert, the French guy, who climbs buildings with no safety equipment for a laugh.

It’s a relief that Uncharted 4: A Thief’s End is a triumph as most media rarely survives such hype. But it feels like Naughty Dog panicked just a little bit by feeling the need to keep the online multiplayer mode. This game doesn’t need to contend with other triple-A title multiplayers when the story is beyond good enough on its own merit.

The changing pace of this adventure – from parkour platforming and cover based shooting to exploring the amazing environments, solving ancient trials and the charming nod to Naughty Dog’s past with a playable Crash Bandicoot level – makes Uncharted 4 a success.