Snap shots of the colourful Snowdogs have inundated social media and encouraged thousands throughout Tyne and Wear to get outdoors and track down these pieces of art.

There are over 150 Snowdogs to be found across Newcastle, Gateshead and Sunderland, and there’s a dedicated app to help you find them. Inspired by the much loved animation of ‘The Snowman’, the artworks are made in collaboration with ‘Wild in Art’ & St Oswalds Hospice. The money raised from a community project in an auction of the dogs in December will be donated to support the Children’s Hospice.

In a similar way to Pokemon Go, the app allows users to participate in discovering the art and to even to visit parts of the North East that they haven’t been to before, encouraging people to ‘become a tourist in your own city’ before they download.

Lucy Adams from Gateshead said: “I saw loads of the SnowDogs yesterday and it was adorable seeing all of the kids get so excited about it. One little boy came up to ask me if I knew where any were so that he could go and see them.

It was a lush way to spend my weekend home from uni, definitely makes you appreciate the North East.” 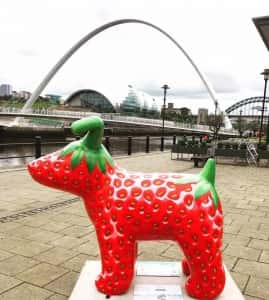 Above is one of many Snowdogs that you can find on the Snowdog trail, whilst thousands have also taken in and visited iconic North East landmarks, including the Sage Gateshead, The Baltic, Central station and North Shields Fish Quay.

Jenny on Facebook commented ‘The Snowdog trail took us to a park we had never been to before, great to get out and about- and great park!’

Social media has been overrun by enthusiastic people from all walks of life posting their photos and enjoyment when tracking down these beautiful pieces of art. The project has also been a platform for artists to showcase their work as each Snowdog is designed by an individual artist- giving variety to those going out to view them.

My Metro (www.metro.org.uk/nexus) is the headline sponsor of the event, giving people the means and accessibility to travel around the Tyne and Wear to view these striking pieces of artwork.

Paul Walker, customer service director at DB Regio Tyne and Wear which operates Metro on behalf of Nexus, said: ‘The great North SnowDogs trail has captured the imagination of our whole region and we’ve already started to see the benefits since it was launched two weeks ago. The people of the North East, and even from further afield, appear to be embracing the trail which is fantastic to see’’

You can get outdoors to see these colourful SnowDogs for yourself on the streets of Tyne and Wear until November 2016, when they will then be auctioned off in an event in December 2016.