After the release of Nintendo’s new retro replica console of the 1985 ‘Nintendo Entertainment System’ which hit shelves on November 11th 2016, it was clear to see that there would be a struggle for every customer desperate for a piece of the past to get their hands on one of the consoles.

The console which was described as ‘The best gadget to have since 1985’ (referring to the original release of the original console) seems to only be a luxury of the lucky few as supply of these miniature leisure goldmines quickly disappeared like snow on a sunny day. The supply completely ran out on the official Nintendo website and also retail stores such as Argos, Amazon, Game, Smyths, Tesco and many more as customers desperate for the console, which has much unexpected hype, run to the stores to finally have one in their hands to call their own, some customers acting like wild beasts to get one.

Now that the supply is ran out, and demand and hype does not appear to be disappearing, people are taking to social media looking for guidance, any information about where they can acquire one of the consoles. Twitter user @MardiHendrix asks the Twitter community directly if any other uses know any place where he can buy one of the mini NES consoles.

Another Twitter user, @TPrengel, states that during the time that it took for him to add the Console to his online shopping cart on Wal-mart’s website and then proceed to the checkout, the console was already out of stock.

Yet another Twitter user, @Caroleeleee, expresses her anger on the social networking platform, stating that she is angry that she cannot acquire one of the consoles because of their unexpected popularity.

The result of the remaining high demand and the extreme lack of stock of the product anywhere has lead to people who have already bought the console realising that they could potentially earn a quick buck from the rule of ‘supply and demand’, one that evidently shows that Nintendo cannot always follow efficiently by the lack of stock and their under-estimation of demand. Customers who have bought the Console have been advertising their console on eBay for people who were not lucky enough to buy one before supply ran out. In some instances, they have been selling the retro games console for 200% to 300% the original price on the official Nintendo online store and retail stores. Despite their unreasonable price, people who desperately want the console are still bidding for the games console, ramping the price up further. 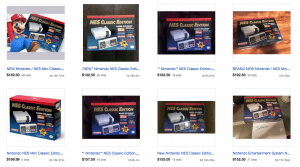 Also, considering the original price of the console, and the demand and hype that was associated with it, it was a very cheap product, and some people, such as Darren Rovell, a sports business reporter for ESPN, say that the console was ‘badly mispriced’ at $60 (£48.34 at current exchange rates at time of writing) and could of been sold for a much higher price, meaning that Nintendo have potentially lost profits, underestimating what people will pay for a blast from the past of retro gaming. 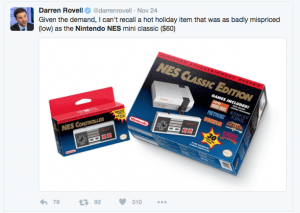 However, anyone who is panicking and still desperate to own one of the game consoles has nothing to worry about, as it has been announced by retailer, Amazon and hinted by toy retailer, Smyths that a second batch of the product will be in their stores before Christmas, giving the unlucky customers of the first batch of the product who were not able to get the supposed best Christmas gift of 2016 a second chance to acquire the best retro themed console on the market.