Sabrina Carpenter chats to Northern Lights about pursuing her love for music and supporting The Vamps on their Middle Of The Night tour.

Starting as a small town girl from Pennsylvania, USA, to setting foot on her first European stage, Sabrina Carpenter is the girl you need to have on your playlist.

At the age of six, Carpenter’s passion for music and a desire to perform was inspired by the artists her parents listened to.

Speaking to Northern Lights, she said: “I can remember that from a very young age I was like ‘I want voice lessons, I want to sing, I want to write songs, and some day I want to have an album – I thought that was the coolest thing!”

Using YouTube as a platform to showcase her talent, Carpenter’s determination to sing gave her the opportunity to sign with the American label, Hollywood Records by the time she was 12. She has also had the chance to tour with various artists such as The Vamps, who she’s currently supporting on their ‘Middle Of The Night Tour’ in Europe. 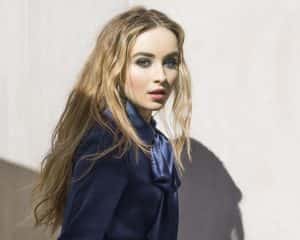 Balancing singing with acting, most will recognise her as Maya Hart in the Disney sitcom, Girl Meets World.

However, she’s now venturing into music projects, released her second studio album EVOLution in 2016, which follows from the first: ‘Eyes Wide Open’ (2014).

Her new album features 10 songs, including the popular hits ‘Thumbs’ and ‘On Purpose’ which have hit a total of 55 million streams on Spotify.

Taking inspiration from all around her, she says: “I wanted to write songs that I would listen to myself. I had so much to say and I didn’t realise that I had to say it all, but through the style of my music and sound I think that’s how I was able to get the different stories across.”

Carpenter has been exploring the acquisition and playing with a collage of music, as you can identify elements of soul, pop, and jazz in her records.

Not only does she have a mature and fiery tone, she also plays the guitar, ukulele, and piano. She mentions that her next target is the drums.

Carpenter brought the crowd to their feet when opening for The Vamps on Monday night at the Metro Radio Arena, after performing five songs and a rendition of ‘That’s What I Like’ by Bruno Mars.

The atmosphere was welcoming and lively as fans sang along to the upbeat ‘Eyes Wide Open’ and even the ones who weren’t familiar with the lyrics hummed and danced along. 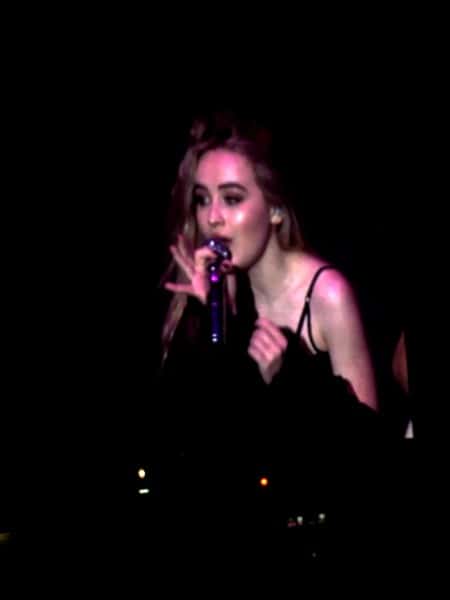 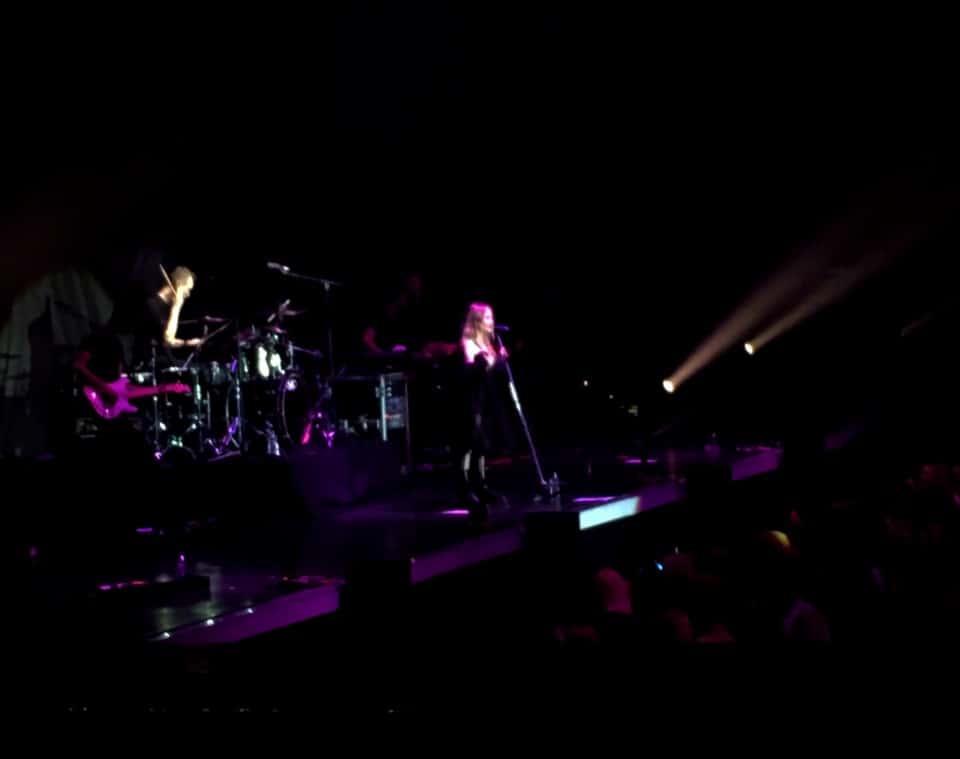 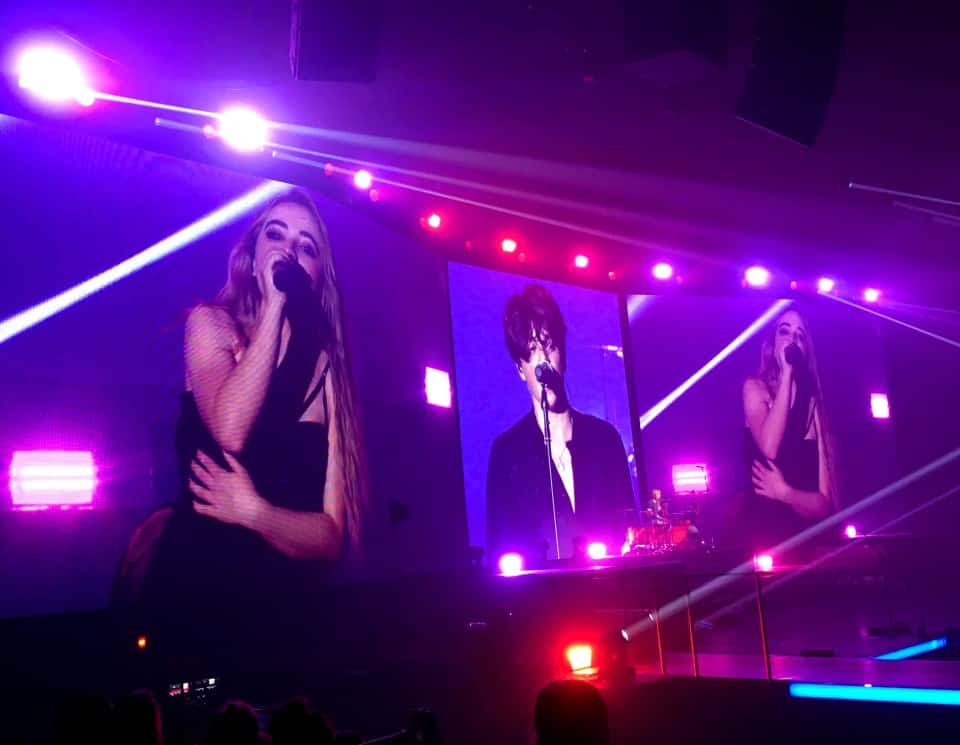 Brad Simpson of The Vamps duets with Sabrina Carpenter 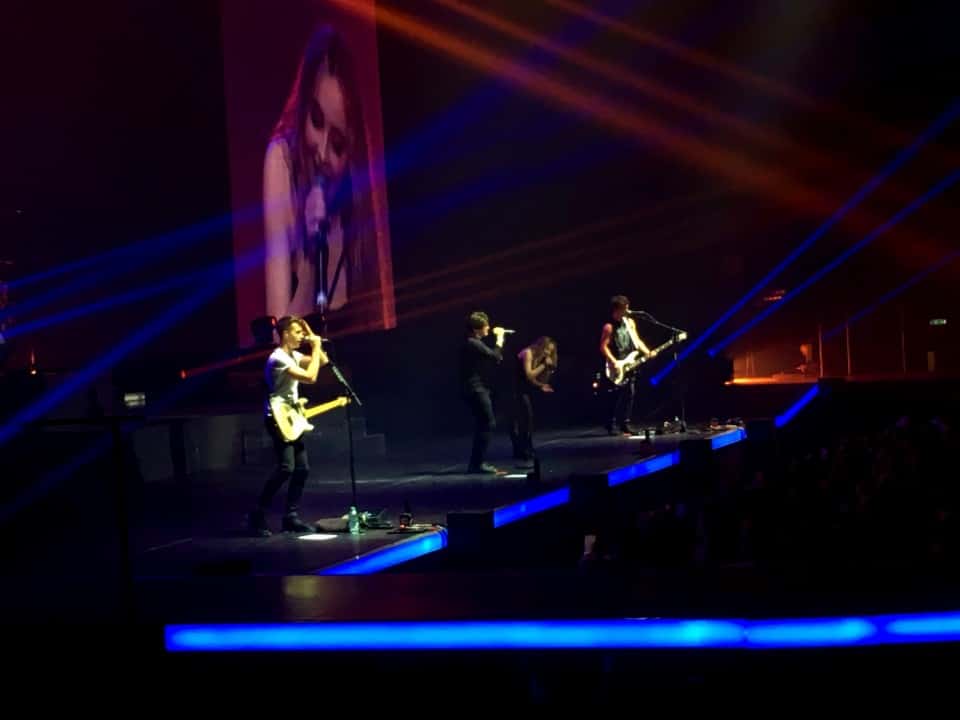 The Vamps performing 'Somebody to You' with Sabrina Carpenter

Impressively, there was no difference between the studio versions of her songs and her performance. At only 17, the young lady sang her heart out, hitting every note to perfection. She was also assisted by her sister who sang backing vocals, and it was warming to see the connection they have on stage.

“Luckily I get to bring my family with me. My sister is in my band, I’ve brought my mum on past tours and my dad is coming to visit – he’s flying out for my birthday so that’ll be very fun,” Carpenter assures, as she makes a joke that: “With technology we get to talk to each other almost whenever we want – if there’s good Wi-Fi.”

Coming into the industry as a child, and often traveling for work, it’s humbling to know that she still maintains a close relationship with her family. Child stars can often derail because of the pressure they face in the business, but Carpenter’s maturity and grace are incredibly respectful through the way she conducts herself and her stage presence.

One of the most enjoyable moments of the night was when The Vamps brought Carpenter out to sing the part of Demi Lovato in their hit song ‘Somebody To You’. The duet with Brad Simpson was lively and got the entire crowd cheering, as the two voices entwined harmoniously.

Carpenter mentioned that Newcastle is the first time she would be performing in Europe and after her performance, it’s fair to say that she’s set the bar high for the rest of her upcoming concerts.