In the last five years, Kpop and Korean culture have gained a lot of popularity in the West. After the success of groups like Exo, BigBang and Psy conquering the online world and achieving millions of views on YouTube, it is now BTS’s turn to claim their spot in the Western music charts.

The Bangtan Boys (BTS) debuted on June 13 2013 with the song ‘No More Love’, with the video reaching more than 33 million views on YouTube.

Ever since, the Korean boy group experienced an incredible rise in their popularity being awarded numerous times all over Asia and the rest of the world. Their fantastic live performances with elaborated and complex choreographies and incredible singing skills are highly appreciated by their fans and in their most recent world tour, ‘2017 BTS Live Trilogy Episode II, The Wings Tour’, BTS sold out venues in places like Chile, Brazil and even Chicago and their most recent hit ‘Not Today’ already reached over 81,322,778 views on YouTube so far.

After the announcement of the group’s nomination for the category of Social Top Artist, a massive number of fans from all over the world have been actively voting for the group making it reach more than 80 million votes so far surpassing artists like Selena Gomez, Ariana Grande, Shawn Mendes and the category winner in the past six years, Justin Bieber. 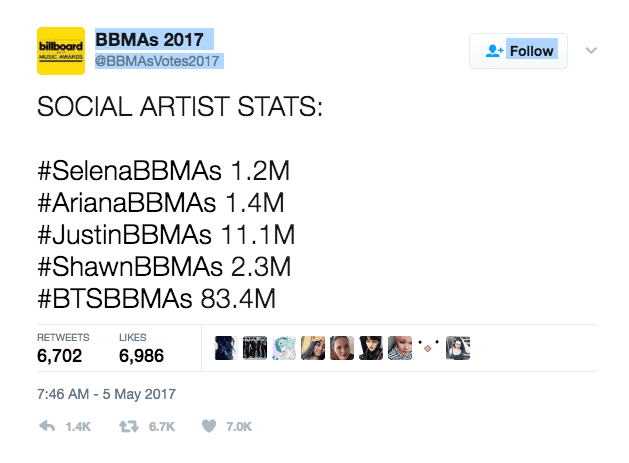