Review: The Terminal Velocity of Snowflakes 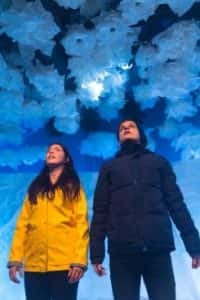 Heather Caroll and Daniel Watson; cast of The Terminal Velocity of Snowflakes

It’s not very often that we see a piece of theatre that relates so deeply to certain phases of our lives — taking the audience on an emotional rollercoaster and a Déjà vu experience. But in The Terminal Velocity of Snowflakes, our hearts melted with Rosie and Charlie who make us smile and cry in their journey of finding each other and discovering their paths in life.

The play, which opened on November 22 at Live Theatre’s Studio, is showing for the second year in a row. It takes viewers on the journey of two young souls, Rosie and Charlie, who meet for the first time as kids in a snowy park and instantly connect. Their chosen paths in life separate them, but their souls stay somehow connected despite the distance — all with the help of snowflakes. Their destinies cross together one more time in their 20s at a bar, after they have both had what could be described as complicated lives, mixed with unhappy relationships. It starts snowing as they talk outside the bar where all the memories rush back to their brains and they reconnect one last time. 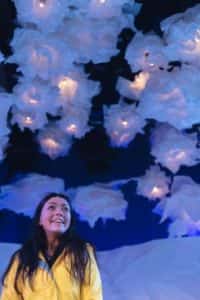 The snowy decorations of the theatre’s studio — along with the white smoke, sharp lighting, and warm music — all set the mood for a dreamy production that sticks in the memory. The two cast members playing Rosie and Charlie — Heather Carroll and Daniel Watson — are no exception to the great work of art the entire production is. Overall the play production is a memorable success from all angles of production and creativity. 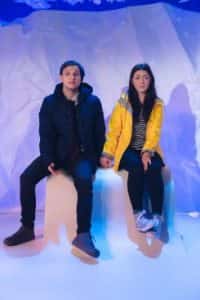