Interview: The team of The Terminal Velocity of Snowflakes 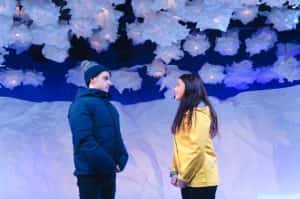 Having watched the play, we were lucky enough to grab a few words with the writer and stars of The Terminal Velocity Of Snowflakes.

We started by talking to Nina Berry, the writer of the play.

NL: Would you tell us a little bit about yourself?

NB: I am Nina, I am 24 and I am a playwright. I first moved to Newcastle when I came to study at Northumbria University — which was seven years ago now. I studied English Literature and Creative Writing. I came across Live Theatre in my first year of University and started to attend the shows regularly and got a job working behind the bar. It may sound a bit cliché but I just fell in Love with Theatre.

I was asked to write a 20 minute piece for the Christmas Variety Night two years ago and that’s where Snowflakes came from. Since then, I was commissioned to develop it into a full length piece; which was my first ever full length play. It opened last year and was on for a week and it has come back this year for a full run.

NL: What was your source of inspiration for this play?

NB: Two years ago, when I first started writing that piece, I just really wanted to write a piece that sort of encapsulated all of the emotions that we as human beings tend to go through at this time of the year, that kind of nostalgia that we feel, and the kind of looking back on our lives and reflecting and looking forward and thinking about what the future has to bring.

And I think relationships are also one of those things that we tend to think about. Whether we are with somebody, or we are not, or we have just broken up with somebody — just love generally, in all different sorts of senses. I started thinking about the journey of these two characters and visiting them at different points within their lives.

NL: What were the highlights of this year’s version of the play?

NB: Firstly, as a writer who is still learning a lot and is very early in her career, it has been wonderful being able to revisit a play, especially because it was the very first full length play that I wrote, and to be able to revisit characters and sort of discover more about them and their journeys.

This time around we got to work with the wonderful media workshop who did the fish walls for the show which are beautiful. I think I have to say, predominantly, it’s been working with the new cast member, Dan — even though it was wonderful working with Heather, who was in last year as well — but it was great working with somebody else who can bring something new to the play.

NL: What are your plans for the future?

NB: I have been commissioned to write a couple of plays for Live Theatre next year. I was involved in a project which was part of the “Bridging the Gap” scheme last year. We have a show which was part theatre, part gig that will be coming back next year and we are going to develop it, hopefully. We’re hoping to do a tour but it’s going to be on Live in the autumn.

I’ve also been commissioned to adapt the wonderful Julia Darling’s novel, The Taxi Driver’s Daughter, for Live Theatre, so that’s hopefully going to be on either next year or the beginning of 2019. I was also involved in a project with the Danish Theatre Company this year which I wrote a first draft for and had a reading here, so I’m hoping to develop that as well at some point in the near future.

NB: What’s the future of The Terminal Velocity of Snowflakes?

NL: I’m not sure at the moment, but I would love to take it elsewhere and do a tour of it. We were chatting with SOHO and trying to negotiate a tour this year, but it didn’t work out. But it would be great to have it showing in London or any other parts of the country. It’s a show that I love working on and I think that a lot of audience appreciate an alternative Christmas show at this time of year so it would great if it did have another life in the future. 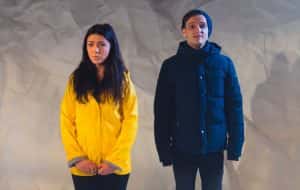 Heather Caroll and Daniel Watson; cast of the play

NL: Tell us a little bit about yourselves and your careers.

HC: I started my career when I went to drama school. Then I got an agent and then just started going for auditions and getting jobs I suppose. I actually did my first job at Live, which was Jonathan Likes This by Lee Matheson. That was even before drama school. I started at a theatre company called Triple House Theatre in Manchester. I did this show last year and then I’ve come back and done this show again, and it’s a rollercoaster but I love it.

DW: From a really young age I couldn’t really think of anything else that I wanted to do. In school, when everybody was playing football or whatever, I was always playing games with my friends and pretending I was doing this and doing that. From there, I joined various drama groups and managed to get a part in Byker Grove on CBBC. I was on that for two years.

After that I attended different drama schools and I studied drama at college. I just recently graduated from Project A, which is a course that is run at the Theatre Royal and [while] there I got to work with theatre professionals. It was through that course that I met Graeme Thompson, the director of this show. He came and he asked me to do this short, ten minute piece that was here at Live. I was lucky enough to get the audition and I managed to make my first full length debut play, which is this play right now.

NL: What was it like being part of this play and how did it connect to you?

HC: It’s so relatable. Whether you’re a teenager or if you’re somebody in your mid-40s. It’s a massive thing now because none of us knows what we’re doing in life. We all just pretend to know what we’re doing. Especially with Rosie, I found it so easy to connect with her because I’ve gone through moments where I didn’t have a clue what was going on in my life and [where] I feel very alone. You feel like everybody else is really happy around you and you’re the only person who isn’t happy and doesn’t know why — like something’s missing. And Rosie is pretty much looking for something but she doesn’t know what it is.

I think a lot of people spend a lot of their lives doing that. It’s a sad thing to think about but also it’s quite reassuring. Nina’s writing makes it so reassuring that everybody feels like that and you can see that through audience’s reactions. The fact that people get so upset or they connect with the characters, it’s really nice to know that it isn’t just you.

DW: It was weird because when I first read the script and read the part of Charlie, I kind of thought “oh my God, I’ve done this, I’ve been in that situation”. I worked in a bar, I wanted to say things to people that I couldn’t, I walked down the streets sometimes thinking what on earth am I going to do with my life, being sad, upset, lonely and all of these things. And when I read this for this character I was just like, wow. I’ve felt it on all different levels of what happens to the character. It didn’t really get to me how magical it would be until we started rehearsing and were on the set. I was just taken back. I feel so grateful and thankful that I’m part of such an amazing team and an amazing show being perfectly written by Nina Berry.

NL: What were the best and most difficult moments of the show?

HC: One of my highlights, I think, is probably the creative team. We had Beth who’s the composer; Graeme, Our director; Nina, the writer; Nick, the lighting designer; everybody was there and they watched it and you could just see everybody’s ideas sparking and they just play into this whole magical show. Sometimes I think, in a weird way, me and Dan have the easiest job, because the set and the music does so much for us.

DW: The difficulties, obviously, for me was entering the project as a new guy when everyone else had been on board and done it before. It kind of felt like I’m stepping into some big shoes here, because Dean Bone who played it last year did a great job. On the very first day I was thinking I’ve got a lot to live up to here. When getting the script — which was like 83 pages long — when we had only four weeks, I went home and I would lock myself away every night for a couple of hours and I read and learned. Thankfully, I was scared because it was the fear that made me think that I’ve got to nail this, and the fun part was just seeing it all come together.

NL: What are your upcoming plans?

HC:  Next year I’m directing a show in Manchester with the Theatre company that I co-run. We do a lot of immersive theatre projects. It’s a really heart-hitting show. I also work at the Crystal Maze in Manchester, so I’ll be doing that other times. With acting, you never really know what you’re going to be doing tomorrow.

DW: Hopefully from this show, I’ve made some good connections and people see the show, so hopefully something will come after this. At the moment I’m enjoying the unknown.