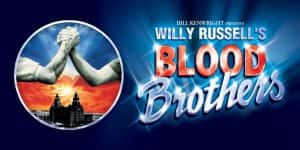 “Have you ever heard the story of the Johnstone twins? As like each other as two new pins, of one womb born on the self same day, how was kept and one given away”

Blood Brothers, written by Willy Russell, is an emotional nail-biting show that will have you sat on the edge of your seat. It’s about love, family, sacrifice and hatred, you won’t be able to take your eyes away from it. 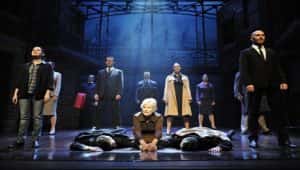 The cast of Blood Brothers.

The show at the Sunderland Empire was amazing and my emotions were everywhere by the end of it. Walking into the theatre really got me excited and I couldn’t wait for the show to start. The actors were phenomenal and were mesmerising to watch and when the show started, I instantly could feel goosebumps up my arms and legs as the music that played set an eerie, creepy atmosphere which really intrigued me.

Some of the actors in this show I had seen previously in Blood Brothers four years ago and you could recognise straight away how much they had developed as performers and actors, it was incredible being able to watch them in the same production again years on and seeing how much it had changed.

The overall atmosphere during the performance was amazing, there was lots of humorous sections in the show too which really helped with the atmosphere and the fact that the audience were laughing and enjoying too made the overall experience so much better.

I would recommend this show to anyone who enjoys not only some giggles but also someone who enjoys emotional rollercoasters and cliffhangers. This is such a phenomenal musical that it shouldn’t be missed, the talent and effort by all the actors and orchestra is amazing, this show was definitely worth the money.