They Shall Not Grow Old: a review 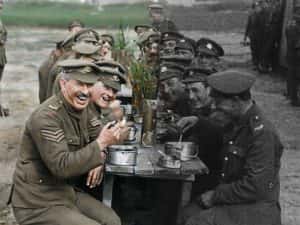 They Shall Not Grow Old is a new First World War documentary, compiling archive footage to create a feature film about those who fought in the war.

Directed by Peter Jackson, the film took 4 years to make (coincidentally, the length of the war) and is a tribute to the soldiers themselves, filmed and told from their perspective. It is all genuine footage, the people in it were real and their own voices tell their own stories.

The footage, filmed by people in the trenches, had to be sped up to meet modern frame rates.  This meant that the computer had to fill in the missing frames, and it has done an excellent job because the new frames are seamless. I didn’t realise (until it was pointed out to me) that they had changed the footage.

The footage was also all filmed in black and white (colour video was not invented until the 1930s), so the footage had to be coloured.

I was very sceptical of this.  Sometimes, the colouring of old photos is not done well and can ruin the footage, but you can tell this has had real time and effort put into it. This colourising makes the people in the film more real, suddenly they are more human instead of a page in a history book or a name on a memorial.

The film also uses some interviews of veterans carried out in the 1960s. Their tales give a personal story to the war and many of them, perhaps surprisingly, spoke of it as a big adventure: they had a fun time in the army and didn’t want to go home.

Many of them were disappointed – even to the point of feeling guilty – that they did not see action.

The attention to detail in the film is also excellent. As there was no sound in the original recordings – but the people were clearly talking – they got speech specialists in to analyse what they were saying. This produces great results, and we get to know what the soldiers were talking about – from conversations about where they come from, to orders from the sergeant.

They also looked at what regiment the people were from and got voice actors in from that area, so if it was the Durham Light infantry they would get someone from the North east to voice them.

The sounds of the weapons and the explosions are all genuine. Again the filmmakers went to great lengths to achieve this, recording the detonation of an explosive that had been found in Flanders fields in modern times. They also had test fires of guns such as the SMLE MKIII, Webley revolver and Lewis Machine Gun.

Despite the talk of it being an adventure, there are scenes that are incredibly sad: when soldiers recall going over the trenches, or when tank crews recall seeing men being cut down by machine guns, it is very moving. There were also some graphic scenes that were really haunting, such as soldiers being left dying and eaten by rats.

I would have liked to have seen something from the German side as their experience in the trenches was much the same.  It would have been great to see their perspective to show the suffering was universal.

All in all, this is a great tribute to the fallen and those who fought in The Great War; their memories are now preserved in a film which lifts them off the pages of the history book and gives them life.

If you can find it online or in the imperial war museum, give it the time it deserves.