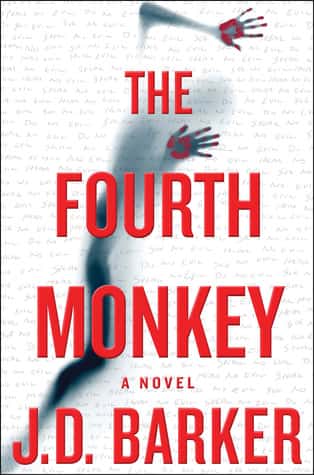 For over five years, the Four Monkey Killer has terrorized the residents of Chicago. When his body is found, the police quickly realize he was on his way to deliver one final message, one which proves he has taken another victim who may still be alive.

As the lead investigator on the 4MK task force, Detective Sam Porter knows, even in death, the killer is far from finished. When he discovers a personal diary in the jacket pocket of the body, Porter finds himself caught up in the mind of a psychopath, unraveling a twisted history in hopes of finding one last girl, all while struggling with personal demons of his own.

With only a handful of clues, the elusive killer’s identity remains a mystery. Time is running out and the Four Monkey Killer taunts from beyond the grave in this masterfully written, fast-paced thriller.

The Fourth Monkey (TFM) is an enticing and mostly gripping read. Detective Sam Porter has deeply sad realities of his own that become known nearer the end of the book. He is plagued by thoughts of the The Four Monkey killer and will stop at nothing to catch him. When Porter discovers Emory Connors has been abducted, he knows he has to find her and that time is running out fast.

For the most part, the narrative is definitely gripping and kept me reading for hours on end. Unfortunately, I’m not the biggest fan of novels where there are more than two POVs; sometimes, TFM jumped between characters too quickly and left me wondering why POVs had switched over at all.

Furthermore, the diary entries became irritating to read as they felt too far-fetched a lot of the time. It was almost as if the novel could have survived without them. There are some highly disturbing entries – as would be expected from a serial killer – so go in mentally prepared for what you’re about to read. It can often be gory and vile.

In fact, my favourite POV was Emory’s, the missing girl, because no details are spared in her attempts to escape. She’s trapped in a tiny room with her dead mother giving her advice throughout her time being locked up. She’s terrified and desperate, which I could actually feel throughout the detailed accounts. I would have liked to have more parts from Emory’s POV because I felt they were very important to maintaining the ‘human’ element of the story.

Whilst the Detectives accounts are interesting, I felt there were times they fell flat. In some ways, I truly felt he didn’t have much of a character as everything was very focused on the case. When his backstory is brought into I began to see a more complex side to his character which I appreciated because he was lacking at certain points.

Be prepared for a lot of swearing and the 4MK’s seriously creepy parents.

I’d rate TFM 3.5/5 as I enjoyed it, but felt there were areas for improvement such as the diary entries and occasionally strange pacing.