Review: I’ll be gone in the Dark by Michelle McNamara 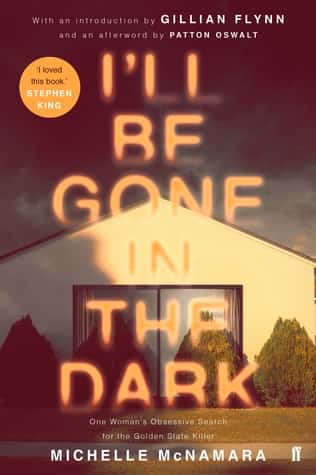 “You’ll be silent forever, and I’ll be gone in the dark.”

For more than ten years, a mysterious and violent predator committed fifty sexual assaults in Northern California before moving south, where he perpetrated ten sadistic murders. Then he disappeared, eluding capture by multiple police forces and some of the best detectives in the area.

Michelle pored over police reports, interviewed victims, and embedded herself in the online communities that were as obsessed with the case as she was.

At the time of the crimes, the Golden State Killer was between the ages of eighteen and thirty, Caucasian, and athletic—capable of vaulting tall fences. He always wore a mask. After choosing a victim—he favored suburban couples—he often entered their home when no one was there, studying family pictures, mastering the layout.

He attacked while they slept, using a flashlight to awaken and blind them. Though they could not recognize him, his victims recalled his voice: a guttural whisper through clenched teeth, abrupt and threatening.

I’ll Be Gone in the Dark—the masterpiece McNamara was writing at the time of her sudden death—offers an atmospheric snapshot of a moment in American history and a chilling account of a criminal mastermind and the wreckage he left behind. It is also a portrait of a woman’s obsession and her unflagging pursuit of the truth.

Framed by an introduction by Gillian Flynn and an afterword by her husband, Patton Oswalt, the book was completed by Michelle’s lead researcher and a close colleague. Utterly original and compelling, it is destined to become a true crime classic—and may at last unmask the Golden State Killer.

I’ll Be Gone In The Dark is a true crime non-fiction novel that will leave your mind reeling and stomach churning.

Since its release, The Golden State Killer has been apprehended and named in the media. Unfortunately, McNamara was not able to see justice served before her untimely and sudden death. The obsession she has with the case seeps into every page of the book. Her investigative skills are superb and provide the reader with insightful accounts into the case.

This novel holds a fascinating narrative and Michelle feels like a friend rather than simply the author. Whilst it felt personal, she didn’t focus on her own thoughts too often which left plenty of room to explore other avenues of the case. Each section is titled with the areas that were terrorised during the serial rapes and murders, beginning with Sacramento in 1976.

For me, however, several parts of the book seemed rushed and didn’t necessarily add much. The two authors took McNamara’s notes and essentially copied and pasted them into the chapter. I appreciate not wishing to tamper with the amazing work she did but still it needed more.

The final chapter, written by McNamara’s husband Patton Oswalt, was one of the most poignant, and heartbreaking things I’ve read. Please, don’t skip it.

I’d rate this a 4/5 and I highly recommend anyone who’s a fan of true crime series or novels to read it.