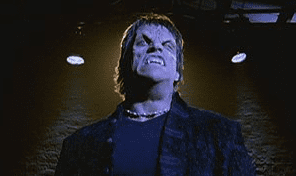 So, did Buffy survive the shocking cliffhanger at the end of last episode? If you thought no, please, stop reading and turn yourself into a local doctor’s, because you’re clearly ill. If you thought yes, however, well done, you guessed the correct – and insanely obvious – outcome.

Buffy obviously escapes the grasp of the vampires and retreats back to the library with Xander and Willow. They, along with Giles, attempt to work out what on earth the vampires want and save Xander’s friend, Jesse. They’re too late however, and Jesse has now been turned into a deadly vampire. Now it’s up to the gang to defeat Jesse and stop the massacre planned at the local nightclub, the Bronze, before it’s too late.

I was hoping that, after the decent introduction to the series that was Welcome To The Hellmouth, that The Harvest would continue with the same quality the last episode had.

I’m sad to say this is not the case. The Harvest is a mediocre episode, one that tries its best to meet the quality of its predecessor, but doesn’t quite make it. It would be unfair to say that the episode is completely without merit, because it does has good moments scattered throughout. But overall, it’s a forgettable affair.

The cast is as good as they were in the episode prior to this (something you’ll see me saying a lot – the cast are so consistent). However, one horrendous stick in the mud here is The Master. I can’t tell if it’s simply the editing or the way Mark Meltcalf plays the character here but he’s simply not threatening. He just seems rather… muted.

A few things stuck out to me upon rewatch. One, quite how bad is Buffy at keeping her secret identity as The Vampire Slayer a secret? She’s been there for one day and already two people know that what she is. Secondly, it’s rather strange how quickly Willow and Xander are willing to believe that vampires exist. Surely you’d explain it away as being something other than a supernatural, purely evil being?

Overall, The Harvest is mediocre, a disappointing resolution to a pretty solid set-up. By no means is it the worst Buffy The Vampire Slayer episode, hell, it’s not even the worst episode this season, but it’s not great.

Best Moment: That shot above, from inside the Bronze during the Harvest. God, it’s so damn good. It’s the first proper display of the acrobatics and flexibility Buffy actually has. Sure, the previous episode featured several moments, but nothing on the scale of this, and nothing quite as flashy as this.

Best Character: It’s a tough one, as most characters in this episode are much more fleshed out than the previous one, but I’m gonna go with Xander here. He’s just way more developed, he steps up to the plate when he’s needed and stakes his former friend, Jesse.

Best Line: “You listen to me! Jesse is Dead! You have to remember that when you see him, you’re not looking at your friend. You’re looking at the thing that killed him.”

Fun Fact: Joss Whedon originally wanted to put Eric Balfour’s name in the credits, so viewers wouldn’t be expecting his character’s death. However, the budget would not stretch to this.