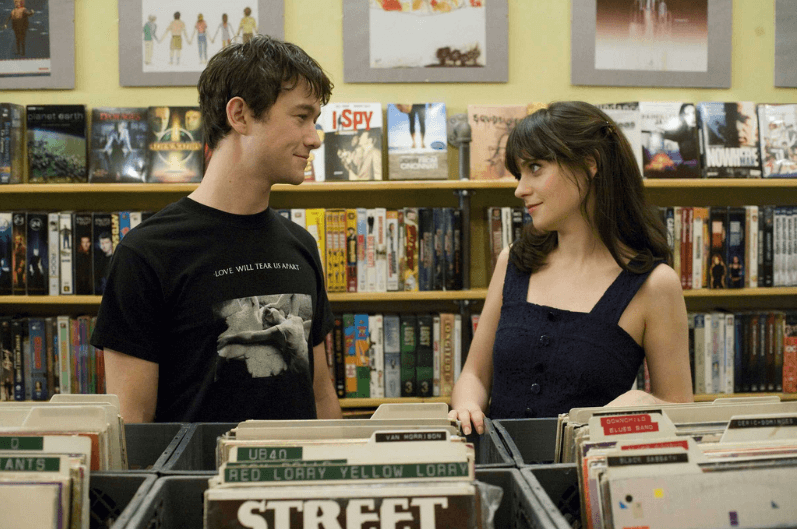 This is not a love story. This is a story about love.

As the opening narration suggests, (500) Days Of Summer is far from your typical Rom-Com. It’s not anywhere near as idealised as other Rom-Coms are, for example. It understands that a lot of stuff will happen in a life that you simply cannot control, that you must deal with, that not everything will always work out in your favour. The world may be your oyster, but it is also your mistress.

(500) Days Of Summer is centered around Tom, played by Joseph Gordon-Levitt, and Summer, played by Zooey Deschanel. It revolves around their romance and what comes after. What is it like to still be friends with a person you would have once called your one and only? For Tom, it turns out, it’s not exactly great.

Plot-wise, (500) Days Of Summer is fairly simple, yet emotionally effective. It will tear your heart out and stomp on it immediately after making you grin like a damned maniac. The Reality VS Expectations segment, in particular, broke me as a man, it’s so damn effective at what it’s trying to do, conveying how things never quite play out as they’re intended. The narrative of the film is presented in a non-linear fashion, and that is absolutely perfect for what the director (Marc Webb) is trying to achieve, showing a sequence of events that all lead up to this one particular moment, this breaking point.

However, it’s not all positives when it comes to this film. While most of the plot is great and quite the adventure to experience, the ending left a very bad taste in my mouth. It’s just not a very good ending, and the implications given by the ending are far from fitting the tone of the film. Chloe Grace Mortez’s performance as Rachel, Tom’s younger sister, also leaves a lot to be desired. It’s a stale, uninspired performance that really feels like she was couldn’t be bothered giving the role her all – as if it was somehow above her as an actress.

The same criticisms do not stretch to the rest of the cast, however, with Deschanel and Gordon-Levitt giving it everything they’ve got as their respective characters. The pair have such chemistry that you begin to believe in this relationship, in the trials and tribulations that it’s going through and you begin to invest in this pairing. Webb achieves what many other filmmakers cannot with this, finding a way to make the viewer emotionally invested in his work. I do quite like this film.

Which makes it all the weirder that Webb also made one of my least favourite films in The Amazing Spider-Man 2. Yet, in his directorial debut no less, Webb made a wonderful piece examining relationships and the long-lasting effects they have upon a person. Perhaps this is why the strongest parts of The Amazing Spider-Man movies was always the dynamic between Gwen Stacy and Peter Parker.

Speaking of Webb, his directing here is pretty good for a directorial debut, with the previously mentioned Reality VS Expectations sequence being a particular highlight. Another highlight that cannot go unmentioned is the dance sequence, which is partly animated, in the style of a Disney film. It’s quite spectacular to view.

Overall, (500) Days Of Summer is a flawed masterpiece, and when it’s taken into account that this was Marc Webb’s directorial debut, quite the achievement. If you’re looking for something fun to watch, look no further than this film.