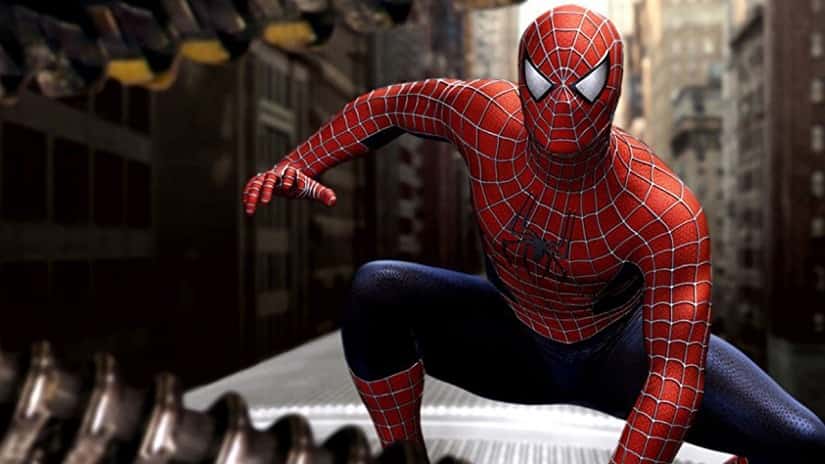 Often cited as one of the superhero genre’s greats, Spider-Man 2 turns fifteen years old this year.

Does anybody else feel old all of a sudden?  Perhaps Raimi’s most well known film that doesn’t have Bruce Campbell in the lead role, I thought it was high time to take a trip back into the past to reappraise this gem, and find out if the film has truly stood the test of time.

Raimi’s Spider-Man trilogy is often cited as a key influence on modern Superhero films as a concept, alongside such works as Richard Donner’s Superman (1978) and Tim Burton’s Batman (1989).

Often, out of the three films spoken about, the one discussed the most is Spider-Man 2 due to how well it understands the concept of Spider-Man as a character. Sure, it doesn’t get everything right (Spider-Man has organic web shooters, unlike in the comics where they’re created through his passion and skill in science), but what it does get right, it does extremely well.

Peter Parker’s struggle between both sides of his identity, the regular, science geek Peter Parker who has a social life and other commitments to maintain, and his alter ego, Spider-Man, who has a duty to do everything in his power to protect the city from regular crime and, occasionally, extraordinary crime. After all, with great power comes great responsibility, and Raimi understands this concept to a tee.

It must have been a surprise to see a director most known for the Evil Dead trilogy come to the superhero genre, to one of the most well-known superheroes of all time in fact, and make it this good.

Spider-Man 2 picks up two years after the original film left off, so a brief recap is in order. Peter Parker was bitten by a radioactive spider and became Spider-Man, but through his own inaction he allowed his uncle to be murdered. This taught Peter how important using his power responsibly is and he became a crime-fighter. At the same time, science mogul Norman Osbourne, father of Peter’s best friend Harry, tested a serum on himself that would supposedly make him stronger. While it did make him stronger, it had the rather unfortunate side effect of turning him into a Dr Jekyll and Mr Hyde allegory.

Spider-Man fought him and defeated him, but the Green Goblin (Osbourne’s Alias) impaled himself on his own glider.

In Spider-Man 2, it is now two years post the death of the Green Goblin. Spider-Man, played once again by Tobey Maguire, must learn how to balance his love life with Mary Jane Watson (Kirsten Dunst) while dealing with the rise of a new evil in Alfred Molina’s Doctor Otto Octavius. It’s your standard Spider-Man story from the comics, but adapted incredibly into live action.

James Franco once again returns as Harry Osbourne, in what is to this date one of his greatest performances, perhaps only behind his portrayal of Tommy Wiseau in The Disaster Artist. Rosemary Harris also returns as, dare I say it, the greatest Aunt May in any Spider-Man film? The implication throughout the film that she knows that Peter is Spider-Man, but isn’t telling him because she believes in what she is doing, is superbly achieved.

The cast is frankly spectacular. Maguire is at his finest in this movie, managing a balanced portrayal of a man teetering over the edge of two extremes, either fully becoming Peter Parker and quitting his role as Spider-Man, or becoming Spider-Man full time.

Alfred Molina is one of my favourite comic book villains, somehow managing to humanize the evil Doctor Octopus in a way that few other superhero films have ever managed. The only other comic book films that comes to mind that have actually managed to do this are The Dark Knight and Avengers: Infinity War, with The Joker and Thanos respectively.

This is, as previously mentioned, easily one of Franco’s best roles (and a rare, non-comedic one). Harry Osbourne is an extremely nuanced character, a perfect foil, really, to Maguire’s Spider-Man.

The only real issue with the cast that I have is Kirsten Dunst’s pathetic portrayal of Mary Jane Watson. While the writing certainly doesn’t do her any favours, Dunst’s portrayal is lacking of emotion and anything that might make the audience even slightly like her character. The Amazing Spider-Man films did a better job with the love interest and as we well know, both of those films are pretty bad. Oh yeah, and Bruce Goddamn Campbell is also in this film.

Firstly, he managed to adapt one of the most famous comic book moments of all time: issue #51 of Amazing Spider-Man, ‘Spider-Man No More!’, into a spectacular shot. The scene of Spider-Man perched on the train is also great, and God, Raimi’s superb direction, combined with Danny Elfman’s score, is hypnotically brilliant. Elfman’s Spider-Man theme is iconic for a good reason, and it still holds up today.

An orchestral piece, it’s not what you’d usually expect for a character like Spider-Man, but somehow, somehow, it works incredibly well.

So, that’s Spider-Man 2. Well, almost. There’s one more thing to discuss, and if you’ve seen Spider-Man 2, you’ll know what I’m talking about. It’s time to discuss the train scene.

There’s nothing more heroic than saving a train full of people, with no regard for your own safety and your secret identity. But, what really makes this scene so amazing isn’t Spider-Man stopping the train, although that’s amazing too – It’s what comes afterwards, the fall.

The cacophony of hands that reach out to catch him, the civilians that see he is merely a child, no older than 19, and still respect him for what he does for the city; the child that gives Parker his mask back and promises to never tell anybody who he is; it all comes together to make an amazing scene, an amazing moment that is rightfully known as one of the greatest moments in cinema.

So sit back, grab yourself some popcorn and rewatch Spider-Man 2 in its 15th anniversary year. Take in how well it grasps its titular hero and how amazing of a director Raimi is. I think you’ll find it as brilliant as it was fifteen years ago.