The Road To Endgame – Part 5: Captain America: The First Avenger 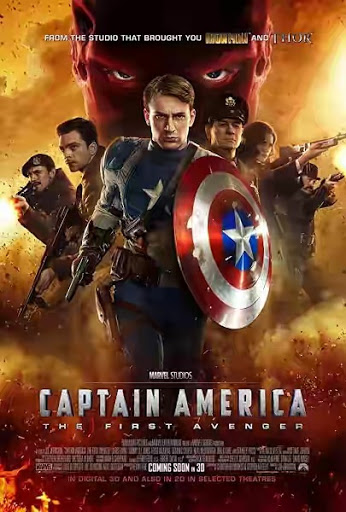 And here we are, five films into the Marvel Cinematic Universe. We have our first MCU film that feels very different to everything that came before.

With Captain America: The First Avenger, we have a War film, set during World War 2. It’s a prequel to everything in the MCU so far, and thanks to this it feels massively different. It’s not just a action film like the previous five films. It’s a fully blown war film about a squad of soldiers fighting to save their home and country from the Nazis. And on those merits alone, I was utterly sold on the concept of this film. Well, that and the prospect of seeing Captain America and Red Skull duke it out in live action.

Word of warning, unlike the previous reviews there’s full spoilers ahead for Captain America: The First Avenger, since you need them in order to be able to contextualise what comes next.

And do you know what? I wasn’t disappointed. Sure, Captain America: The First Avenger could have been better. Sure, the villain could have been fleshed out a bit more. Sure, some of the supporting cast is forgettable. But I love this film regardless. It’s not a perfect film by a long stretch, as we’ll get into, but I still think this is the strongest solo film of the Marvel Cinematic Universe’s Phase One.

Captain America: The First Avenger is about Steve Rogers, a timid young man from Queens who is looking to become a soldier in the war. The issue is, he’s so timid they won’t actually take him, so he undertakes a super soldier test to become the one and only Captain America. He then enlists in the army, becomes close friends with one Bucky Barnes, falls in love with Peggy Carter and sees the horrors of the war first hand. He must stop the villain, Red Skull, from managing to harness the powers of the Tesseract (You’ll see more on this particular item later, it’s pretty damn important). He defeats Red Skull, but at the cost of his freedom, as he is frozen in the sea, not to be unearthed until seventy years later.

So that’s your plot synopsis for Captain America: The First Avenger. If you’re feeling overwhelmed, don’t worry, the film handles it infinitely better than I could ever hope to. The real star of this film isn’t the plot anyway, it’s the cast. In the same way that the first Iron Man solidified Robert Downey Jnr as the definitive Iron Man, this film solidifies Chris Evans as the definitive Captain America. He captures the essence, the nobility of Steve Rogers so well it’s almost easy to forget you’re watching an actor, rather than the actual man.

The rest of the cast is pretty top-notch. Hugo Weaving is great as Red Skull, although he does often feel underutilised by the film. Hayley Atwell is just perfect as Peggy Carter, her screen presence alone often managing to carry her scenes. Finally, Sebastian Stan, possibly the sexiest man alive, plays Bucky Barnes and his performance manages to make me believe so much in Captain America and Bucky’s friendship that when the inevitable happens it’s completely devastating.

Overall, Captain America: The First Avenger is a fun, although occasionally flawed film. The action occasionally falls a bit flat and some of the supporting cast leaves something to be desired, but it’s not enough to majorly detract from this film.

Don’t skip this one in your pre-Endgame Marvel Cinematic Universe rewatch.