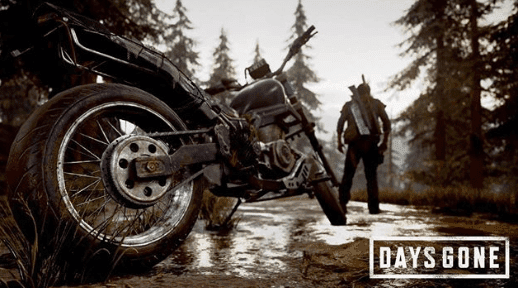 Days Gone is the new and upcoming open-world, PlayStation exclusive, zombie apocalypse game, the type that only a handful of creators have been able to successfully make up until now.

The zombie genre has seriously grown over the years, possibly due to the introduction to the popular hit AMC zombie-drama, The Walking Dead, in 2010. Since then game developers have jumped on this train with majority of these games being only very linear (A to B type games) with the likes of; Left for Dead and The Last of Us.

Only a few creators have been able to successfully create an open world zombie game like Day-Z, Dying Light or Red Dead Redemption: Undead Nightmare. Days Gone looks set to join these as a truly successful zombie apocalyptic game.

You are the Daryl Dixon of Days Gone, putting your feet in the shoes of Deacon St. John.

From the looks of things, you are a bounty hunter working for a series of communities, all the while looking for clues for your missing wife, Sarah, who was evacuated with an unknown group – potentially Government scientists working on a cure.

The game shows the harsh reality that would come with an apocalypse of this scale: people torturing others for information – or for the fun of it, depending on their mental state.

The story looks to be driven by Deacon’s determination to find his wife, as a character at the end of the trailer says:

“I hope you’re right about your old lady, Deac.”

This to me, hints that the story will start of with the prologue of Deacon sending Sarah away to potential safety and the remainder of the story will be trying to find her.

From the gameplay shown in a series of demos, the game looks absolutely beautiful. That also brings a question though: will it be as good graphically on the standard PlayStation 4 (PS4)? The chances are, for the developers to get the best images for their gameplay demos, they will most likely be using the PS4 Pro as it’s better, due to it’s 4K capability.

The game looks to have taken different aspects that worked well with other games and interpreted it into theirs, such as assaulting enemy camps. The one thing I love is that it seems to give you the option for which way you prefer: kill everyone stealthily, one by one, and go unnoticed or wage a five minute solo war, all guns blazing, to overthrow a camp.

It’s not only the Human AIs that allow the dynamic gameplay, using your environment will also give you an advantage over the “freakers”. As shown in a early demo back in 2016, Deacon can use a series of objects in his surroundings, such as shutters to temporarily stop a charging horde, to give him brief respite during the intense life or death situation. There also look to be plenty of other ways that you can slow down the zombies within the game and other interesting things to use to your advantage.

Customisation looks also to be a feature, from crafting small gadgets to killing large or small hordes in ‘nests’ as well as creating a better zombie-killing weapon. I already know what will be my first creation in this game: a Days Gone version of Lucille (Negan’s Bat from The Walking Dead)

Overall Days Gone looks to be a fantastic horror game. However, other games in the past have been really hyped up to look really good in the past, only to receive a poor reception on launch. I really do hope this game lives up to its current hype.

Still wondering what your in for if you buy this game? Here is a recent 95 minute gameplay demo of the game to tide you over until its release on April 26, 2019.