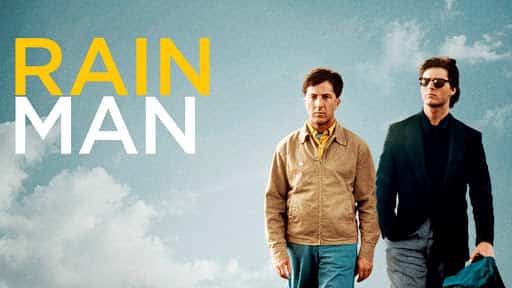 1988’s Rain Man is a comedy but has a serious subject matter at its heart.

Charlie Babbitt is a young entrepreneur buying and selling cars when he gets a letter informing him that his dad has passed and left a considerable amount of money to an unknown beneficiary, the only clue is a mental institute.

Charlie investigates and meets his older brother Raymond, whom he was unaware of.  Raymond has a severe form of autism known as Savant syndrome, which is very rare and those who have it have extremely good ability with numbers, memory, and musical talent, however struggle to express feeling and emotion (but can easily get distressed). Charlie takes Raymond out of the institute and uses him as a bargaining chip to get some of the estate he thinks he is owed.

When this fails he takes Raymond back to Los Angeles but when Raymond refuses to fly they take a road trip across America where Charlie uses Raymond to his advantage. They make a stop in Las Vegas where Raymond’s ability with numbers comes into play when he counts cards and wins big money.

However, Charlie starts to see Raymond in a different light, and starts treating him better as he gets to know him more. Charlie finds out that the imaginary friend he used to have when he was young, called Rain Man, was actually Raymond.  He learns that he was sent away to a mental institute after trying to bath Charlie in hot water.  Dealing with Raymond was a lot harder than he expected Raymond gets distressed a lot when he is put under pressure or when he thinks about a bad memory.  He gets triggered by certain things such as the hot water when Charlie tries to run a bath, and loud noises and big crowds.

The ending is one I find sad, it was quite an upbeat film, however Charlie realises that he is incapable of looking after Raymond who really needs care from specialists, and so he is sent back to the intuition. Charlie promises to see Raymond again in 2 weeks and so Raymond counts down in days, minutes and seconds until they meet again.

The film handles autism very well. I find that some films that try and include autism use it as an excuse to give a character unnatural ‘superpowers’, such as the new Predator film where the boy knew how to use alien technology because of his autism.  To me this is just absurd.

However, Rain Man is a film about autism and handles the topic very well.  Yes, Raymond could be perceived to have super powers with his mathematical abilities but the film is not really about that. It is only one aspect of his character and is not played for comedy or for plot advancement.  Dustin Hoffman puts in an excellent performance as Raymond, giving every scene his all and making audiences really feel for his character.  He deservedly won the Best Actor Oscar for the role.

Tom Cruise also puts in a good performance: you hate his character at first, you get angry at how he treats his brother, but he handles the story arc well and you feel for the guy by the end when he says goodbye to his brother.

The music by Hans Zimmer is excellent. It has a Native American vibe to it which is linked to the title Rain Man as the Natives have an art of Rain making. It also has a very 80s sound to it though, rather than it dating the film badly, it works in its favour.  The shots of the road trip with the soundtrack playing are some of the best in the film.

This is one film you need to see, it has some powerful scenes in it that can make anyone feel pretty emotional. The acting is superb, the score is excellent, the direction and editing is great. If you have not seen this film you need to.