Someone deep in the depths of the balcony replies to a request for a household object with ‘a toaster’. The scene begins. A man named Graham removes some toast from a toaster and asks his wife why it looks so strange. It’s because of her new hobby, she explains. She’s taken to re-creating people’s faces by burning them into pieces of toast. That piece is supposed to be him. She then asks him if he’s impressed by the 3D effect. He is. He reaches into the toaster and pulls out another piece of toast. He asks who this one is supposed to be. Before she can reply, another man enters the scene. Graham enquires as to who this new fellow is. “Graham”, his wife replies. The new man clarifies that he is also called Graham. There is a short pause as they absorb this new information. 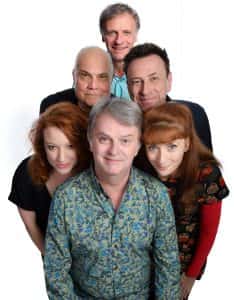 Graham’s wife explains that they are having an affair and that she has a thing for men named Graham. Then, somewhat randomly, she says the phrase “Graham’s Crackers”. There is another pause. She attempts to explain that Graham’s are a brand of crackers. Both men bemusedly remark that they’ve never heard of Graham’s Crackers. There is a knock at the door. The wife answers. It’s a delivery of Graham’s Crackers. She collects them and returns to the two Grahams. Graham asks who is on the final piece of toast in the toaster. Before anyone can respond, a third man arrives in the scene from upstairs. He asks if he can have the final toasted product, which he reveals to be a double croissant with his face on it. He is also named Graham. Graham gobbles his own face as everyone else watches on.

This was just one of the improvised scenes performed by Paul Merton and his impro chums, which sent the Tyneside Theatre audience into fits of raucous laughter. That’s Paul Merton of Have I Got News For You fame, though in this show, Merton shows humour more in line with his work on Radio 4’s Just a Minute. Indeed, in his opening to the show, Merton stated that the group would take any audience suggestions outside of two forbidden topics; Brexit and Donald Trump. To many, this might have seemed strange for a show headlined by someone known for his long-standing presence on one of the UK’s premier satirical panel shows, however, I found it completely understandable. As did the rest of the audience, who responded with a mixture of cheering and laughter. Merton was joined by a great supporting cast of Richard Vranch and Mike McShane, both of whom were involved in the UK version of the improvised comedy show Whose Line is it Anyway?, Suki Webster and Lee Simpson.

All of these performers, not all of whom I was familiar with going into the show, were on fine form. As were the audience, whose inventive and amusing suggestions, yelled from row Z with considerable vigour, helped the performers to craft a unique and hilarious show in which it was impossible to tell what would happen next. A few standouts include the request for the name of an occupation where two people could meet for the first time being immediately greeted with the response of ‘a mortuary’. Another slightly more brutal example came when American comedian Mike McShane asked the crowd for a starting position for a scene, specifying only that it had to be one a man shaped like a space hopper could do. He had barely finished speaking when the suggestion of ‘a space hopper’ was bellowed back at him. McShane then proceeded to turn a remarkably accurate impression of a space hopper seamlessly into pole dancing once the scene began. The zenith of the impro chums’ interaction with the audience came when they asked for a number of suggestions, which they combined into the incredibly contrived scenario of polishing the pope’s shoes with a bubble from a jacuzzi on a repaired palette in Albania. They proceeded to have Merton, who had been wearing headphones while the suggestions were made, guess what had been said by giving him clues through different scenes they acted out. After about fifteen minutes, remarkably, he got it.

Another standout scene involved Merton translating for Simpson, who was playing someone speaking a foreign language. The pair did an amazing job during this improvisation, turning the rather mundane suggestion of archery into a nuanced story whereby the foreign man had attempted to get a cow to compete in an archery contest on his behalf, only to discover that it was a bull, marry it and then have it cheat on him with his own mother. Many improv shows live and die on how interesting and wacky their audience suggestions are, given that the audience are essentially providing the performers with their material on the fly, however, this scene provided proof if any was needed that these performers were massively talented enough to have made an engaging show out of mundane one-word suggestions, had this been necessary.

The show closed with a scene for which the performers had asked the crowd to put a local twist on a Shakespearean play, giving the previous example of ‘The taming of the Shrewsbury’ from one of their previous tour dates. Thus, ‘The two housewives of Whitley Bay’ was born and served as a fittingly hilarious end to the evening.

I would thoroughly recommend Paul Merton’s impro chums to anyone looking for a show that’ll provide you with a huge bucket of laughs and will even allow you to contribute to it. You could even practice coming up with some wacky suggestions before you go, if you fancy being one of those who keep the performers on their toes all evening.