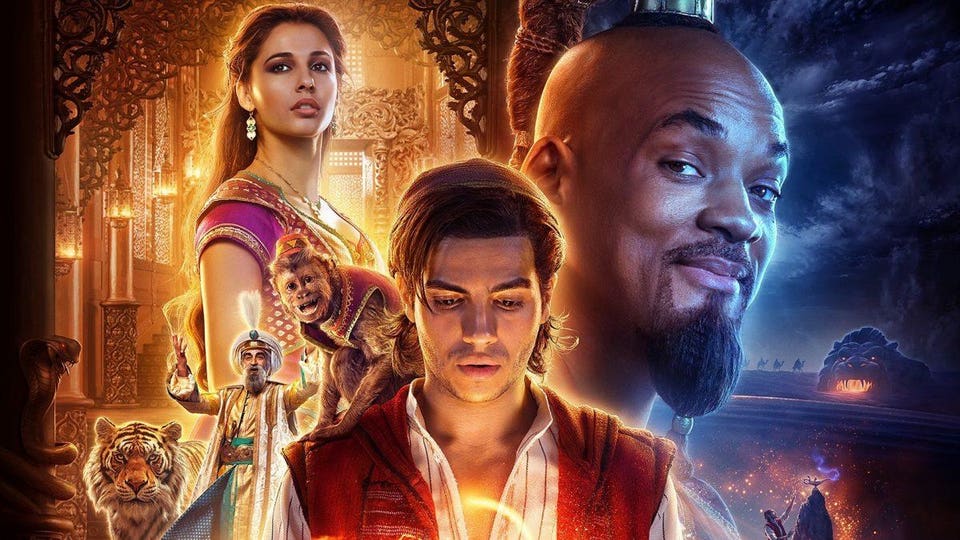 Disney’s live action remakes bode well with day one fans of its animations, but awfully with critics. Live action remakes are a growing trend in the film industry, with audiences getting to experience ‘real life’ versions of Beauty and the Beast, The Jungle Book and now Aladdin. Disney isn’t leaving these remakes alone either, with  it’s highly anticipated release of The Lion King this July, set to continue the trend of taking classic animations in exchange for churning out these musically choreographed stinkers.

Aladdin does warrant limited merit, which is strange as this comes from Will Smith’s performance as the Genie. He doesn’t do anything fresh with the role, and the contemporary impressions of celebrities in that of the Robin Williams performance are nowhere to be seen. Smith feels restrained next to that of Williams’ stellar output as the Genie. But it was Williams that made the character a classic, and it feels unfair to compare the two. Smith does have some glimmering moments throughout that will resonate well with most audiences. His comedic timing in the second act does a hell of a job, and under the free-flowing direction of Guy Ritchie, Smith’s rendition of the Genie is salvageable.

The same, unfortunately, cannot be said for the rest of the cast in this movie. Mena Massoud’s leading role as Aladdin has all the tropes of the stereotypical Disney prince, but has all the depth of a paddling pool. Massoud has a fair voice and knocks one or two songs out of the park, but his overall performance is scenery chewing shlock that will either bore or infuriate. Alongside a bland Naomi Scott, a boring Marwan Kenzari and an unrecognisably poor Alan Tudyk, the cast falls apart rather quickly.

Ritchie’s direction allows for some appealing visuals, but its strict retelling of the original story wears thin by its second act. Instead of going for some unique twist or change up of dialogue, the film merely plods along the same path the original Aladdin film followed. Key quotes, scenes and musical numbers are easy to spot from a mile away, and it takes away from the charm of the movie when these cues are identified ten minutes before they happen.

The musical numbers are somewhat engaging on a visual level. The two most impressive numbers were all featuring Will Smith. I’m surprised the movie didn’t throw in a Fresh Prince of Ababwa joke in there, and I’m truly thankful they skipped the opportunity to do so. Instead they throw as many CGI pieces at the wall and hope for the best. Their best, in my opinion, is sadly not worth viewing.

The main question Aladdin raised for me was: who are these movies for? Those wanting their fix of classic Disney have the animation readily available to them, and for those that are new to the world of Disney, such as myself, would surely prefer the classically animated Robin Williams movie. Either way, the continuation of these live action Disney messes proves to be box office dynamite, but critical duds. Visually impressive, but nothing further than the shallow flashes of ingenuity and adaptation of the much superior source material. If anything, Aladdin will make you long for a rewatch of the classic animations.