More than likely more well known for being lead singer Matthew ‘Murph’ Murphy from The Wombats, Love Fame Tragedy is his side-solo project and the intimate Newcastle venue was the first stop as he travels the UK throughout February and March ahead of an album release later this year.

The night was opened by MiG 15, a relatively new four-piece from Liverpool who also seemingly have ties with Murph and The Wombats, and they played a mix of electro-indie catchy songs that proved the perfect opening act.

With the band only releasing songs from their EP’s since last year, they’re certainly an act to watch in 2020 and beyond. 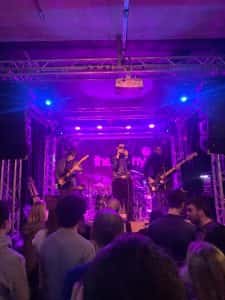 Next up was Full Colour who, after some Instagram digging, have appeared after a name change from the band Gauranga.

Little is still known about these guys, with only one song so far released on Spotify, and they played a set of uplifting guitar backed songs that were good to listen to but not exceptional. I’d say they’re not one of the bands you’d remember where you were the first time you heard them perform.

LFT then took to the stage, opening with one of the songs from his debut EP –  Backflip, that got the crowd going from the off quickly followed by another already released song, Hardcore, that continued the lively and enthusiastic start to the set.

The fast-paced Riding a Wave, with a chorus chorus I think could quite easily work at an outdoor festival very well, came next that got the room singing before Murph introduced a previously un-heard song to the crowd titled 5150.

This was then followed by a mix of familiar and unfamiliar songs, including Brand New Brain, B-Team and Everything Affects Me Now.

Throughout each twist and turn of the songs being played, you get the feeling every song he writes he’s getting his feelings out on paper and singing how he feels mentally.

Pills was the perfect example of what I’m getting at, where every word he sang you actually thought he meant, and it was a very personal performance.

As an encore, or as he said “we’ll pretend this is my last song but we all know it isn’t” beforehand, he finished the night off with the short acoustic new-release Please Don’t Murder Me and his most well known song so far, My Cheating Heart.

Overall it was great night at a fantastic smaller venue. I got the feeling a lot of the crowd at the front were expecting some Wombats songs which sadly for them wasn’t the case, but as a solo act, Love Fame Tragedy is a very uplifting and enjoyable artist who I’d happily pay to watch again.