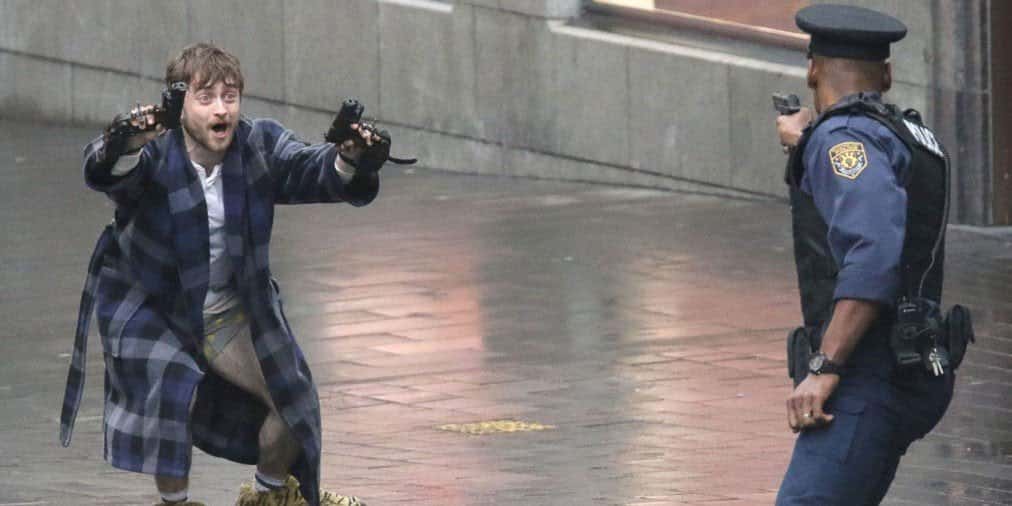 Long anticipated by a great deal of those who are fans of action packed, riotous affairs, Guns Akimbo has finally come into the public limelight after years of what I would assume have been absolute development hell. I’d been excited for the film upon its initial announcement, something about Harry Potter running around in his dressing gown with guns nailed into his hands does have some vast appeal to it. On top of that, I’ve surely spoken of how much of a sucker I am for some braindead action-oriented films, so Guns Akimbo just needed to accomplish the absolute bare minimum to become a thoroughly enjoyable action film.

Unfortunately then, it’ll be no surprise that Guns Akimbo falls at the first hurdle. Daniel Radcliffe stars as our unsavoury loser who has all the personality traits of the exact person this film looks to cater too. He sits in his pyjamas, watching what I assume is a knock-off of the Twitch streaming service, drinking heavily and crying over lost lovers from years gone by. Aside from depicting an almost terrifying level of connection with my life, Radcliffe’s performance isn’t the greatest he’s ever given. I’ll always appreciate that he’s trying to move himself away from Harry Potter, and how much further away could you go with a project like Guns Akimbo? It just doesn’t feel right though, a disconnect between his capabilities as an actor and the script provided to him, which is frankly rushed and horrible.

Most of the issues that come from the film can be pointed at director Jason Lei Howden, who presents us with a clumsy mess of camerawork that tries to hard to be Hardcore Henry blended with a sloppy presentation of fast paced action of the ill forgotten Clive Owen film, Shoot ‘em Up. It’s not a blend that comes anywhere close to enjoyable, with the camerawork nauseating it’s hard to keep up or even care for the action that’s presented to us on screen. Even in the downtime we have between explosively dull set pieces, we’re left dangling around with a threadbare plot that looks to detail a setlist of mediocre characters, plot holes and randomly cliché moments. Not a single piece of the film feels original or engaging in the slightest.

That’s a shame as well though, especially for someone like me who was really looking forward to sitting down and watching a bit of braindead action on display. Guns Akimbo simply can’t muster the energy to be anything close to competent. Radcliffe is the standout cast member, but even he struggles under the weight of both carrying the movie and having to deal with a difficult script that feels dated and bland. There’s no real saving grace throughout, aside from the fact that Daniel Radcliffe spends the majority of his time in an ill-fitting dressing gown getting shot at by Borderlands style villains. Maybe if the camera could stay still for a moment, it would’ve been an enjoyable time.