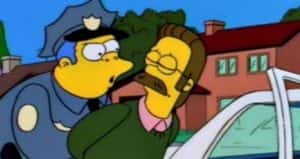 Ned Flanders and Chief Wiggum are two of the best characters on the Simpsons!

With the Simpsons set to hit our screens again later this month, Northern Lights has picked out five characters outside of the traditional family that we love the most.

The show began in the 1980s and is entering its 32nd season, making it one of the longest running TV series of all time.

Over 3,600 characters have appeared in the show, and we are going to whittle them down to a top five!

Everyone’s favourite bartender! Moe Syzlack has been a mainstay in the Simpsons since day one.

The miserable character has a lovable quality, even if he does run a rather shady bar in Springfield.

Our best Moe-ment came in Season 11 during the episode “Pygmoelian”, where Moe was gifted stunning good looks before starting his own movie career.

The episode ended with a large section of scenery hitting him in the face, which destroyed his good lucks returning him to his traditional less-than desirable face.

Here is a compilation of the best Moe-ments!

The world’s worst policeman – Chief Wiggum is a personal favourite of Northern Lights.

Yes, it is probably fair to say that Springfield would be a better place with a more competent chief of police, but Wiggum makes up for it with his passion.

Wiggum is also the father of Ralph, the troubled child who has probably eaten one too many crayons for our liking.

So the Wiggum’s are a great family, but Clancy is a character that always lights up our TV screen.

With sidekicks like Legs, Louie and Johnny Tightlips, Fat Tony is one of Springfield’s friendly villians.

Tony was killed in season 22 and was replaced by his cousin ‘Thin Tony’, a fitting way to end one of the most popular character’s run on the show.

Our favourite Fat Tony moment comes when he has Bart as his bartender and he plays dumb to one of his illegal activities! Classic Tony!

Principal Skinner is probably a surprise pick to be our number 2 character, but we have him this high because he provided arguably the best scene in Simpsons history.

As the principal of Springfield Elementary School, Skinner is the arch nemesis of Bart Simpson and the two duel throughout the entire series.

He features regularly throughout the show and is often seen reminiscing about Vietnam or with his girlfriend Edna Krapappel.

Here is the scene we mentioned before, an absolute classic for Simpsons fans!

A man made of pure gold, Ned couldn’t hurt a fly and we just love his innocence.

Homer Simpson makes it his life mission to annoy Ned, but he just knocks it away with a smile.

His flowery speech, adding ‘Erino’ to the end of words, makes him a classic character so recognisable to anyone who has ever watched the show.

Our favourite moments? Well, I think only a compilation will do!