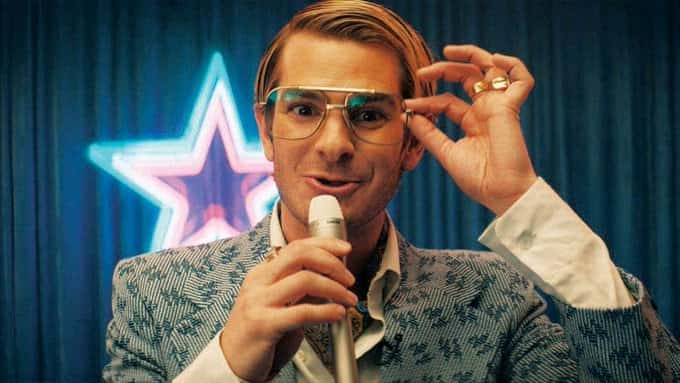 Opening itself immediately with a crass explosion of silent era dialogue, modern-day romance, clusters of nonsense pop, and Dutch camera angles, the new Andrew Garfield project, Mainstream is already off to a shaky start. Instantaneously throwing just about everything at the audience and seeing what sticks. It’s an interesting method, but a film about throwing away the shackles of your phones can only get you so far, and when the mockery of the main characters actually begins to be sucked into and believe the very thing they stood against, you can begin to predict more or less everything director Gia Coppola wishes to showcase.

Garfield’s performance is rather enjoyable. He plays a seemingly erratic, optimistic character, but it soon takes those predictable twists and turns that all modern romances take. It’s exactly what you’d expect though. Why our protagonist Frankie (Maya Hawke) is pointing her camera in the face of Link (Garfield) for most of their time together, is beyond me. It feels like Coppola is trying to make a point about living in the moment, but the moment these characters find themselves in are rather boring. Link’s larger than life mentality, his strive to live without a care in the world soon morphs into tricking the world’s biggest babysitter, YouTube. Shooting a faux millionaire living life the way he wants to, Link and Frankie craft a strange work of art, but there’s no rhyme or reasoning behind it all apart from weak build-up.

Some scenes fall flat thanks to some rather underwhelming writing, clunky editing choices that feel outdated from time to time, and its need for subversion. Coppola spends so much time trying to subvert the obvious that she forgets to implement any of her own style or original flair. Her commentary on the obvious tropes and lack of taste people have for art doesn’t push any boundaries or offer any solutions, and it’s rather odd that every other line tries to hammer home an important, but poorly constructed message. Predictable dialogue, often musing on the idea that artists strive not just for critical and public reception, but commercial respect also. That’s not a new idea, nor is it explored very well here, but the fumbled message within Mainstream comes from the heart, even if it is a rather stony one at that.

Mainstream tries painstakingly to appeal to independent audiences, but it’s hard to take the message seriously when you have a dip-dyed Garfield screaming about demons and then dancing to whatever underwhelming song the film can slap onto the soundtrack. It’s a solid enough film, one that will provide a strange distraction, with Garfield and Hawke’s chemistry aiding the film to greater highs than should be expected. But the direction, editing and script require some serious tweaking for it to be even half as engaging as it believes itself to be. Mired by its own story, the no-one special angle, and the fumbled message overall, Mainstream is a bit grating, but certainly watchable, if a bit forgettable.