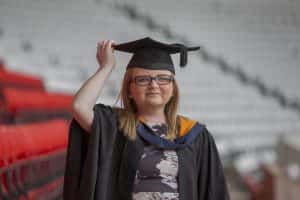 Triple transplant survivor Linzi Saunders has achieved yet another incredible milestone in her life.

Having already completed her Fine Art degree at the University of Sunderland, Linzi has just completed the final project towards her Masters in Fine Art degree. Her work is being exhibited as part of the annual MA Degree Shows, which highlights the array of creative talent from our art and design students.

Reflecting on her own life and the people she has shared those experiences with, particularly those in the NHS, her project is based on inspiration from photographs.

“I recreate images using line drawings before projecting it onto canvas. Acrylic paint helps me to capture the personality of the figure and their expression.

“I always consider colours carefully before painting; it is important to create a likeness of the figures I paint.” 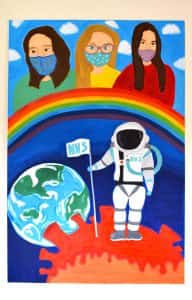 Linzi likes to create art about the NHS

“I was shielding because I am a vulnerable adult,” she explained.

“I left the university to shield before lockdown as I knew it would be extremely dangerous for me due to being a multiple transplant patient.

I brought everything home the same day and my bedroom became my art studio for the next six months. I was lucky my parents decided to shield with me, so I wasn’t always stuck in my room. I had the rest of the house to keep myself entertained.

“I really enjoyed working in the garden as I found the surrounding quite a relaxing place to paint.”

Asked why she chose to study a Master’s degree, Linzi, from Sunderland, says: “From being very young I have been creative in everything I do. It was a distraction from being unwell as a child.

“My fascination grew when I went to college, I studied art and graphic design and shortly after a HND in Fine art where I finished my degree year at Sunderland. I’m extremely passionate about art, it doesn’t feel like work it feels like a hobby. I enjoy it so much that I would like to go into teaching in the future which is why I decided to study the Masters.”

Linzi was diagnosed with two different complex types of leukemia, shortly after she was born.

Medics in Newcastle decided to try new research medication, with Linzi becoming the first patient to undergo the type of treatment.

It was then decided that a bone marrow transplant would be needed and Linzi’s family were tested to see if they would be possible donors.

Her brother, James, proved a perfect match but, despite a successful transplant, the new treatment Linzi was receiving began affecting her heart and she went on to develop cardiomyopathy by the age of eight. 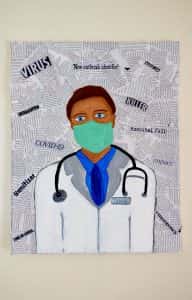 Another one of Linzi’s pieces

It was a condition doctors could not ignore and while still a pupil at Ryhope Junior School in Sunderland, Linzi was told she would need a new heart.

Five weeks after she was put on the NHS Organ Donor Register, a new heart was found. Linzi went into Newcastle’s Freeman Hospital on December 4, 2005, for the operation.

While mum Michelle and dad James waited by her bedside, Linzi astounded doctors by making a speedy recovery, returning to her Ryhope home on December 23.

Refusing to be limited by her condition, Linzi continued with her schoolwork and impressed everyone with her fighting spirit.

But in 2014 Linzi developed the Norovirus which had a huge impact on her already weak kidneys. It was a blow doctors could not ignore as Linzi’s kidneys were only operating at 42% due to the treatment she had received as a baby.

Family members were tested to see if they could be suitable donors. In a bizarre twist of fate, the mum-in-law of one of Linzi’s sisters also agreed to be tested – and turned out to be an ideal match.

Linzi said: “When you are ill, you are just thinking about the present, the future just doesn’t exist.

“Every day is a blessing and you just hang onto those moments.

“So, I never could have believed that one day I would be graduating from the University of Sunderland.

“If you ask my parents, they will tell you I’m not the kind of person that gives up easily, so I think they’re pretty proud today.”