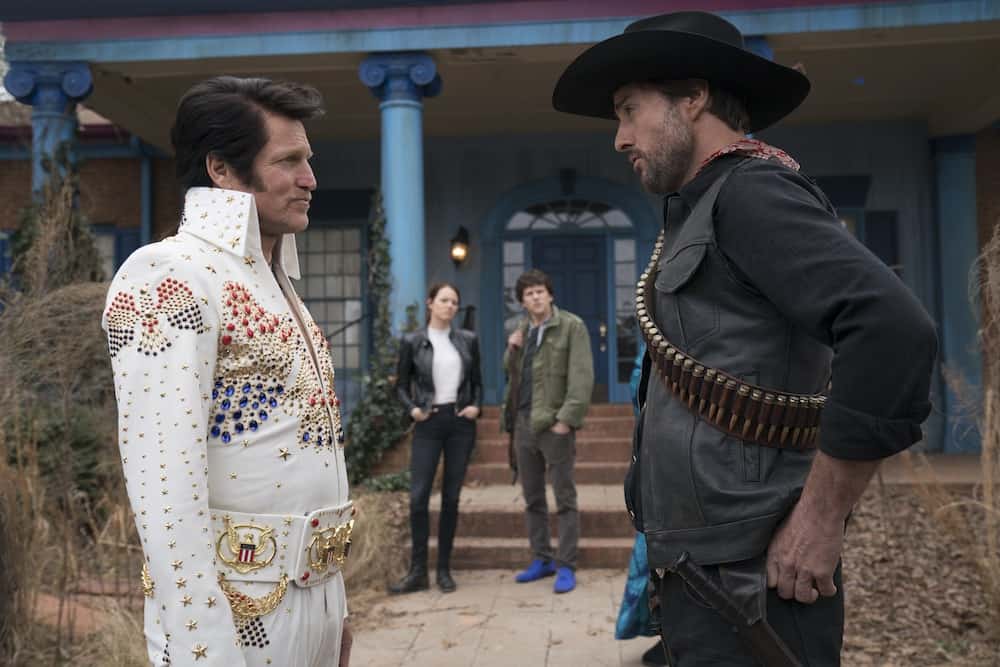 A decade after interest had all but died out for the first film, Zombieland: Double Tap follows up with everyone’s favourite characters, set, rather predictably, ten years after the events of the first film. Characters I didn’t care for mulling around the apocalypse, blowing up pop culture references with miniguns and humour that suits the mediocre original rather well. On the hunt to find the missing Little Rock (Abigail Breslin), the regular gang consisting of Tallahassee (Woody Harrelson), Columbus (Jesse Eisenberg), and Wichita (Emma Stone) set off on an adventure, picking up new friends and enemies along the way. One new enemy they pick up is me, as they make me sit down for an hour and forty, attempting to digest their miserable depictions of storytelling.

Films like these live or die on the chemistry of their cast members. Harrelson and Eisenberg get on as well as ever, the father and son dynamic feels much more fleshed out and funnier than the first. Emma Stone’s inclusion is rather surprising, I would’ve thought that, after La La Land, this sort of work would be “beneath her”. It’s nice to see her sticking to her roots, it’s just a shame she’s not given anything to do. Ruben Fleischer’s return to the directing chair sees him strike the same out-of-tune chords as the first in the series. It feels rather similar to his thankfully forgotten 30 Minutes or Less, a film with about as much consistency as Zombieland: Double Tap, but without a Bill Murray cameo.

Sloppy pacing doesn’t stop the comedy coming through in full force, and at the end of the day that’s the most important aspect. Poor storytelling can be forgiven to some degree when the film itself is rather funny. But a slapdash ending that takes us nowhere but back to the beginning isn’t much of an ending at all. The openness and ambiguity is rather annoying at times, as if the director and crew are trying to preserve these characters, just in case something else should come up five or six years down the line. It’s a possibility, but it leads to a script that plays it safe, character arcs that feel unaccomplished, and humour that feels a tad cheap at times.

Solid comedy from time to time, call-backs to plenty of the first films work. The rules, the inevitable Bill Murray cameo, it’s all there for fans of the original. Whilst not a fan of Zombieland, I can enjoy the sequel to some degree because it knows what it is. It’s a light romp, mocking the previous film and bringing with it a script that plays up to the tropes of these characters that we know and, well, not love. Tolerate. We know and tolerate this group of characters. It’s all about growing up, parting ways, and moving on. It’d be quite touching if it were more focused and not put through the tropes of the Hollywood comedy, as is expected for this sort of film.