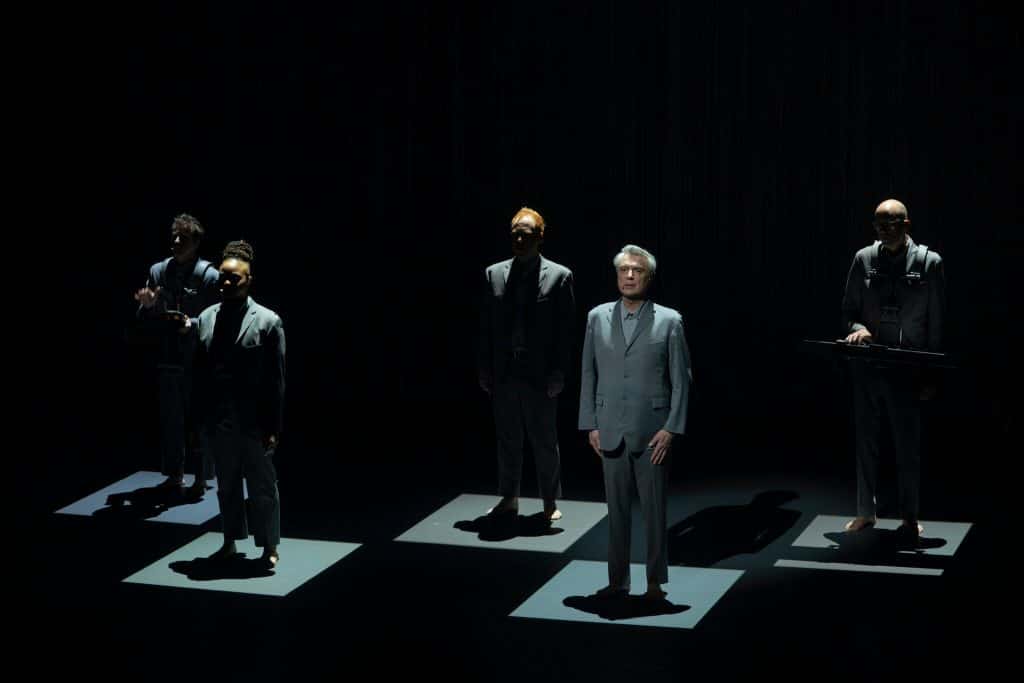 David Byrne has coasted on the surprising success of his latest album for two years now. It’s coming to the end of its lifespan, but has made for an enjoyable change of pace, a welcome one at that. He brings his Broadway performance, American Utopia, to the screen for all to see, and it’s about time. I’ve waited two long years for this release, and my astronomically high expectations could do the film no justice. A glimmer of hope in an otherwise dark year, and an underwhelming one for cinema, this Spike Lee and David Byrne collaboration is an unsurprisingly upbeat, but beautifully choreographed piece that brings the work of Byrne to an artistic level not seen in decades.

A slow start paves the way for some incredibly impressive direction from Lee, and engaging work from Byrne. We should expect nothing less from such a great songwriter. Whilst his solo work is clearly weaker than his work with Talking Heads, he does well to adapt them to the fabric of this live show. There’s not an overreliance on older songs, prominent singles, or 80s material, but there’s certainly a chunk of it lingering around the setlist. American Utopia manages to find the balance between cashing in on the success of the famed new wave band, and finding itself creating a new way of performing music to an audience.

I still find it impressive that Byrne has been able to keep hold of his vocal strengths for so many decades. He speaks a bit of endearing nonsense at us, and then bridges his way into a song that has no connection to what he’s talking about. Any other performer would be laughed at for this behaviour, but Byrne is lauded for it, and rightly so. It portrays him as a comfortable, welcoming figure. He may be the man we look up to on the stage, but the camerawork from Lee has us looking down upon him often, as if we should feel sorry for the man with bottled up thoughts of where our world is heading. It’s a nicely pursued point, one that doesn’t stifle performance or negate the achievements of either director or star.

High angles, vivid lighting, and spectacular focus from Lee’s direction make for a unique performance, and craft American Utopia into something that feels like an amalgamation of Byrne’s lyrical strengths and Lee’s abilities behind the camera. It has within it such a kinetic energy, fragmented moments of perfection that set the bar for contemporary stage productions. To compare American Utopia to the perfection of Stop Making Sense would be unfounded and unfair. This Spike Lee piece is carefully crafted brilliance, highlighting a strong stage performance, delivered by one of the best in the business. Combining a traditional concert with the artistic visions of Byrne and Lee, American Utopia is worthy performance art, cementing itself as a fundamentally enjoyable piece.