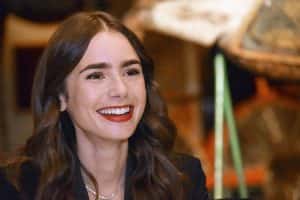 IN 2020, it’s extremely disappointing — but by no means surprising — to see women in a position of power observed and placed through the male gaze.

This misogyny is perfectly demonstrated in new Netflix show Emily In Paris. But then, why is it still such a pleasure to watch?

Perhaps it’s because we know there’s misogyny everywhere. Perhaps, it’s because the form of misogyny Emily is subjected to is reflective of the lived experience of women.

But why should that stop us living our dreams like Emily?

Emily Cooper (Lily Collins) is a hotshot marketing executive from Chicago who lands the chance of a lifetime to move to Paris for a year, after her boss – who is actually fluent in French – gets pregnant and has to turn down the job.

Emily strides into her new chic office with the inability to converse past the word ‘bonjour’. She claims to be a social media marvel simply because she’s American, yet she has a mere 48 Instagram followers. She then informs her new colleagues she’s there to change their entire marketing model.

Did I mention she’s now working for a luxury designer marketing agency which hosts Chanel and YSL? Or that her previous experience is in medicine and geriatric healthcare?

The problem with Emily In Paris is that it’s drenched in American naivety.

Its creator (Darren Star, who also created Sex And The City and 90210) has grasped the notion of the American dream and transplanted it to France, where there’s an entirely different social and cultural context.

There is also a complete lack of cultural awareness on Emily’s behalf. One favourite example of mine is her reduction of Paris – a city renowned for its history, culture and beauty – to its portrayal in a Pixar film. “The entire city looks like Ratatouille,” she says in her ignorance.

However, Emily’s American charm seems to win over French clients, and her career reaches new (and completely unrealistic) heights. She works on a perfume campaign for Antoine Lambert (William Abadie), who is so consumed by Emily’s beauty and charm that he sends lingerie to her desk.

Disregarding the wildly inappropriate nature of their working relationship, she’s asked to work on his new perfume campaign and exceeds expectations.

Thus, regardless of her hard work and new ideas, Emily is inevitably reduced to an opportunist and someone whose success is rooted in her gender.

This objectification of Emily is regressive for working women and endorses a sexist ideology of a woman’s power being (only) found in her sexuality.

This idea is also repeated through her boss Sylvie (Philippine Leroy-Beaulieu), who is having an affair with Antoine (and, of course, in the fact that her first boss didn’t make the trip due to falling pregnant). This is the main reason he stays as a client, despite her wealth of experience and ability to run her office; a concept we are familiar with in Star’s Sex And The City, as Samantha slept with her clients, personal trainer and personal assistant. Charlotte also slept with, and eventually married, her divorce lawyer.

Nevertheless – and here’s where I question my feminist doctrine – I thoroughly enjoyed binge-watching Emily. Despite the Americanised, misogynistic and unrealistic narrative, there’s something about Emily and her endeavours that has the viewer hooked and rooting for our misguided protagonist.

Perhaps it’s that Emily’s adventure resonates with us because it is so reminiscent of themes we can relate to, such as not belonging and the success of the underdog.

When Emily first lands in Paris, her French colleagues, unsurprisingly, don’t like her, given the fact she has made no attempt to learn the language, and challenges their work culture.

She is called La Plouc, which translates to ‘the hick’, and is isolated. This provokes an emotional response as we watch, especially those who’ve ever had a bad first day in the office. This builds our relationship with Emily and adds a humane aspect to this seemingly perfect girl in the new life she’s acquired.

Emily is undermined and undervalued, and her ideas are disregarded with a great deal of snobbery from her colleagues. So when Emily’s career gains momentum, the viewer is longing to know what Emily can achieve and what she’s doing next.

Additionally, the ongoing ‘will they/won’t they’ intricate love triangle between Emily and her neighbour/best friend’s boyfriend Gabriel (Lucas Bravo) leaves viewers equally frustrated and entangled in their affair. And we all love a complex, emerging relationship.

It’s a classic TV formula to leave viewers emotionally invested. It’s a French ‘Ross and Rachel’, but much more mischievous.

SPOILER ALERT: Emily does eventually sleep with Gabriel after he is offered a job in Normandy and breaks up with Camille (Camille Razat). The series concludes when Gabriel decides to stay in Paris after Antoine buys his restaurant. While this car crash of a relationship proves Emily to be a dreadful and untrustworthy friend, however, the drama makes phenomenal television. This encounter sets up a potential second season and I’m looking forward to seeing how Emily manages to justify her behaviour. Perhaps, this is the end of Emily’s American charm and good fortune.

And let’s not under-play the importance of the beautiful backdrop of Paris and exciting opportunities in the fashion industry comparable with a modern-day, budget Devil Wears Prada. All of this, combined makes the perfect formula for a binge-worthy Netflix show.

I highly doubt that if, instead of Paris, Emily was shipped off to Birmingham and, instead of a high-fashion marketing brand, she was running the social media for a supermarket, the show would appeal. It’s the same model that popular shows such as Gossip Girl, as in unrealistic depictions of popularity and success that people strive towards, and yet it seems tangible, as if the viewer is watching something that they could achieve.

In a way, I believe we all want to be Emily In Paris. The question is, how much misogyny are we willing to put up with to be her?