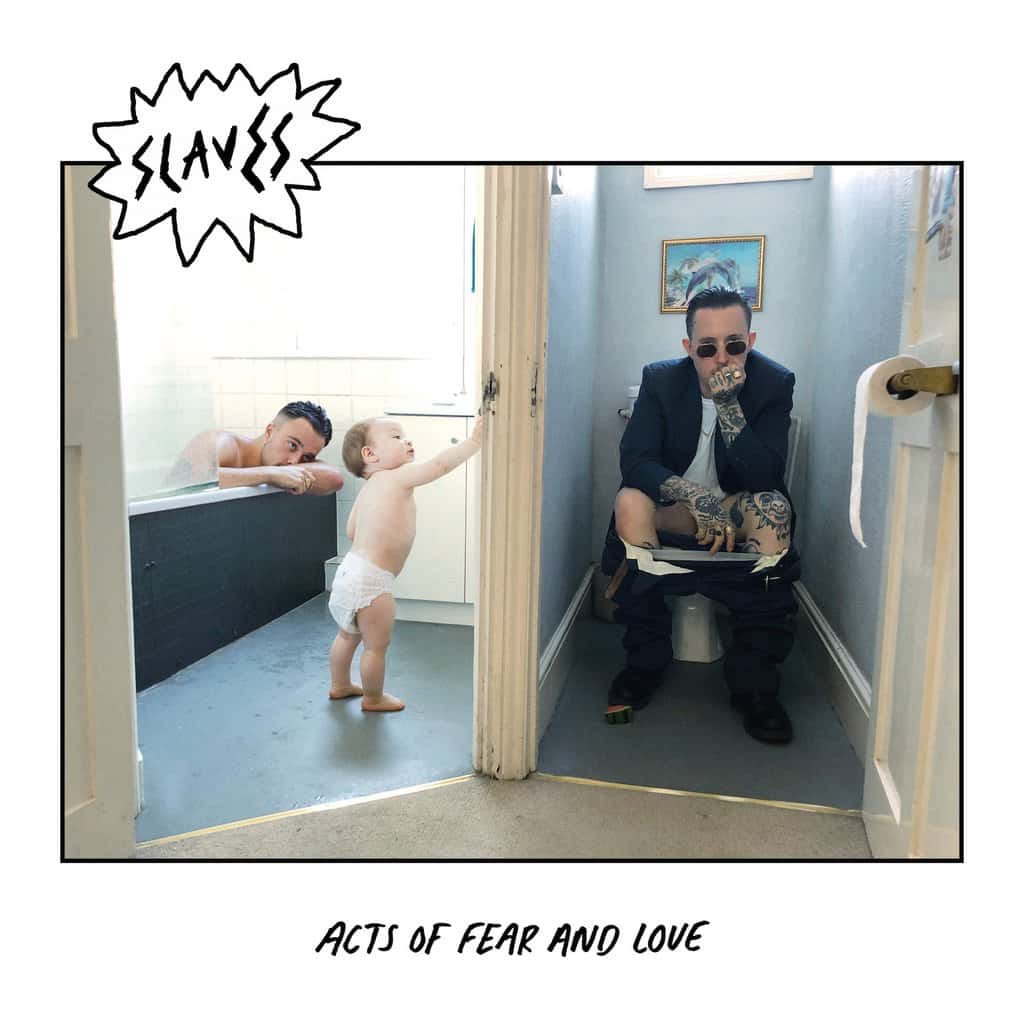 The punk duo return – and so does their signature grit.

But with a refreshing new twist.

2018 is looking promising for bandmates Isaac Holman and Laurie Vincent, as their third album has pulverised the punk scene and continues to infuse their trademark angst into the music world.

Since their initial breakthrough in 2015, there is no denying that Slaves have proven that punk ain’t dead. The Maidstone pair have landed three consecutive albums within a three-year stretch, highlighting the volume of their work ethic and, perhaps more figuratively, representing the speed and stamina that spills from their songs. You’d be forgiven for assuming that, in this small expanse of time, such rapid production would leave their content fatigued. Acts of Fear and Love, however, could not sound more alive.

Acts of Fear and Love holds nine new tracks under its belt, all accompanied with some degree of lead vocalist Issac’s usual Kentish hollering. Fans should be pleased upon realising that a noticeable flavour of this embellishes the lyrics of fourth track Magnolia, with a headstrong Isaac hammering the listener with the exclamatory “Did you know: sixty-five percent of UK homes contain at least one magnolia wall? I bet you didn’t!” Deliberately obnoxious, this opener invites us back into the good old days of 2015’s Are You Satisfied, where even the album title itself theoretically teased musical mischief.

The grit of this particular track positively draws comparisons with 2015 singles Sugar Coated Bitter Truth or Cheer Up London, with all tunes boasting a sense of brutal honesty directed at society. Words in 2018 like “its a bombardment of external influence” in Magnolia, alongside 2015’s “don’t trust the flies, they are Government spies” in Sugar Coated, suggest that Slaves have remained faithful to their anarchic roots. While some may argue that magnolias lyrics may not be their strongest, with guitarist Laurie’s “do it do it” dominating most of the chorus with a pop-like repetition, the track shows that the blueprint of Slaves’ original persona is still very much there in this album.

It’s difficult to imagine Slaves not sounding, to put it bluntly, seriously bloody angry. So difficult in fact, that by the time fifth track Daddy begins to gently seep (rather than blare) into the open, it is easy to find yourself questioning whether Isaac is feeling okay or not. Nonetheless, while the contrast between this and the prior four tracks may be stark, it is surprisingly refreshing to hear. Lyrics like “daddy’s got a new car, driving with the roof down” and “making up for lost times, things he wishes that he did” offer a style that is significantly more delicate and subtle. Again, a similar melancholy tone in seventh track Photo Opportunity bleeds from the poignant “now she has to leave, but I need her to stay“. None of us knew it, but this is the vulnerability that Slaves needed to thrive in 2018.

Fans know that the art of subtlety has never been Slaves’ usual bag, and may choose to resent this change, but it really does work.

We may no longer “trust the flies“, but we can be sure to trust Slaves with whatever they bring next.