On the back of films such as Hacksaw Ridge and Whiskey Tango Foxtrot, 2016 closes with another war film, Allied.

A gripping tale of heartbreak and betrayal set in the the dark days of World War Two, the film stars Brad Pitt alongside Marion Cotillard. It explores a lesser-seen view of war from that of the intelligence branch rather than the common line of infantry warriors. It does lend itself to romance thrillers such as Casablanca with work behind enemy lines and lots of picking off Nazis.

Brad Pitt stars as W. Cdr. Max Vatan; Marion as the almost-heartless Marian Beauséjour from the French Resistance. Both deep-cover agents with their respective forces who get emotionally attached to each other during their assignment. This leads to a wedding after they both return to the UK. However, this is where the film builds up speed fast before billowing through an overly packed second act.

It seemed as if Robert Zemeckis was trying to build the film within the runtime instead of the runtime around the film. This “rush” does however work in the benefit that it shows the rush of emotions and rashness of many of Vatan’s actions. Zemeckis does however successfully cover and conceal many of the films key elements keeping viewers on their toes as to what to expect, but not to be able to trust everything at face value. One of Cotillard’s lines does however work as a foreshadowing phrase that echos throughout the film to the very end.

A major problem however, is an unconvincing lead couple. While some moments are heartfelt, most of the time it seems as if they’re just placed there with no emotion. Marion remains mostly unreadable for most of the film except the scenes involving her child. One could say she’s still keeping a distance from a relationship she is seemingly very heavily into. While Brad Pitt shines in explosive scenes, he does remain deadpan and flat for most of the film. 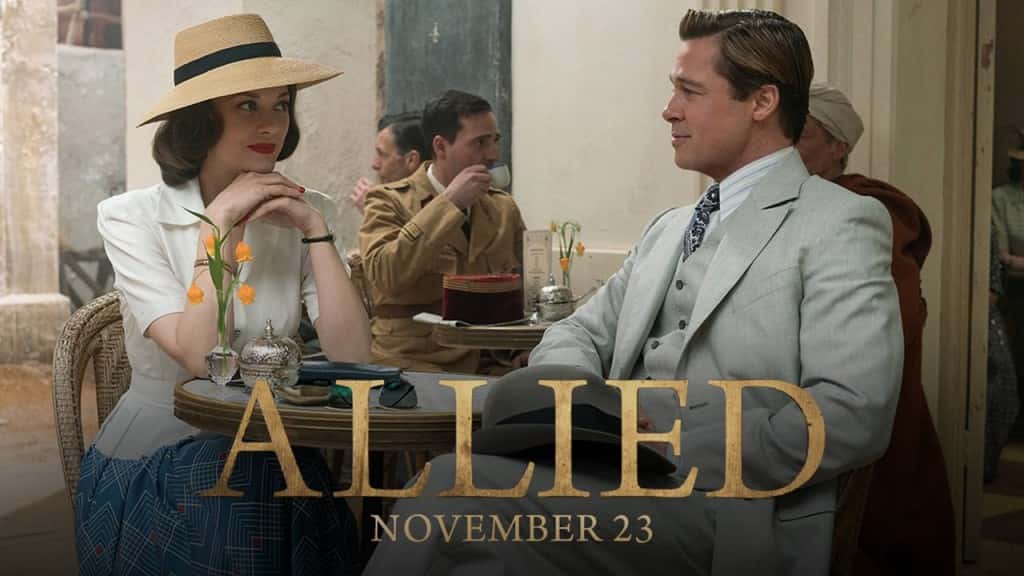 At what could have been the film’s climax, his character becomes even more deadpan and partially unrelatable by the audience members.

However, of praise is Steven Knight’s script. Building up from a traditional Hollywood spy romance before blending into a seemingly mind-boggling spy versus spy witchhunt.

One of the more devious moments is when Simon McBurney cameos as an unidentifiable higher-up from V-Section. The Secret Intelligence Service (MI5) counter-espionage team. Simon’s pure role is to roast and grill Brad’s Vatan to the breaking point and beyond to ensure his co-operation to snare his wife.

Allied does do a fantastic job at testing the strength of a couple’s relationship when under pressure. Can two star-crossed lovers still maintain their relationship with the knowledge that they’re both professional liars? Would the cogs of war however pull them apart even further?

More importantly is the question of whether their pet chickens can survive the London Blitz.

In contrast to Zemecki’s recent film “The Wire”, Allied may seem technologically “handicapped” without the drones and high-wire scenes. It is however bolstered by a host of classical bare-bones filmmaking in it’s best form. To be taken note of is a whirling scene inside a car caught in a sandstorm. A perfect showcase of Zemecki’s skills as a filmmaker.

Overall, the film does shine through it’s script, but it doesn’t really have the spark or chemistry to tie it down for a solid finish to make it a movie that will live long in the memory.