We start off the top 10 with Samuel L. Jackson’s iceman, Frozone was a super hero within the 2004 pixar movie The Incredibles.

As best friend to Mr. Incredible, Frozone’s powers are more linked to freezing moisture within the air, which makes sense as water vapour makes up 1% of our atmosphere where as nitrogen which is a particularly cold element makes up around 78% of the atmosphere.

As one of the few heroes to have escaped Syndromes gaze he takes a stand when the Omnidroid starts attacking, while we never see the full extent of his powers, Frozone is still one of the best cryokinetics landing at number 10.

A scientist in the field of cryogenic research, Dr. Victor Fries was once an accomplished scientist until his wife Nora was stricken with a disease and he was forced to put her in cryogenic stasis.

This was all until a corrupt corporate executive stole Nora and left Victor to die in a vat of cryogenic chemicals, however, the chemicals altered Victor’s metabolism allowing to him to survive in sub zero environments, turning him into the ice cold super villain Mr.Freeze.

Surprisingly of all the batman villains, Mr. Freeze is the least evil, mainly due to the fact that his ultimate goal is to save and cure his wife, it’s just his methods that make him a villain.

While he hasn’t made an appearance in film since 1966’s Batman and Robin, he was one of the best bosses in the Batman Arkham trilogy as he adapts to the player’s tactics and if you manage to damage him one way, that way won’t work a second time.

To quote freeze himself :”I learn from my mistakes Batman, Do You?” 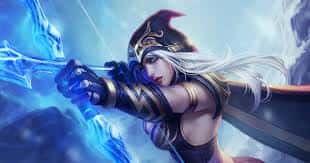 At number eight we have my favourite champion in League of Legends, Ashe the frost archer.

Born in the Frelijord a northern polar region of the land of Runeterra, Ashe was always a dreamer and had a hope for unity amongst the Frelijord. However, when she was 15 her mother was killed during a raid on a tribe, and instead of attacking, she appealed for peace, something that didn’t sit well with her fellow tribesmen, and they sent assassins to kill her while she was out on a hunt.

While on the run from her would be assailants, Ashe found a rune stone and a bow completely made of ice. She used this weapon to awaken a power within her, the bow was once used by an ancient Frelijord queen and Ashe would be her successor.

Ashe’s power, her passive ability, is frost shot which slows targets and makes subsequent attacks deal more damage. Critical hits will enhance the slowing effect and with rangers focus she can attack faster and volley allows her to fire out nine arrows at once. Her hawk-shot allows Ashe to send a Hawk spirit out on a scouting mission anywhere on the map and her ultimate is enchanted ice arrow, a giant arrow that she can control the flight path of.

Overall, Ashe is an amazing cryokinetic, though she loses points as her ice powers are tied to her main weapon.

Vexen fights using a shield and ice, while Axel uses two chakrams and fire, it makes sense that the two are opposites. Vexen is loyal to Xemnas but he doesn’t really care about who’s in charge, at least until Marluxia gets some blackmail on him.

In Kingdom Hearts Lore, Vexen is actually the first of Organization XIII to be eliminated, ironically by the hands of Axel. in battle, Vexen hides behind a shield and collects data, once enough has been collected he will create his own anti-form of Sora’s heartless form.

Overall, Vexen is a pretty good cryomancer but a rubbish fighter.

The first ice ninja on the list, Haku is an orphan raised to be a mercenary. He utilises a mixture of water and wind based energies to create his Jitsu style Ice Release.

His most notable technique is his crystal ice mirrors which he used against both Naruto Uzimaki and Sasuke Uchiha.

Abnormally strong due to his genes, Haku killed his own father at a young age in self defence after his father had killed Haku’s mother, however that was his only kill, unlike his teacher Haku only puts his opponents into a death-like state so they can’t fight any more.

At number 5 we finally have the strongest Ice type Pokemon: Kyurem.

At number 646 in the Pokedex Kyurem has a base stat total of 660 and is the only Pokemon to have this base stat total. With Attack and Special Attack being its strongest stats and its weakest stat being its defences, a glass cannon.

Kyurem was once a part of a greater dragon but then its two counterparts, Zekrom and Reshiram, split off due to differing ideals.

Ironically, Kyurem is the opposite to both Zekrom and Reshiram as Zekrom is an electric type and Reshiram is a fire type. Both are forms of energy, but ice is the absence of energy and thanks to team plasma’s meddlinh, Kyurem can become either Black Kyurem or White Kyurem. Both have a base stat total of 700 which is the same as most legendaries and even Garchomp, Metagross and Salamence. Black Kyurem retains the high attack of its base form but loses some special attack and White Kyurem is the opposite, and the two have exclusive moves, Black Kyurem has freeze shock and White Kyurem has Freeze Burn.

With metallic objects below zero degrees, Kyurem can become super conducted and as such can be held in place by a magnet via flux pinning which explains the electricity, and when objects of a sufficient negative temperature collide with an object of a positive temperature they can attract thermal energy toward the object with the greater temperature.

The resident ice summon in the final fantasy series, Shiva takes her name from the Shiva from hindu folklore, but thats the only cultural link.

Square-soft ended up getting both the element and gender of shiva wrong, but only to the summon herself, Shiva first appeared in Final Fantasy 3 as a lower level summon but, in final fantasy 9 she got a huge buff, and she’s stuck around since 9 and has appeared in 10, 13 and 15, there have been multiple incarnations of this frosty spell-caster the most odd being the shiva sisters in 13 Stiria and Nix, they’re two frost maidens who can become a motorcycle, Shiva’s signature move is diamond dust, where she not only freezes the enemy party but she shatters them with a snap of her fingers, and in the MMO, Final Fantasy 14 a Realm Reborn, she is one of the fightable bosses alongside the ruler of the summons, Leviathan, overall Shiva is more than deserving of the number 4 spot.

I cannot leave Sub Zero off this list, and as the second ice ninja and one of the Mortal Kombat series flagship characters, how could I.

Sub Zero the younger, Kuai Liang, Kuai was apart of a clan of assassins called the Lin Kuei, along side his brother Bi han who was once known as sub zero. After his brother was killed by fire ninja scorpion, Kuai took up the mantle of Sub Zero to avenge his brother.

As a cryokinetic, Sub Zero is by far one of the best, he can create Icy doubles of himself and even freeze his enemies solid. For him to shatter and his spine rip actually lead to the creation of the ESRB and Pegi rating systems, though he’s only at number three as I have an infentecimal amount of experience with mortal kombat.

At number 2, we have Weiss Schnee of RWBY, A cryomancer who also functions as a spell fencer. Weiss was born into a wealthy family who gained their wealth through some controversial means.

She eventually left home to join Beacon academy and become a huntress as she wanted to help others, eventually becoming apart of team RWBY lead by her partner Ruby Rose, the ice powers stem from her aura which manifest as snow glyphs, her main weapon Myrtenaster is a rapier with a revolving chamber allowing her to change her dust type. However, her most common type used is ice, and her glyphs semblance have a snowflake pattern to them so she counts but due to multiple dust types she cannot be number 1.

Rundas is a cryokinetic, alien bounty hunter who is part of a team of bounty hunters in Metroid Prime 3, alongside Ghor who is an alien who can merge with an armour suit, Gandrayda a shapeshifter and gaming’s first lady herself Samus Aran, during an attack on a federation base, while samus deals with the ground forces, Rundas takes out several space pirate drop ships, he even saves samus from falling to her death after a run in with omega ridley,

However, it’s his boss fight that places him at number 1. Rundas is very much Samus’ equal in combat ability, he glides around on ice using various ice towers for cover. In order to damage him, you need to tear off his armour then shoot him whilst in hyper mode, but Rundas has one ace up his non-existant sleeves.

His own hyper-mode, where he creates a giant ice flail to try and crush samus, often deliberatley destroying his own ice towers in the process, and then in an uncontrollable burst of power he ended up impaling himself on an ice spire.

Here’s the thing, Rundas’ abilities are natural, there is no technology or magic involved, while you could say the same about cyril in part 1 but we never saw his powers, here we clearly see Rundas’ true power, for these reasons, I can place rundas at number 1 in our list.