Mel Gibson is back in his director’s seat. Andrew Garfield has swapped his Spider-Man costume for a soldier’s uniform. Vince Vaughn has traded in comedy for action/drama. If these aren’t good enough reasons to see this new instalment of war movies based on true stories, nothing ever will be.

Mel Gibson (Braveheart) is known as one of the leaders in the film industry telling the stories of unlikely and unsung heroes. This is no exception. The story of a man named Desmond Doss is an inspirational one. He became known as the soldier that refused to take a weapon into battle due to his religious beliefs. However, despite this, he was soon looked at as a war hero as he saved around 75 lives single-handedly.

Andrew Garfield (The Social Network) was the man tasked with portraying Doss to the world, and he did a magnificent job. However, Darcy Bryce must also get a mention, as he played a young Desmond, and showed you his violent younger ways. This was due to his abusive father, who coincidentally became a drunk after serving in The Great World War. In later flashbacks, we find out why he is against even holding a weapon, as he stands up to his father when he hears his dad beating his mother.

As soon as the film cuts to Desmond as a young man, the next twenty minutes is cornier than you’d expect in a war film. It concentrates on him falling in love with the woman that will soon become his wife, Dorothy Schutte, played by Teresa Palmer (Warm Bodies). If you have ever watched a Mel Gibson directed film, you’d know he enjoys his love stories to be over-the-top romantic. Sometimes this works, however it is the one element of this film that could have benefited from a little toning down, as the love story at times becomes too cheesy to watch. 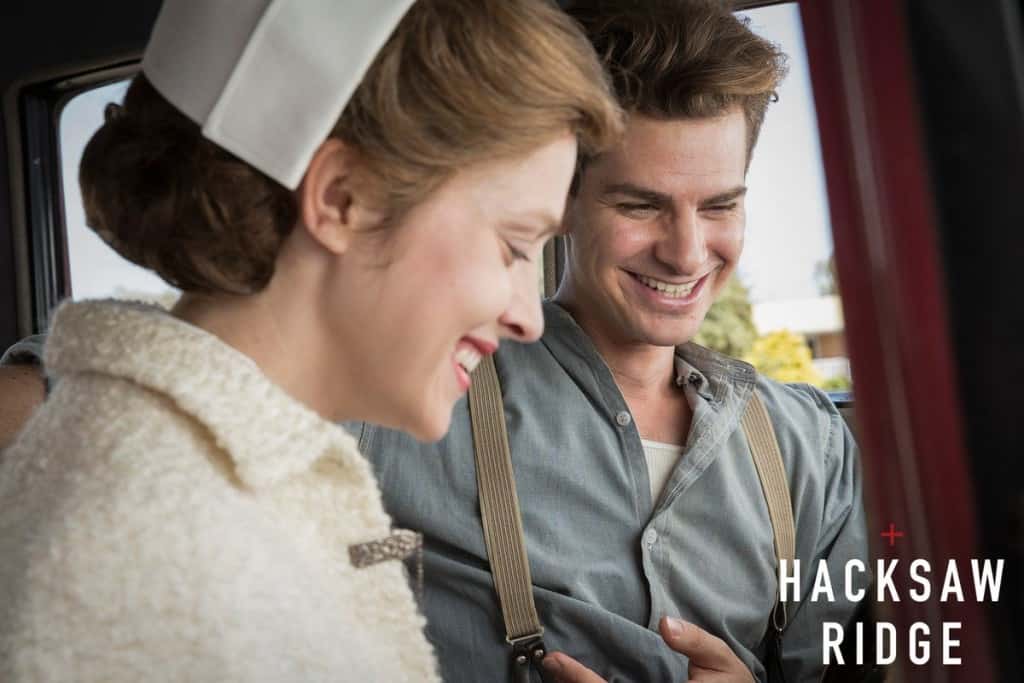 Having said that, as soon as Doss’s journey in the army begins, the corny love story is forgotten about, and here’s where the real drama happens. The acting during the war-set scenes helped you feel as though you could capture the real essence of war life. Vince Vaughn (Wedding Crashers) plays Sergeant Howell, an angry, strict, loud and intimidating character that underestimates Doss. However, he isn’t the only one. Captain Glover, played by Sam Worthington (Avatar) and Smitty Riker, played by Luke Bracey (Point Break) are also among the many characters that gain an instant dislike towards Doss. However, Desmond soon changes their opinions on him in the most wonderful way.

Desmond’s story of how he overcomes the hatred, bullying and violence towards him is truly mesmerising. From being locked up for disobeying orders of training with a rifle, to becoming a heroic medic in World War 2, you can’t help but route for him the whole way through.

This also would not have been possible without his father’s help, Tom Doss, played by Hugo Weaving (The Matrix). In a surprising, heart-warming turn of events, against his hopes that his sons would never have to see war, he in fact helped Desmond to be allowed on the battle field with no rifle training. 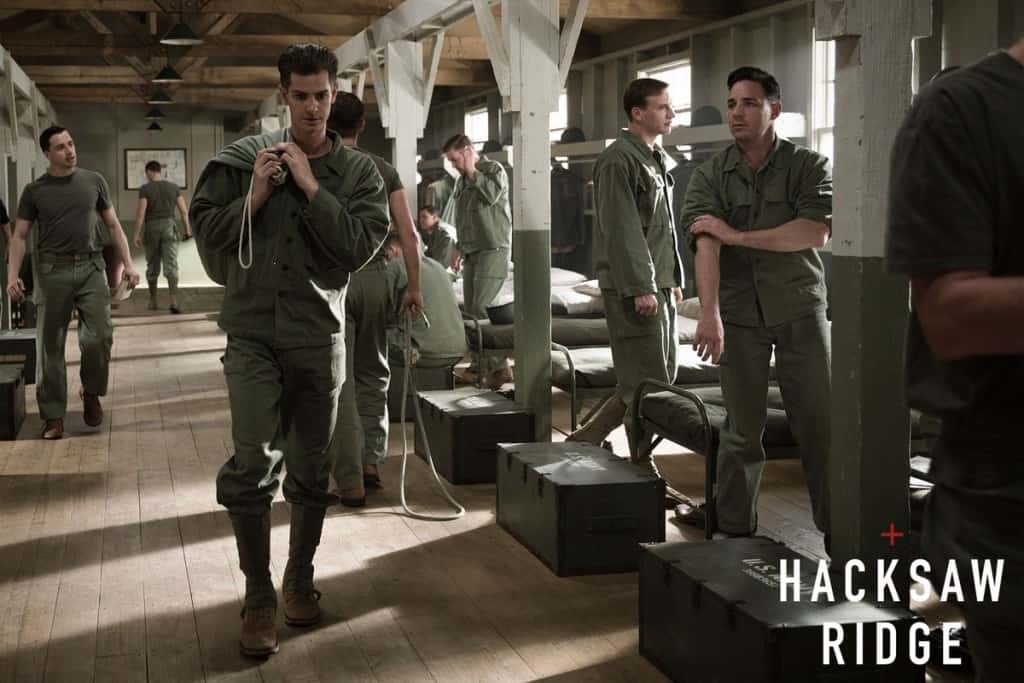 War films can be seen as overdone and old fashioned, but the subject is one that should never be forgotten about. The incredible effects in this film bring the war genre into the modern day. Not only do the surprising gun shots at intense moments make you jump, but the awe-inspiring camera work makes you feel as if you are in the middle of the action with the men. Battles in films can occasionally risk becoming boring and losing your attention, but this movie keeps your eyes glued to the screen.

The best way to describe this epic movie is Braveheart in the middle of World War 2. The film is no doubt directed by Mel Gibson, but in a way this makes it even better. His epic, beautiful, intense way of telling a story stands out in Hacksaw Ridge. The brilliant acting and breath-taking effects and camera-work just make this story even more impressive.

In a world full of very large and muscly superheroes, it’s refreshing to be introduced to an unlikely hero that is full of morals, bravery, and an infectious personality. At the end of the film, the audience is given one last treat; some interview footage with the real Desmond Doss himself. Not only does this reassure you how true the story is, but also proves just how modest and brave the man was. He was a true inspiration to us all.