Back in 2009, Halo made its first foray into the Real Time Strategy (RTS) genre with Halo Wars, which was the last game made by Ensemble studios who were champions in the RTS Genre. The first game was good, but now a sequel is on our hands, the long awaited Halo Wars 2.

The story takes place in the year 2559, 28 years after the first Halo Wars, revolving around the UNSC Ship the Spirit of Fire, a Phoenix class colony ship re-fitted for military use. The ship was declared lost with all hands in 2534, after the UNSC lost contact with it, however the ship is still active and the crew is alive and well, the ship has now found its way above an alien artificial world called The Ark, which halo fans may remember from Halo 3, as the place where the Halos were created. 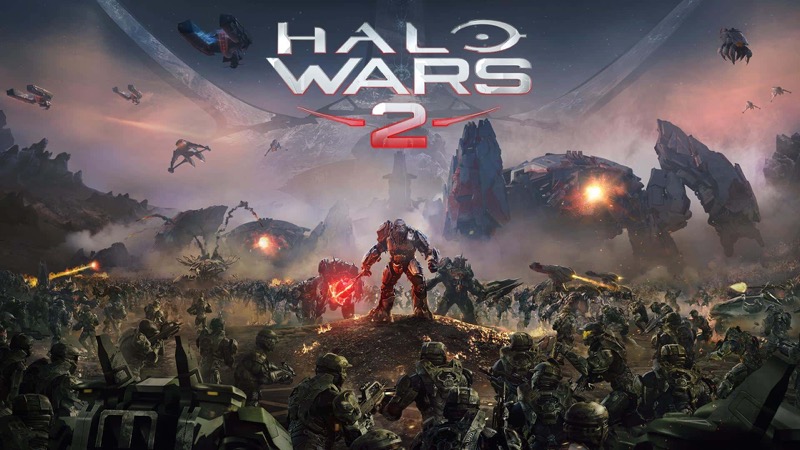 James Cutter, the captain of the Spirit of Fire, awakens to find the ship board A.I. Serena gone, having initiated final dispensation back in 2537, he begins to plan with Professor Ellen Anders on what to do, ultimately he sends a small recon team down to The Ark to figure out what’s going on, lead by Spartan red team, however once they reach a human research outpost they find a logistics A.I. named Isabel, Jerome-092 the leader of red team, tries to ask what happened, but the team are soon ambushed by a single brute. The three barely scratch him and Douglas-042 is critically wounded after the brute crushed a portion of his Mjolnir armour, the brute then proceeded to crush his helmet after knocking him to the ground, the three spartans then retreated, with Alice-130 remaining behind to ensure that Jerome and Douglas could escape.

Once aboard the Spirit of Fire, Isabel explains who the brute was that attacked red team, his name was Atriox and he leads a covenant splinter faction called The Banished. Atriox is the only one who has defied the covenant and lived to tell the tale, the banished themselves are very much similar to the barbarians who brought Rome to its knees, they use covenant vehicles but they’re fairly crudely made, for example their scarabs use plasma generators that are unstable, and they often use scavenged weapons and vehicles, Isabel says to cutter that fighting the banished is suicide as they slaughtered everyone at the research outpost, and three spartans barely survived one encounter with Atriox, the rest of the campaign focusses on the skirmishes between the banished and the Spirit of Fire, in an effort to stop them from using the ark for their own needs.

Gameplay is very similar to Halo Wars 1 with a few differences here and there, first off, technology tiers are now acquired by upgrading your base itself, rather than building reactors. In addition the reactors are replaced with generators which produce the new power resource, a majority of UNSC buildings and units are still there such as Marines and warthogs, however there are some changes. For one, Marines are no-longer stationed in the barracks, instead they are trained out of the command centre, and they don’t start with their grenade ability, in addition warthogs have been upgraded to core vehicles and are trained out of the garage which is replacing the vehicle depot. The UNSC has a new scout vehicle – the Jackrabbit. A space motorcycle with an attachable mini-frag launcher, in addition the flamethrowers or ‘hellbringers’ as they’re called in this game are now building killers replacing the cyclops, in their place as anti-infantry are the snipers. Cyclopses are still there but now they’re anti-vehicle infantry similar to the hunters. There are also some new vehicles like the previously mentioned Jackrabbit and a new air unit called the Nightingale which seems to be an early prototype of the UH-144 Falcon from Reach, but instead of machine guns and troop transport, they have restoration drones and a smoke grenade launcher.

New to the UNSC arsenal is the M400 Kodiak. A mobile artillery unit with a machine gun and a main artillery gun which it has to lockdown in order to use. Vultures are no longer the ultimate unit for the UNSC which means they lose their hijack immunity, the replacement is the D81 Condor Gunship, a spin-off of the Pelican Dropship intended for usage with civilians and colonial militia but these Condor Gunships are armed with prototype pulse laser weaponry, and a magnetic accelerator cannon effectively making it the most powerful human aircraft ever designed.

The Banished also have their own unique units. For example they use both regular grunts and suicide grunts, however the suicide grunt squads have no weapons aside from their plasma-methane tanks, their hunters are the same as the covenant hunters except more violent. There are no jackals within the banished instead they use elite ranger squads for anti-infantry combat, there are also jump pack brutes armed with gravity hammers. The banished also make use of the brute chopper, armed with modified auto-cannons which can accommodate explosive rounds, The T-26 Wraith makes a return with a new look, and it’s scorch ability is retained. Locust walkers make a return too alongside their bigger brothers the T-47B Scarab. The banished also have their own vehicles, such as the Blisterback, a heavy hexapedial siege unit, which is armed with Annihilator siege missiles, the shroud which is a camo projecting air unit, and the banshees have had a huge overhaul being armed with Plasma Torpedoes which are weapons designed to Anti-Ship use. Their new tanks are the Marauders modified prowlers which have special weapons that can stun enemies as well as damage, and finally the Reavers which are anti-aircraft walkers.

Overall the game can be tons of fun and it’s really good. The banished are intimidating foes and are fun to play as, playing as old favourites is also a huge blast.