Pretty Little Liars: Is the secret finally out?

The story that has taken over not only my life but many others all over the world began on the 8th June 2010 and has skyrocketed all the way through 6 and a half seasons, over 7 years. Now, its 2017 and we are still sitting waiting for many answers to the endless questions we have, but according to the show’s writer I. Marlene King, all will be revealed very soon. Soon meaning exactly 18th April 2017…who’s excited?! 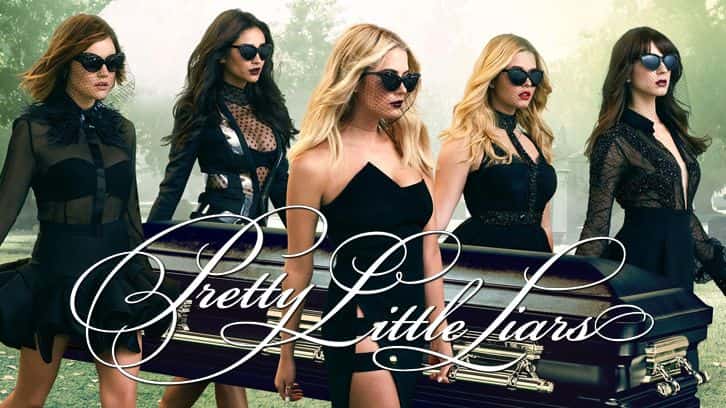 In the last episode of season 5, we are shown Aria (Lucy Hale), Spencer (Troian Bellisario), Hanna (Ashley Benson) and Emily (Shay Mitchell) waking up in what we find out to be their replica bedrooms, built by the evil mastermind that is A. All the way through they are made to do heinous things behind locked doors, which we don’t see but can only imagine what horrors when on.

Season 6, episode 1 picked up where the previous season left off, 4 liars and Mona in their pretty prom dresses running towards freedom. The question is, will they get it?

As the girls make it to the outside world, we have hope, until they run straight into a  humongous metal fence. I wont carry on spoiling any more for you people that haven’t seen it yet. For the next few episodes until episode 10, the girls carry on with their drama filled lives.

The last episode of season 6a, it begins with the girls running through Radley Sanitarium looking for A. At exactly 8 minutes 13 seconds, Cece Drake/ Charlotte DiLaurentis (Vanessa Ray) is finally reviled to be A!

Season 6a comes back and catapults us 5 years forward where all the liars have moved on with their lives and Spencer has a fringe (biggest shocker of the season). The liars are back to speak at Charlottes trial and all of the past is dragged back up once again.

6b was a very good season, cleverly pushing the girls 5 years forward surely sped up the show a lot. One thing I would say though, there’s still a lot of unanswered questions floating around and the list just keeps getting longer. To be honest, that has been the problem with the whole show, right from season 1. Don’t get me wrong, I have a lot of love for this show but it hasn’t half dragged on, some episodes are just unnecessary and we would have gotten to the point a lot faster if we didn’t have to traipse through 6 and a half seasons, soon to become 7.

As we prepare for the final ever season of Pretty Little Liars, we must look back at all we have been through. We were left with a heart wrenching, thrilling episode in season 7 episode 10. Hanna prepared for war where she was finally going to rip the metaphorical mask from A’s smug face after she was held captive yet again and tortured by. I must say, when Hanna sacrificed herself for the sake of her friends and to find out who A was and to end this nonsense for once and for all, it couldn’t have been done better by anyone other than Ashley Benson. The way the actress portrayed her character who was in severe distress and fear was carried out very well and convincingly. It almost made you want to cry in anger along side her. Although Hanna did very well in her warrior scenes, she grabbed the heart of the audience when she rekindled her love with her teenage sweetheart and soulmate Caleb (Tyler Blackburn), so heartwarming and beautiful. While some were embracing their happiness, Aria bid the love of her life farewell as he went off to save his fiancee Nicole who went missing sometime during the 5 years we missed. During this episode, we witnessed quite an unrealistic, almost humorous scene where one of the bad guys was decapitated by a historical battleaxe. Poor Noel (Brant Daugherty) who had just escaped being held captive and tortured by Hanna just 30 minutes before, was recovering from a stab wound from being stabbed in the thigh by Hanna, walked straight into his death. Along rolled Noel’s decapitated head hitting the boots of Aria, Spencer and Alison. It was so unrealistic I almost laughed.

We ended the episode with a thrilling and dramatic scene where we had our hearts pulled straight from our chests as Jenna (Tammin Sursok) shot our beloved Spencer. As our eyes were stinging from not blinking because we didn’t want to miss a second, Mary Drake (Andrea Parker) sang Spencer to sleep but not before telling her “I’m your mother”. Extremely confusing.

So, we must get ready for season 7b to hit, armed with our list of questions which are apparently all going to get answered according to writer I. Marlene King. Here is what is expected for the final ever season of Pretty Little Liars…

Betrayed by our own?

There are many rumours floating around the world wide web but one that shocked me the most was the rumour that Aria and Ezra (Ian Harding) might have been working alongside A all this time. Not exactly sure where the evidence is to support this theory but it would be shocking if it came true. Another rumour for this pair is that they have a wedding coming up if Aria says yes to Ezra’s much awaited question.

Another who is A theory is that it could be Spencer! According to mobilenapps.com, Spencer’s shooting could have been staged. After many years of the shows most loyal fans guessing, predicting and theorising who could be in the running to be Uber A, if this rumour becomes true, all of that could have been pointless.

Back from the dead?

Another rumour which everyone is talking about is that Charlotte DiLaurentis is alive! After she fell (or was she pushed?) from the church tower right in Rosewood’s town centre, everyone assumed she was dead. Perhaps not. We all know Charlotte hated all of the Liars but Spencer was probably her least favourite. Theorists suggest that Charlotte didn’t die when she hit the ground after falling from the top of the tower and that she went into hiding because she now had freedom and was waiting for the right time to make her move. She then came out of hiding and had something to do with Spencer’s supposed fatal shooting.