Pikmin – “a paradise for those who like to rush through games”

Back in 2000 at E3, there was a tech demo shown off called Mario 128, which showcased 128 mini Mario’s running around on a circular platform to show off how many individual AI programs the Gamecube could support and even showcased platform alteration, the latter was used in Super Mario Galaxy, but I’m here to talk about the former which was used to create an entirely new series called Pikmin. 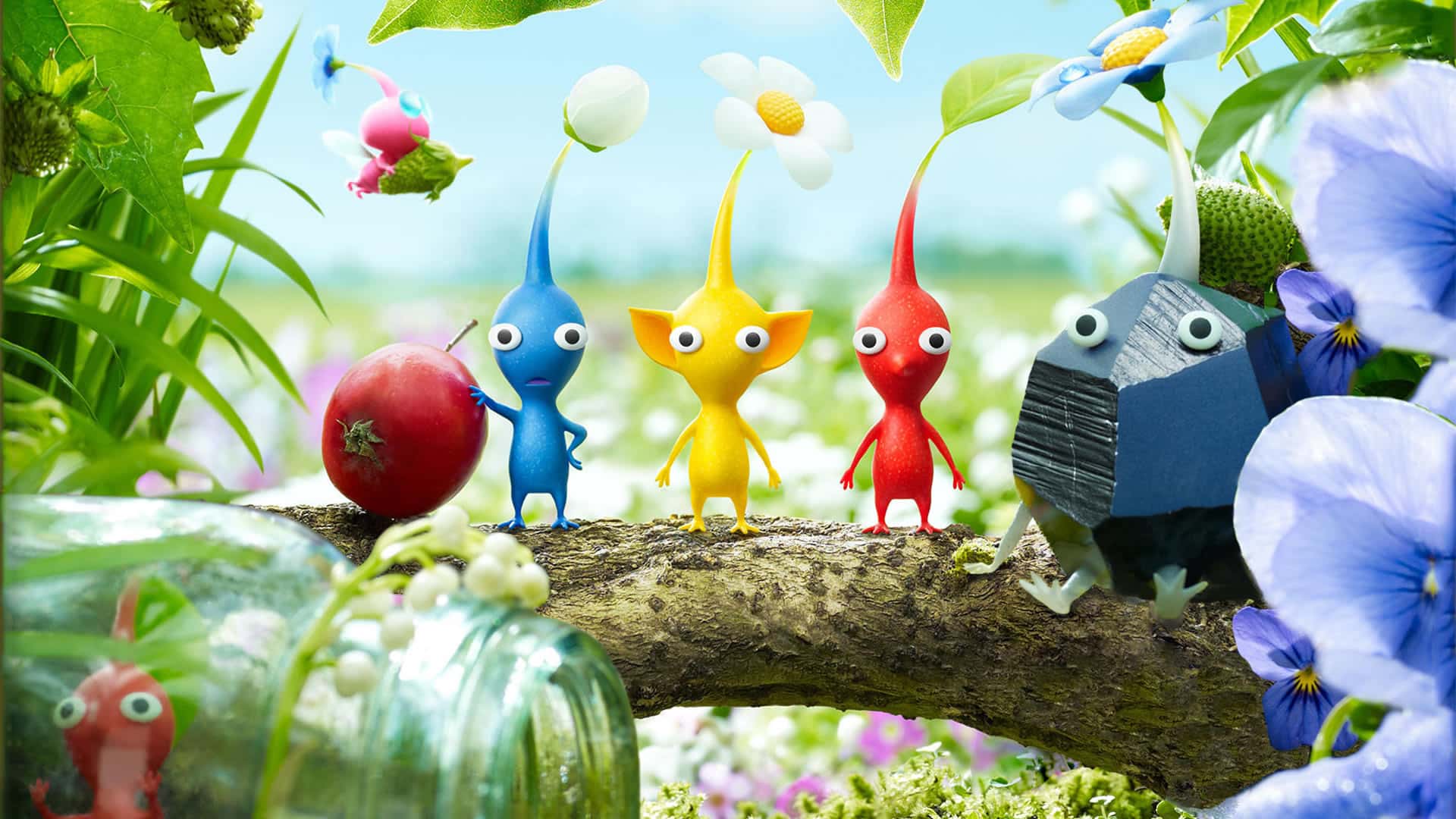 The story begins out in space with a space captain named Olimar, as he returns from a space holiday he puts his ship on auto-pilot in order to make some tea but his ship is soon struck by a meteor causing it to descend onto an uncharted planet. After the crash landing Olimar wakes up to find that his ship the S.S. Dolphin had been stripped of 30 parts as it entered the atmosphere leaving only the skeletal hull, to make matters worse the engine is one of the missing parts, even worse the planet is home to vicious nocturnal creatures that are all bigger than Olimar and will quickly make a meal of him, and even worse than that the planet’s atmosphere contains traces of poisonous oxygen and Olimar’s life support can only function for 30 days before failing.

There is some good news though, Olimar manages to locate the Dolphin’s engine and even comes across some indigenous life forms that assist him called Pikmin.

Pikmin is a Real Time Strategy game heavily influenced by numbers, the more Pikmin you have working on a task the faster it will be completed, one thing to bare in mind is that each day (other than day one) is timed. Around 15 to 16 minutes equals one day and you have 30 days to gather the missing ship parts to escape the planet, though you don’t need every part in order to escape, but if you want to get the perfect ending you’ll need to get all 30 parts, only 25 parts are required to escape the others are optional but if you want the perfect ending you need those five remaining parts,

The Pikmin themselves are the core gameplay mechanic, they are a mixture of plant and animal. Similarly to Picnic Ants they can carry objects many times their size and when their strength is combined they can help fend off nocturnal predators. There are three types of Pikmin: Red, Blue and Yellow. Red Pikmin are the strongest fighters, they deal the most damage in battle but don’t have much endurance, in addition the Reds are fire resistant. Yellow Pikmin can be thrown the highest and are the only Pikmin type capable of using bomb rocks and finally the Blue Pikmin have the most endurance of any Pikmin and are an amphibious type being able to survive both underwater and on land, they can even act like life guards being able to rescue other Pikmin from water hazards.

The Pikmin themselves have three life stages: Leaf, Bud and Flower. Leaf are slower and generally less reliable due to the fact that Pikmin can trip over more often as Leaves, whereas flowers are faster, stronger and trip less often. Upon defeating an enemy or gaining access to small circular pellets they will take them back to their ships (called Onions) where more Pikmin sprout, only 100 Pikmin can be in the field at any given time and if you sprout any Pikmin after 100 are on the field they will just remain inside the Onion.

The game is divided into five main areas: The Impact Site, The Forest of Hope, The Forest Naval, The Distant Spring and The Final Trial, each area is quite large and (with the exception of the final trial) have multiple ship parts in them, each area has a specific gimmick to it and native enemies, The Impact Site only has two ship parts in it, the first you get on the first day and the second you need blue Pikmin for, The Forest of Hope is where you first encounter the Pikmin series flagship enemy the Bulborbs. The Bulborbs are nocturnal enemies but make too much noise and they will wake up, especially if there are Dwarf Bulborbs nearby which are basically the Goombas of the series. A single Pikmin can take out one in a single hit if aimed correctly, however, a Dwarf Bulborb can wake up the larger Bulborbs if it spots you

There are also some enemies that can only kill certain types of Pikmin, for example the Goolix cannot damage blue Pikmin as its made of water, the Fiery Blowhogs cannot damage Red Pikmin as their snouts are flamethrowers,

There are a large number of positives, one being the enemy verity, the enemies never feel out of place and the closer you get to the end the tougher the enemies get, for example you start off fighting dwarf Bulborbs and Sheergrubs but by the end of the game you’ll be dealing with Spotty Bulbears which are much tougher and can wander around during the day and the king of them all Emperor Bulblax. The soundtrack is also a joy to listen to especially since many songs from this game made it into Smash Bros, my personal favourite is the Forest of Hope it is just the perfect song to start an adventure too.

I wish everything would transpire to plan but sadly it doesn’t for example some enemies can be annoying to deal with like the Burrowing Snagrets half bird half snake creatures that can devour your Pikmin like popcorn, and the Swooping Snitchbug which will pick up your Pikmin, carry them off and plant them in the ground somewhere, this can prove to be a real pain in the distant spring.

Another pain is the Pikmin themselves, not only are they easily distracted by Shiny Beetles, they have the intelligence levels of a Lemming, if left unattended they will carry back items automatically, to make matters worse they’re gluttons. If a single Pikmin uncovers a nectar unit it will drink the entire portion by itself. They’re also not that mobile, every so often they’ll trip and fall flat on their face so you’ve gotta wait for their animation to finish, this takes time and in Pikmin every second counts. Much like the Lemmings, the Pikmin are very trigger happy with their combat so much so that if they’re left unattended near an enemy they’ll attack it and this is often a problem with enemies like the Spotty Bulbear or even Bulborbs as they’re bigger and stronger than most other enemies.

Despite this, Pikmin is an excellent game if you have a Wii or Wii u you can get the new play controls version, the original Gamecube release lacks the ability to travel back to previous days and switch Pikmin types whilst preparing to throw. Despite the Pikmin’s low intelligence, often bloodthirsty nature and a few jerkish enemies, Pikmin is an excellent gateway into both the Real Time Strategy genre and the Speed Running Community, Pikmin is a paradise for those who like to rush through games as fast as possible. find it for yourself and give it a shot