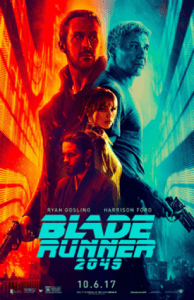 Blade Runner 2049 is a thoughtful, elusive, frustrating film posing a number of interesting questions — not least, how do you review a sequel?

There might be nothing more divisive in cinema today than a franchise. If you happen to be a casual cinema-goer, when a 163 minute sequel to a cult classic appears on the horizon, it may fill you with quiet dread. Do I need to see the original? How much will I be expected to know already? Is this just for the fanboys? Do I really want to become one of them?! Will I be missing out if I skip it?

If the release of Blade Runner 2049 fills you with any or all of the above concerns, then this is the review for you. Herein lies everything you need to know — spoiler free — to help make important decisions about how best to spend your time, your money and your brain cells.

We begin with the cast and characters:

Ryan Gosling stars as Officer K, the loner detective in a dystopian future. He’s a ‘replicant’, meaning he’s an advanced human, created genetically by a corporation, for a specific life-purpose. In this future, such purposes range from hard labour, assassinations and warfare, to bureaucracy, housework and sex. These replicants, though apparently everywhere, are widely despised by society.

K is largely alone in life, save for his one companion, a holographic housewife called Joi (Ana de Armas). Their genuinely affectionate relationship underpins perhaps the key theme of the film, love – or rather the obvious, gaping absence of it in their world. In particular, the warmth of the performance from de Armas works in sharp contrast to the culture surrounding them, one that sees Officer K frequently beaten, demeaned and dehumanised. One of the film’s successes is that their love feels real.

Director Denis Villeneuve creates a vivid backdrop to this story in a series of eye-popping backgrounds depicting an acidic, rain-soaked, corporate nightmare of bright lights, naked flesh, cold cynicism and vile contempt. He perhaps succeeds at this more than with the action sequences, which, over nearly three hours, are rather hit and miss.  In particular, I felt the climactic battle between Officer K and Sylvia Hoek’s brutal killer (named ‘Luv’, with considerably heavy irony) failed to capitalise on either the tension or the profundity that the film was creating.

Some of the performances are equally problematic. Gosling’s character has an ultimately unsatisfying arc, which was possibly the point. He does his job, he suffers and struggles to break out of the narrow confines of his existence.

Ford, as veteran Blade Runner, Rick Deckard, seems to have two main functions: firstly, to provide the film with a splash of humour, via the familiar crotchety-old-man-shtick of his recent career; secondly, to underpin the theme of love (literally miraculous in this dystopia). To his credit, he achieves both with this turn, chiefly because of the deeply expressive nature of his eyes and because he probably is a very loveable, crotchety old man in real life.

Elsewhere, Jared Leto’s deranged, cyborg supervillain felt a little too bland, familiar and, ultimately, unimportant to the narrative. Likewise, the subplot of a replicant resistance force feels frustratingly like it’s being saved for a sequel.

Robin Wright, meanwhile, at least provides dependable support as the tough, ultimately compassionate, police chief. That Wright manages to breathe life into what is essentially an old cop-movie cliché is testament to her ability.

For anyone with a mere passing interest in the genre or the franchise, Blade Runner 2049 will probably prove to be a mildly interesting, diverting way to spend three hours. You may even come away, as I did, into the night sky of an urban cityscape, with an unsettling feeling that our society is partly there already.

If you’re a real fan of the genre and the franchise, you will likely have your own strong opinions about exactly how much has been added (or indeed detracted) with the advent of this movie. I imagine that, for every shiny-eyed, grinning zealot, there is also a dark, hunched figure near a keyboard decrying the existence of Hollywood’s own soulless, replicant-spewing corporations.

How do you review a sequel? By deliberately not referring to the original once.