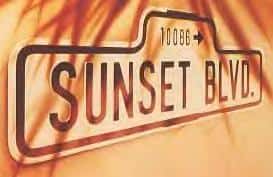 Sitting in the auditorium waiting for the show to start I had my usual sense of excitement and anticipation, but this time it was different. Having never seen this show before, with no sense of what it was about, I was looking forward to finding out.

As soon as the orchestra played the first chords of the opening number, the house lights went down and suddenly I was in another world.

Sunset Boulevard tells the story of a down-on-his-luck writer named Joseph “Joe” Gillis (played by Strictly’s Danny Mac) who befriends an old silent film star, Norma Desmond (played by Ria Jones), who is still under the illusion that she is a big deal.

The chemistry between these two stars on stage is evident and you can tell they’re good friends — which adds to the believability of these two central characters.

The show is full of surprises, one of which being how well Danny Mac can sing — his almost angelic voice reflecting Joe’s naivety as to how in-over-his-head he truly is, but doesn’t realise.

The live orchestra adds a nice touch to the overall atmosphere of the show and immerses the audience in the world of 1940s/1950s Hollywood. The staging is ingenious, with very few set pieces and projections of movie clips from the era in which the show is set — you almost forget that you’re in a theatre.

The main centrepiece, however, is Ms Desmond’s magnificent staircase, which serves as the object that represents both Norma’s mansion on Sunset Boulevard, as well as the sound stages in the Hollywood world.

With the plot, which has many twists and turns that I didn’t see coming, music, set pieces and the maginificent cast — a stand out of which being Adam Pearce who plays Norma’s long suffering Max with an outstanding singing voice — this show is spectacular.

It’s unlike any musical I have ever seen before. It deals with deeper issues than merely the fakeness of Hollywood, but it was still a very enjoyable show and I would absolutely see it again if the opportunity arose.