Review and interview: Seán McGowan wows at the Wylam Brewery and why supporting Billy Bragg is a dream come true 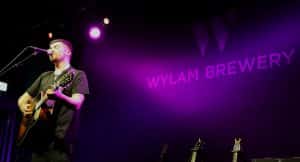 On Thursday November 16, 2017 I had the pleasure of seeing Seán McGowan live at the Wylam Brewery in Newcastle. This was my very first gig and I really enjoyed the whole experience.

The set for the gig was basic, but the soft blue and red lights along with the music beforehand really portrayed a relaxed, yet exciting, atmosphere in the room, and the general chatter from the audience had a vibe of excitement.

Walking onstage to cheers, a smiling Seán introduced himself and explained a bit of a background about himself and his life, which added a really nice touch. He also dropped in a few jokes which made the audience laugh and changed the general atmosphere. He interacted a lot with the audience giving us a little background story to each song, which made the whole experience so much more enjoyable, and created a bond between audience and artist.

He had an extremely likeable personality, which was very genuine and relaxed which shone through during his performance.

The first song he played was quite comedic and funny, but still had an emotional undertone at the same time, and you could see that emotion and passion coming through and it was a pleasure to see someone performing from the heart.

Hearing Seán sing for the first time really blew me away. He had a very unique voice, unlike anything I had ever heard before, and the style of music was new and fresh. I particularly loved that you could really hear his accent while he was singing which added character, and a lovely touch to his voice.

After his show, we had the pleasure of having a short chat with him. 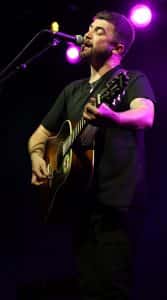 Singer/songwriter Seán McGowan singing one of his original songs.
Photo by Martin Simm

NL: From what we’ve heard tonight your music seems to be inspired by your experiences in life, is this the only thing that inspires you to write music, or are there any other things that inspire you?

SM: Thats a vey good question I’ve never been asked that before. It’s the only thing that inspires me to write my music. I mean, I’m sure I could write music for other people about other things if they were to ask me to, but for my stuff, the way I like to do it is to keep it personal and tell my own story rather than make one up.

NL: It was noticeable that you were putting a lot of feeling into your singing and there was a lot of feeling going into the way you were singing, do you feel you can connect more if you are writing about your experiences?

Sometimes its awkward, to be honest with you, like when you give a little bit too much away, and I’ve had people direct my songs before and ask what a specific line is about, and it’s like I really don’t wanna talk about that. It’ll be like an ex-girlfriend, or whatever it is, and its like come on, don’t… just let it be, let it exist.

NL: Out of all your music to date have you got a favourite piece?

SM: Um… I dunno really, there are songs I don’t play anymore as I’ve played them too much, particularly songs like This Old Town [which] I like never play it at solo gigs anymore, but when I do a full band show I kind of have to play it because everyone wants it so it’s a bit like six of one and half a dozen of the other really. But I think I’ve been writing a lot recently and I think that some of that is my best head and shoulders above everything else, but I think my last EP was the statement definitely a statement.

NL: On social media you stated this been one of the best tours so far, so what makes this tour different to previous gigs or tours that you’ve done? 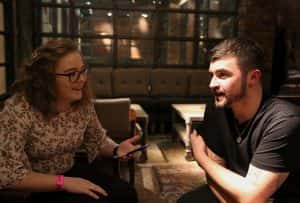 SM: Well first and foremost the is the fact it’s with Billy Bragg. Billy’s the reason I play music…  so the fact it’s [with] Billy is huge. The only thing that can be as good would be touring with Joe strummer and obviously thats not possible, so for me this is like the best thing that could ever happen to me musically… literally. But I think it’s down to the crew, you know, this crew is amazing. Simon was a merch who I’ve become really good friends with. they’re such a well oiled machine because they’ve done it for so long and they’re so professional. You’re constantly learning things, but not only that it’s [the tour] crowds are professional as well. They’ve been going to gigs for years so they know how to behave at a show, and they know the etiquette and all the rest of it. They’ve  just been some of the loveliest people I’ve ever met, and the fact I haven’t been drinking much, I think is honestly a reason I’m enjoying it more… because I’m not hungover!

NL: Does it feel a bit surreal performing alongside someone who inspires you?

SM: Yeah, it’s the weirdest thing ever, its mad. I find it weird when we just bump into each other backstage he’ll just be like “are you hungry?”, and I’m like “I could eat”, and he takes me into his dressing room and offers me anything I want, “take whatever you want”, you know, stuff like that. I’m like “f*****g hell, Billy Bragg just gave me a sandwich! What the f**k?” or “Billy Bragg just whatever… let me have one of his… cups of tea from his dressing room”, you know what I mean? Whatever it is it’s just… he’s just been so welcoming and they’ve really looked after me and its just been amazing.

NL: When it comes to selling your EPs you’ve got a ‘pay what you want’ price for your fans, why do let your fans decide what price they want to pay for your music?

SM: Well the reason we do that is because I played Glastonbury, well it was actually Billy who got me into Glastonbury, and I used to sell the CDs for a fiver and a kid came up to me after we played this amazing set and this kid came up to me with a handful of change, and his parents had obviously taken all the change out of their pocket, and he was asking me if it was enough for a CD. I just thought of course it’s enough, and of course I’m going to give this kid a CD so after I gave the kid the CD the bloke behind him then gave me like thirty quid for one, and I was just like “why?”, and he was like “well you’ve just lost your earnings by helping someone and I’ve sort of got the money to give away”, so I was just like “that’s f*****g nuts what a nice dude”, then it just dawned on me, by having a price on it, you make your music exclusive. In that way, if all you’ve got is a quid then that’s great, and if someone can spend fifteen quid, or a fiver, or tenner, or whatever it is, then brilliant. That way it’s relative, it’s not excluding and everyone who wants it can have it. It’s a bit different with the newer stuff because there has to be prices on it now I’m signed, because my label needs “X” amount and a few people have  said it’s bit shitty and I just think that the money from that goes into my label, so it pays the people who work for me so they can earn a living and take their kids on holiday, or put food on their tables. Not only that, it pays for artists on my label who are my friends, so I don’t think that it’s a bad thing, I think it’s a good thing, but that’s why I do that anyway… in the most long winded answer ever [he laughs].

What advice would you give to aspiring musicians who wish to pursue a career in the industry?

Be nice to everyone, at all times. The biggest thing I’ve noticed, because I work in a music venue, is the dick-heads that come through and never do anything. It’s always the people who are nice to everyone, and polite and respectful that go far, so it’s all like it should be — good for life. But yeah, without a doubt, be nice it’s the most important thing.