There are literally no words to describe how amazing Bowling for Soup were on Saturday night.

The guys played to a sold out O2 Academy Newcastle crowd and certainly did not let their older age be a problem.

Despite the really early stage time of just 8pm, the show was in honour of their 15th anniversary of their debut album Drunk Enough to Dance, so they played the album in full along with a few other classic tracks, which was a real treat.

Their backdrop was an animated screen which at first played Here Comes Bowling For Soup which really hyped the fans up before they took to the stage with a massive TOON welcome.

Throughout the show, the backdrop was mainly an animated bar with frames on the wall that showed old BFS music videos or live camera footage of the 2000 strong crowd.

The lighting effects for each song were absolutely on point and to add to that, the fog machines sent fans crazy with adrenaline and it was only about half way through the show that we realised that there was an actual bar on stage serving drinks to their VIP fans! Can more bands do this!?

Girl All The Bad Guys Want is one of our favourite tracks from Drunk Enough to Dance album so we they started playing that, we were on such a high! The fans were going crazy, even waving in the air a Pokemon character to build up the atmosphere. The only bad thing we had to say was that the song was sped up quite a bit, but other than that it was brilliant to hear such a classic song played live. 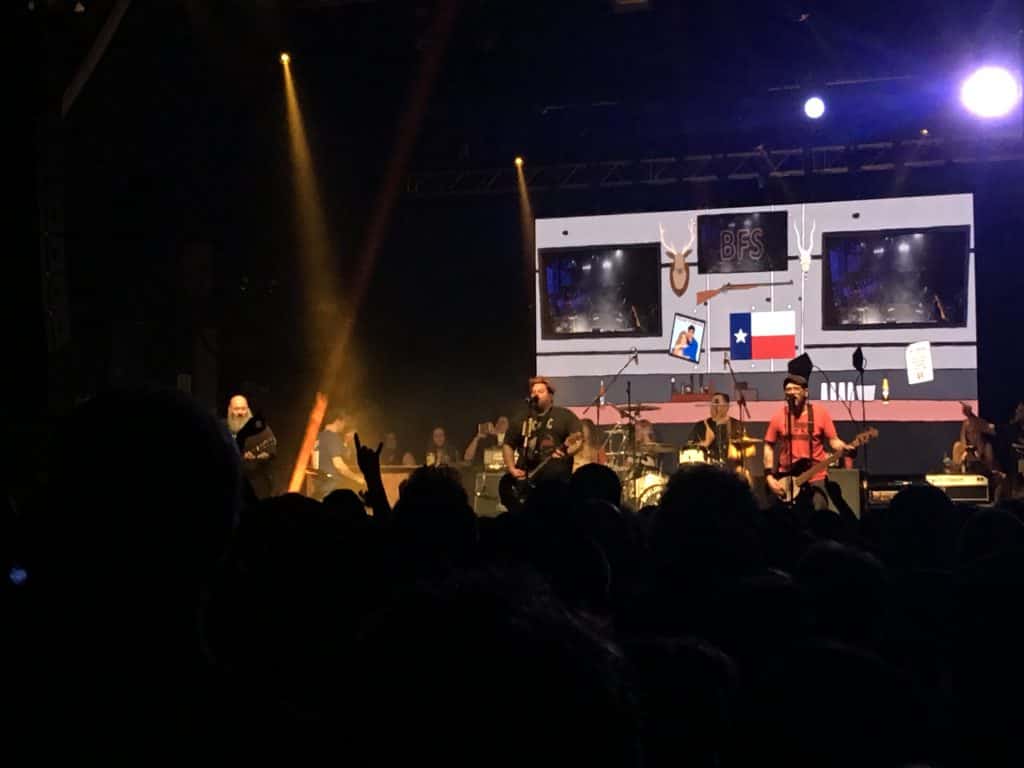 Normally, bands take the group photo at the end of the show, but not Bowling for Soup, they stopped midway through a song to take the photo and even said that Newcastle was always the most attractive crowd that they’ve played too. Awww, thanks guys!

About half way into the two hour show, they started a countdown to their last song 1985. Although with a few technical issues, that kept saying the song would play in an hour, twenty minutes before the end, they kept their spirits high with amazing crowd interaction. We have never seen a band interact so much with the crowd, it just shows how much they love touring.

High School Never ends was one of the biggest tracks from their The Great Burrito Extortion Case album and as soon as the intro started playing, the fans started bouncing with excitement. It was like they were back in their twenties again. The energy they put into, not only just the song, but the whole show was absolutely amazing.

Before we knew it it was nearing the end of the concert. The time went so quick as the band entertained the crowd so well and performed tracks to exceptional standards.

Ending with classic song 1985, everybody was dancing and having an absolute amazing time and the band put on a performance that will never be forgotten. When are you guys coming back to the North East? We’re hoping it’s soon!