On the evening of Wednesday 31 January, I had the pleasure of seeing Shrek The Musical UK Tour at the Sunderland Empire and what a phenomenal night it was filled with of fun and laughter.

I was very lucky when choosing my seats for the show and I managed to get on the front row with an amazing view of the stage and all the actors. When walking into the theatre the atmosphere was instantly exciting and I could see all the green lights shining and ready for the show starting. On stage, there was a huge green book with the letter “S” on it with lights shining on making it the centre of attention as soon as you walked in and as soon as I saw this I couldn’t wait for the show to start.

I had never before seen a show with such fun and so much effort put in that it makes you want to get up and sing and dance with all the cast and it is an experience that I will never forget.

Before the show started, I could hear the musicians warming up and getting themselves ready in the orchestral pit which was located right in front of me and when I heard them, the adrenaline in my body was crazy and I felt like a little kid all over again. The opening of the show instantly drew me and I was thoroughly enjoying it, the instant atmosphere of the music and all the energy from the cast just made me light up and smile.

In the first scene, the audience were introduced to Shrek and Princess Fiona, who I would say in my opinion, are the two main characters, a little bit of a background story was given and then Shrek burst through an open page in the book and gave out the biggest roar and at this point I wasn’t expecting it and did jump out of my seat a little. From this point, the show got better and better and we were introduced to the Fairy-tale characters, Donkey and Lord Farquad. Every single character was outstandingly played especially Lord Farquad who’s character had me non-stop giggling everything he was on stage; this fabulous actor was played by Will Hawksworth and what a smashing job he did.

All the musical numbers throughout the whole show where energetic and exciting and some even had me a little teary eyed too. The actors’ voices where incredible and had me in total awe every time that they sang. The choreography was so quirky and unique, it really stood out and fitted really well with the music and the style of the show. All dances were performed with so much energy and passion it was really enjoyable to watch. 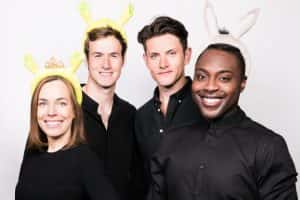 The set design and lights were also really affective when setting the mood for certain scenes and adding emotion and feeling to songs and the choreography, which is one of the most important things to consider when lighting a show, as different lights can create different moods but I feel like this show had all the lights just right and they fitted extremely well with all scenes and choreography in the show.

The ending of this show was emotional and very exciting at the same time as it reveals that Shrek and Fiona are each other’s true love and they share true loves first kiss just before an unexpected event happens to Lord Farquad.

The finale of the show includes all of the cast and a final song which is “I’m a Believer” where the energy in the theatre was on another level and all the audience were clapping and singing along with the cast who were having what looks like a phenomenal time on stage.

Overall, Shrek The Musical is by far one of the best musicals I have ever seen and I would highly recommend to anyone who loves a good giggle, little cry and someone who loves to express their inner child.

I have since seen this musical another four times so far and it doesn’t disappoint it just keeps getting better and better.