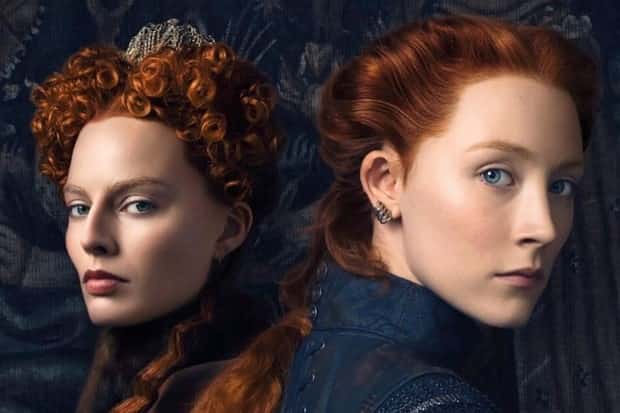 As someone who has a particular interest in Tudor history, I was really looking forward to seeing this film. Margot Robbie plays the part of my favourite English queen, Elizabeth I, opposite Saoirse Ronan in the titular role of Mary.

My main motivation for wanting to see this was because I know almost nothing about Mary, Queen of Scots; the little bits that I do know are all from researching Elizabeth (and those reports paint her as a villain) so I was using this movie as a learning experience.  In that respect I wasn’t let down at all.

I found out that Mary’s marriage to Lord Darnley (Jack Lowden) was quite abusive, and that her Private Secretary, Rizzio (Ismael Cruz Cordova) was murdered as he was suspected of being her lover. I ended up feeling sorry for Mary; it seemed that all she wanted was her cousin Elizabeth to stand by her as her “sister queen” so they could support each other, but Elizabeth was too jealous and envious of her younger, more beautiful cousin.

It seems to me that the two women should have been allies, but their male advisors stirred the tension between them. Robbie and Ronan play their parts perfectly, each putting their own stamp on these icons of history.

For me though, this film was all about the lighting and the shooting of it all. To begin with, there were many wonderful shots of the Scottish countryside that just took my breath away. The beauty of it, but also the remoteness of the Highlands, served as as a metaphor for Mary herself: we see just how alone she really is in the world despite being surrounded by a huge household.

They also used lighting to great effect; Mary’s Scottish court was dark, lit only by candles, to reflect her devotion to the Catholic faith by not having any grand or material goods. This is in stark contrast to Elizabeth’s court, which is bright and vibrant. They’re being portrayed as the other’s exact opposite throughout the film.

Yet the filmmakers have inserted mirrored shots throughout the film in a bid to show that Mary and Elizabeth are not so different. Whether it’s both women looking up to the sky or assuming the same position seemingly at the same time, the message is clear. These two women are in a unique position, both queens in their own right, and their fates are bound together. How they choose to live their lives- and by extension, how they choose to rule – are very different: one chooses to marry and have an heir to further her bloodline, the other chooses to be the Virgin Queen.

Of course with most historical movies there are a few inaccuracies: for example a particular piece of music used in the film wasn’t written until the time of George II, two centuries after the time of Mary and Elizabeth. There is also a massive, well-noted inaccuracy towards the end, however I am willing to let it pass as it serves the film well.

I wouldn’t say this film is enjoyable in the traditional sense. It’s more an experience that you have to sit through, however if you love your history then you will enjoy this film. If you don’t go for the history, go for the costume, go for the acting talent, go for the scenic shots. Even if you find it hard to follow the events at time – I know I struggled to keep up – there will still be something that will leave you feeling amazed.