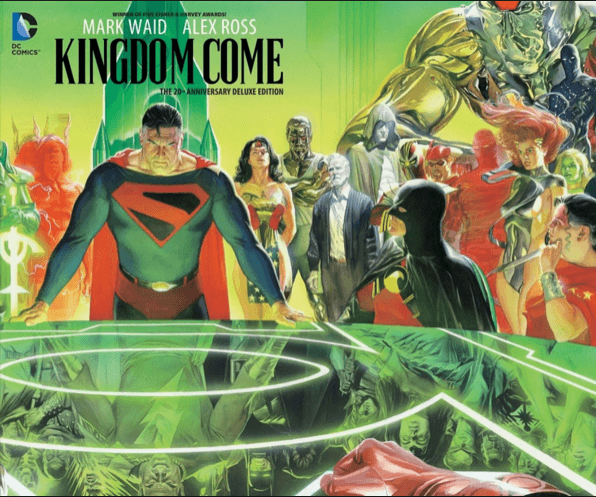 Kingdom Come is an utter masterpiece. It’s quite simply astounding in literally every department. I don’t think I’ve ever seen something quite so beautiful and I’ve seen Blade Runner 2049 in 4K.

I know I’m probably rambling on and gushing about a comic far more qualified and more intelligent people than me have poured affection over, but it bears repeating: Kingdom Come is one of the best and most intelligent pieces of work to come out of one of the greatest storytelling mediums known to man.

The team of Alex Ross and Mark Waid bring this piece to life magnificently, with a painted art style throughout the entire book. Then again it IS Ross and Waid, one of the best writer/artist teams in comic book history, so what was to be expected? Ross is known for his wonderful painted art styles, as can be seen in his seminal work on Marvels, which was basically Marvel’s answer to this comic.

So, for anybody who hasn’t read Kingdom Come, you’re probably wondering what all the fuss is about. Well, for starters, this is the level of quality you can expect from every single page of this comic.

It’s so vivid, so well painted that you can almost feel the life oozing from this one image. That is what the very best comics do, they make you believe in their worlds, their universes and their characters. Alex Ross is absolutely wonderful.

Speaking of characters, this is the purest representation of what Superman is. He represents America, and that comes with every single flaw that America might have. He bears the brunt of his failures upon his back and he takes them all personally because he sees himself as above the rest of humanity. This version of Superman is all that and more, he’s lost almost everything he cares about and put himself into isolation, allowing the next generation of Superheroes to take over. However, that’s where things begin to go wrong.

The future generation cannot be trusted and are much more destructive than the original era of Superheroes. They’ve got all of the power, yet none of the morals. And so it is up to Superman and a newly reformed Justice Society Of America to save the world.

But they go too far.

Superman becomes almost dictator-like and, representing fears of society at the time of publishing, the Government doesn’t like this. So they start a war, a war with Superman that causes so much destruction and death with no real result.

Batman, who is now a cripple thanks to the unveiling of his identity and the destruction of his entire home, comes out of retirement to try to stop Superman for good. A massive battle ensues between the heroes and the Government panics and fires Warheads, attempting to stop them from going too far and destroying the world.

As it stands, that’s a pretty basic plot summation of Kingdom Come, without delving into the deeper themes of Age VS Youth, Paranoia and the evolution of man. Without spoiling too much, the ending is absolutely beautiful and such a perfect culmination to a saga about war and broken friendships.