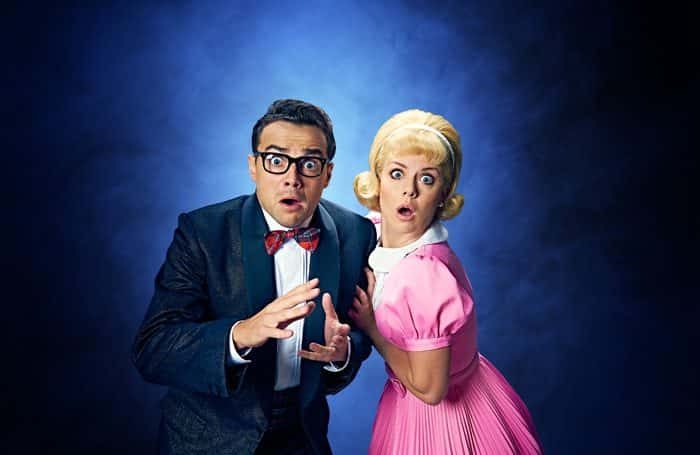 Richard O’Brien’s infamously subversive and erotically-charged rock and roll musical, The Rocky Horror Show, has just begun the fist leg of its UK Tour at the Sunderland Empire on the 28th of January.

The show is running until the 2nd of February at the Sunderland Empire and I was lucky enough to attend the musical’s opening night.

The musical follows two young, old-school-innocent newlyweds, Brad Majors and Janet Weiss. The happy-go-lucky pair are confronted by misfortune when their car has a flat tyre. The pair don’t recognise the area, but notice a castle nearby.

Brad suggests that they should go to the castle to see if they can call someone for help. Brad and Janet soon learn that the occupiers of the castle are peculiar people who are celebrating an annual Transylvanian Convention. Brad and Janet are quickly sucked into their transvestite-esque cult where they are more or less used to satisfy the sexual needs of the master of the house, Frank N. Furter.

I went into the theatre being a novice to The Rocky Horror Show. I quickly observed the cult following of the musical, as most of the audience members around me were dressed in seductive and elaborate nurse and/or lingerie-style outfits like that of the characters in the show. The main star of the show is the infamous Frank N. Furter, a self-proclaimed transvestite from ‘Transsexual, Transylvania”, with impressive abilities to create his own ideal human (who turns out to be the titular character Rocky) in a laboratory.

In terms of the show, the queerness that each actor brought to their characters was not only immensely impressive, but were of a professional caliber that I did not expect. I was admittedly ignorant to the show and its following, but very quickly appreciated how unique and out of left-field the whole premise of the show really is. The production was incredibly fast-paced which worked very well in terms of its entertainment value.

The show never had any dull or slow-paced parts which made myself and those around me very invested in the show as a whole. The props and settings used made the setting very believable, and the narrative world that is shown to convince its audience of its authenticity was definitely successful. The plot of the show is at times hard to follow, but the whole premise is deliciously peculiar, so much so that it feels like watching an experimental fantasy movie.

The comedic moments had a pantomime feel, and the unison of laughter from the audience made the show feel very much like a family viewing of sorts. The Narrator of the show stole each scene in which he featured, and the comical element was reinforced through him when the audience filled the gaps of the sentence in as he told the story of Brad and Janet.

For example, in a scene before Janet is seduced by the ambiguous Frank Furter, the Narrator goes to label Janet a virgin, but the audience interrupted him and shouted “slut!”, which the Narrator responded with comebacks to make the audience laugh whilst simultaneously maintaining their attention. I was unaware how crude the show would be, especially when Frank seduces Brad and Janet. The sex scenes are more or less acted out (no nudity featured however) whilst combined with comical dialogue that removed any potential discomfort; that said, it is definitely a musical that has its niche purely for adult viewing.

The singing voices of all of the cast members were flawless, and each of the songs were relevant to the story and flowed more or less perfectly. I adored the soundtrack, specifically the songs “Over At The Frankenstein Place (There’s A Light)” that featured in the exposition of the narrative when Janet and Brad’s car breaks down, “Toucha Toucha Toucha Touch Me”  which is a sexually charged number from Janet who is trying to get Rocky to sleep with her and help her feel ‘dirty’, and of course, the song synonymous with Rocky Horror, “Time Warp”. During this musical number, more or less every audience member jumped to their feet to act out the choreography, myself included.

The lead of the show, Frank, was terrific in his promiscuous numbers, especially his introductory number “Sweet Transvestite“.

Overall, the UK tour of The Rocky Horror Show is an unmissable event. The production is extremely professional, consistently entertaining and has become one of my favourite musicals of all time. The performances cannot be faulted, the soundtrack is very uplifting and the whole premise of the show is timeless and so relevant in today’s culture in terms of its themes of sexuality, sexual expression, gender roles and the concept of gender as a whole.

An incredible theatrical experience that I would recommend. After seeing the show, I can without a doubt state that the cult following of The Rocky Horror Show has a new member.