This movie can turn you into an emotional wreck. As well as being one of the reasons I’m no longer allowed to pick movies in my family, it allows for a more developed connection to characters, as you follow Mia (played by Chloé Grace Moretz who is largely known for roles in Carrie and Kick-Ass) through something no one should experience.

The movie adapted from the young adult novel by Gayle Forman in 2014, allows for viewers to follow her through the aftermath of a lethal car accident that took the lives of those she would hold dearest. Through the use of flashbacks, the characters are built and given dimension leaving you connected to the protagonist, as she suffers through loss of her family members.

Adapting a take on a comatose state like something that would remind you of the out of body experience – such as Patrick Swayze as Sam in Ghost or like Reese Witherspoon’s experience in Just Like Heaven, when she wanders aimlessly around the hospital finding out the devastating news one by one that members of her family have died until she is the only one left. The idea of an out of body experience could seem over done however, it offers something new, rather than having to save someone or having to be saved. If I Stay provides dilemma of what’s left to live for once your family has gone that addresses the impact of loss and grief.

The stark contrast in the use of colour in scenes aids in setting the tone the director (R.J.Cutler) aimed for. Scenes that are set in the present all appear pale, with grey, white and pale blue being all over the hospital walls and the initial aftermath of the crash. In comparison flashbacks appear warmer full of life, they are accented with oranges, pinks, reds and browns. As if reflecting how her life has changed from being warm and full of life with her family to being empty, cold and isolated as they are torn from her.

Not only that but the flashbacks show the progression of Mia and her relationship with Adam, the impact of this being that you are provided with Mia’s view of Adam which can be shared by audiences. This provides for a rather negative view of Adam to be built which is promptly changed at the end of the movie when the truth is shown about him. The emotional tone of the movie is furthered through him sing ‘Heart like Yours’ at her bedside.

It is possible to justify one of the more final scenes in being the most effective in obtaining a reaction from viewers, as her friends and family wait for her recovery. Her best friend Kim, begging for her to live, is only topped by her grandfather, quietly sitting down the short length of silence allows for a solemn undertone to be brought forward. This is when you will start reaching for the tissues as Stacy Keach croaks out: “If you want to go I want you to know that’s ok. I understand.” An emotional moment between a grandparent and their grandchild that leaves viewers weeping, as her grandfather is the only one who has told her she shouldn’t feel bad for not wanting to live without her family. 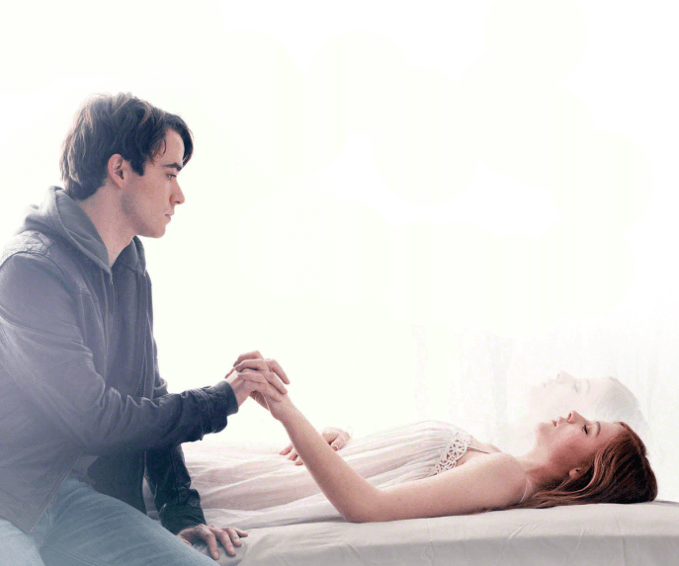 As much as the movie has you on the edge of your seat wanting to know if she chooses to live – also screaming at the TV for her to live, you are a little perplexed at the choice for some of the editings. With Mia at the end walking into white space leaves the audience panicked that she died, but you get ripped away into relief as it jump cuts to the sound of her gasping and her eyes opening before it ends.

The acting in the film provides a heart-wrenching experience and the soundtrack pleasantly accompanies the feeling of despair that is implemented throughout. The ending is honestly my favourite part of the film as you don’t expect it, and it fills you with relief and leaves a rather sad film on a happier note. The film is worth watching for anyone that wants a good cry and provides a new view on grief and loss. For being a young adult movie, it provides a more mature look at something that would generally for a young adult movie, be filled with more of a light-hearted tone rather than showing the full impact of what happened on Mia – ultimately making the movie more relatable for audiences.