Cold Pursuit Review: not a “Taken” movie on ice 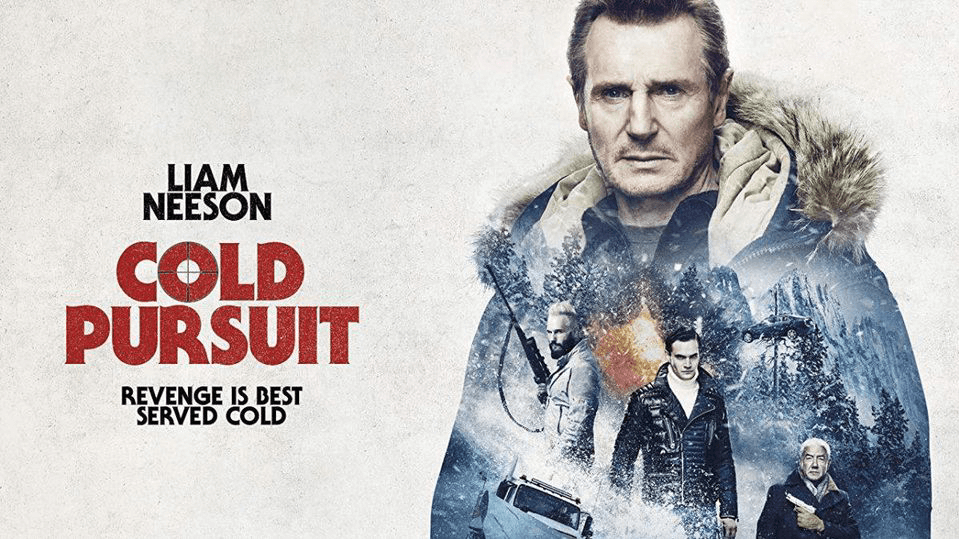 Just yesterday, I went to the cinema to watch Liam Neeson’s new feature Cold Pursuit. My reason for going was purely academic research, attempting to study the critics’ reception of the movie following Neeson’s racial comments.

For context: set in the snowy hills outside of Denver, Cold Pursuit follows Nels Coxman (Liam Neeson), a snowplow driver in Denver, Colorado, who embarks upon a murder spree of a gang drug dealers to avenge the killing of his son by said gang.

First of all, I wish to state for the record that if you are under the belief that Cold Pursuit is a rendition of Taken on ice (as some critics have put it), you will be deeply disheartened. In my opinion, this movie is Liam Neeson’s worst, and that opinion has nothing to do with the recent racial controversy, it is just simply a terrible film.

Cold Pursuit is a movie that has no idea what genre it is, and this unsureness is hidden under  the guise of “creativity”.

This movie cannot decide whether it is a black comedy, crime or a thriller. In one particular scene, Nels and his wife Grace (Laura Dern) are presented with their son’s dead body on a slab. The slab is low on the ground, and the coroner pumps it up higher and higher until it is in the eye line of the viewers. There is no music in this scene, except from the squeaky sound of the slab being heightened. If the director was trying to make this a funny sequence, he very much failed.

This was meant to be a scene of sorrow: two parents have lost their son, yet there was no sadness to this scene, which made me dismiss this movie’s credibility.

The first half of the movie follows Nels as he kills each drug dealer. After Nels takes a victim, the screen goes black and features a cross or icon with the victim’s real name and gangster nickname. As the body count quickly rises, you can imagine how frustrating it was to see a blacked out screen with gravestones written on every two minutes.

Also, as an audience member who is trying to invest in a film, the fact the screen keeps cutting to black just takes away from it being an immersive experience, as you are constantly reminded that you are watching a film. Perhaps this style was the Norwegian director Hans Petter Morland’s attempt at being innovative, but it had no such effect on me, merely reiterating to me that this is not a good piece of work.

The ways in which the drug dealers are killed are ridiculous. In one particular scene, Nels and a drug dealer are laying in the snow laughing at nothing particularly comical, right before Nels shoots him in the face.

The acting in this movie was just horrific. While I would not credit Liam Neeson as a versatile or particularly outstanding actor, his acting in Cold Pursuit is his worst, without a doubt. His character, Nels, is not someone we are positioned to sympathise with in my opinion, nor is his character’s supposed “love” for his son believable. To me, his character had no complexity or multi-dimension.

Laura Dern, who plays Nels’ wife, Grace Coxman, is given probably two minutes of screen time before she leaves the film for its entirety. Dern, whom I first became a fan of after seeing her as Renata Klein in HBO’s hit Big Little Lies, is a great actress who is totally wasted and discarded in this film. Like Nels, Dern’s character Grace has no dimension and we do not feel any emotion towards her.

I don’t know whether this is down to the direction they were given by Hans Petter Morland, but Neeson and Dern (two of Hollywood’s respected A-Listers), are represented here as actors who, apparently, cannot act.

The worst acting in this movie, however, was that of Tom Bateman who plays drug lord Viking. I cannot put into words how terribly he played the role of a villain. However, again this could just be how Cold Pursuit was written (the character of Viking could be intended as a futile villain). Whatever the case is, the acting and everything about this movie left a bad taste in my mouth.

This movie may as well have no premise: it is mainly just people being killed, a futile “plot-twists” and Liam Neeson driving through the snow in his snowplow or car.  The most used shot in this movie was a tracking shot of cars driving into Denver, which occurred in the narrative at least 10 times (unnecessary? I think so).

Some shots are so repetitive that by the second half of the film, you’ll find yourself combusting with disbelief-induced-laughter upon seeing Liam Neeson driving his slowplow. Also, by the second half, a rivalry between Viking’s drug gang and some Native Americans emerges that serves no purpose whatsoever.  Meanwhile, the location of the movie, while beautiful, does not work for it either.

In a nutshell, I am stating this movie would have been better of never being made: this is by far one of the worst films I have come across in my twenty years of existence. Save your time and money and do not see this movie.

As Cold Pursuit is a remake of the director’s own 2014 movie “In Order Of Disappearance“, I would hate to see how diabolical the original is.