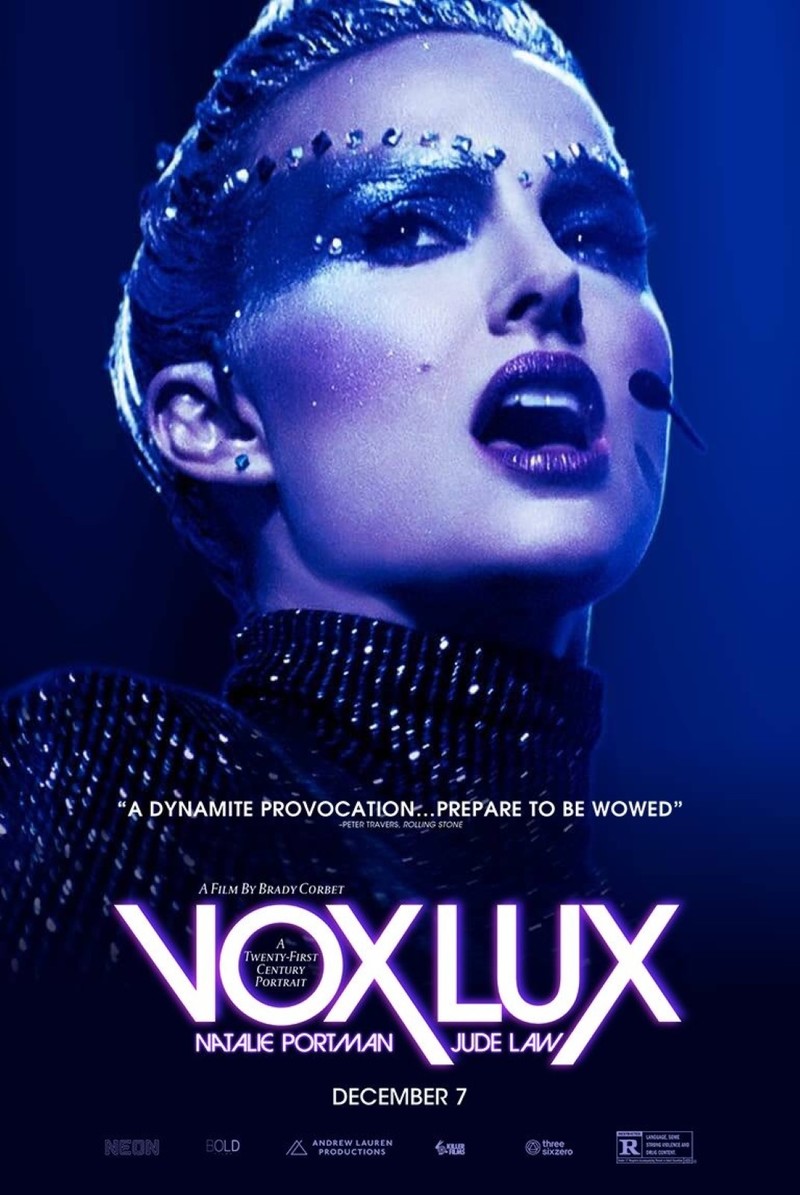 Brady Corbet’s feature length movies have often been described as chilling, uncomfortable or simply tense. As my contemporaries have applied this to The Childhood of a Leader, his debut feature, I’d be inclined to agree with such comments after experiencing Vox Lux.

Following the story of Celeste Montgomery (Raffey Cassidy/Natalie Portman) and her rise to stardom, Vox Lux focuses on the behind the scenes lifestyle that shapes the stage persona of Celeste. With supporting roles from Jude Law, Raffey Cassidy and narration from Willem Dafoe, Vox Lux has a lot of build up from its cast alone.

What’s upsetting then is that, given such a strong cast, the movie flounders when anyone of noteworthy recognition steps in. Jude Law’s role as The Manager is fine but he’s there more or less as background filler in an otherwise empty movie. Dafoe’s narration interrupts the flow of the movie every now and then, but at least the dialogue he’s given doesn’t completely shatter the pacing of the movie.

Portman, in particular, isn’t much of a spectacle. After the first hour of the movie, we’re concluded with a final third act that stretches for the remaining hour. Within that hour is a poor Portman performance, one that tonally ruins the first hour of the movie: the pacing and the nice, slow build-up of Celeste as a character are all spoiled by Portman’s time on screen. It’s not because it’s a particularly terrible turn, it’s just bland and jars badly with Cassidy’s earlier performance.

Cassidy, on the other hand, is incredible. From the earliest scenes it seems the movie is set on building her as the next big catch for any film production. Her performance is solid enough, and although heavily overshadowed in the last hour of the movie, still provides a strong enough performance to keep her consistent.

The most convincing part of the movie is Corbet’s direction, one that balances auteur perfection with genre and Hollywood conventions of dramatic pieces; conventional tracking cameras coincide with long, unbroken shots and extreme close-ups. If it weren’t for the shaky performances, then the pacing from the direction would be more than enough to make Vox Lux an incredible cinematographic study.

Vox Lux flounders strangely, amid sparks of creative inspiration. Occasionally, it captures a clairvoyance beyond that of any other movie, and other times it simply fizzles up, crushed under its own weight of auteur cinematography.

It’s a weird experience to see unfold, but one I’m thankful for. It’s emotionally manipulative, yet a piece of film worth seeing, even if it is just for the first hour or so. More or less a dark and disturbing version of A Star is Born, Corbet’s second feature film is a solid attempt at bringing dramatized lifestyles and behind the scenes of the pop music world together.