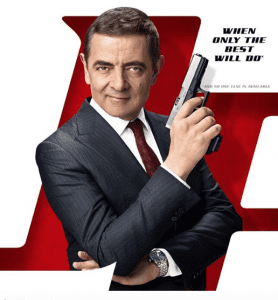 I have a complicated relationship with the Johnny English franchise, to say the least. As a kid, I loved them. But as I grew up, and rewatched them, I realised that I wasn’t really a fan of them at all. Perhaps I was watching through the eyes of a child at the time, or perhaps I was swayed by the fact English himself is played by Rowan Atkinson, but I didn’t find myself enjoying them anywhere near as much as I grew up. So the big question for me was this. Could a film, released seven years after the last one, recapture the feelings I felt watching the original films as a kid? Could Johnny English Strikes Again finally relight that flame? Could Johnny English Strike Again?

Johnny English Strikes Again is one of those rare films that I feel very apathetic towards. It’s very much a middle of the road type of film, one that I wouldn’t rewatch alone, but I wouldn’t say no to having on in a party in the background.

So basically the plot of the entire film is that technology is evil and made by the devil. Not really, but it’s so much easier than listing the entire plot. Basically, there’s a painfully obviously evil American young man (why are they always young?) who is trying to steal all the worlds data and it’s up to Johnny English to stop him once and for all.

In terms of cast, it’s pretty much a no-name cast except for three cast members. Rowan Atkinson is great as Johnny English, but I don’t think there’s a situation where Rowan Atkinson isn’t great. Ben Miller plays one of the most wasted roles in his career as Angus Bough, English’s sidekick. He’s good, don’t get me wrong, but an actor of his calibre is completely wasted. The only other main cast member of any note is Emma Thompson as the Prime Minister, and this is one of the dullest roles of her career. There’s also the villain of the piece, Jason Volta, played by Jake Lacy. He’s unremarkable, he’s far too hammy to ever be actually considered a threat by the audience. Also, and I have many questions about this, they got Michael Gambon to play a bit part in the film. Why not get HIM TO PLAY THE DAMNED PRIME MINISTER INSTEAD? It’s telling when Gambon is probably one of the best parts in this whole affair.

The film managed to elicit a few chuckles from me, at the very least. The dance scene, in particular, made me laugh. Just seeing Rowan Atkinson flailing his limbs is enough to make me laugh. The whole message of the film, however, is extremely muddled and quite frankly outdated. It’s basically just ‘technology is evil’ and it comes approximately 20 years too late to be even remotely relevant. Still, the film isn’t totally awful, otherwise, it wouldn’t have elicited a few laughs from me.

Overall Johnny English Strikes Again is an occasionally fun, but often muddled and sometimes just downright awful film. It’s strange how they keep making these films, years after the previous film. It’s not like they’re well known worldwide or anything. It’s worth sticking on in the background of a party, but nothing more.